Home / Issues / March 2018 / The Epic Landscapes of the Cabot Trail

Nova Scotia has plenty of sought-after roads for motorcycle enthusiasts. I’ve been to the East Coast of Canada now a couple of times, but this was the first time that I had a chance to explore it on two wheels. For those of you who’ve had the opportunity to travel east, you quickly realize that there is an abundance of twisty roads, tasty food and beautiful scenery.

Fortunately for me, my brother-in-law, Shawn, was my local tour guide for the three days that we spent riding in Nova Scotia. We’d had this trip planned since last winter, and now it was finally time to explore the east coast. With the bikes cleaned up and saddlebags packed, we got an early start from Shawn’s house in Mount Uniacke, a few minutes northeast of Halifax. The bikes rolled toward the eastern shore with a destination of Cape Breton, where we’d spend the next two nights. Heading east of Dartmouth, we took the scenic route along Highway 7 (Marine Drive) through some abandoned fishing villages before stopping for lunch and fuel. It was hard to keep my eyes on the road, as there was plenty to take in that I wouldn’t normally get to see as an Ontario native.
Turning north onto Hwy 7, we twisted the throttle a bit harder and leaned the bikes over heading toward Antigonish. At that pace, it wasn’t long until we reached the Canso Causeway and crossed onto the island. Day one was pretty much complete as we rolled into the vacation home we’d rented about 30 km from Port Hawkesbury, overlooking Bras d’Or Lake. 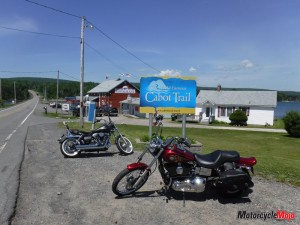 Day two started off warm and sunny. I wasn’t sure what to expect weather-wise, as it can be pretty unpredictable in Cape Breton. Adding a few extra kilometres to our day, we made our way back toward Port Hawkesbury to cruise north along the western shore on Hwy 19. We decided that the best route to ride the Cabot Trail would be to run it counterclockwise, which would keep us on the outside lane for the trip. Margaree Forks is where we started our loop on the Cabot Trail, taking us southeast toward the 105 and Baddeck. Cruising along Second Lake O’Law, I had a bald eagle pace alongside me for approximately a half-kilometre; what an experience that was as I watched it glide beside the bike along the lake. That alone made the trip worthwhile.

The eastern side of the Trail heading north was not a fast section, as the summer traffic slowed things down a bit. We had time to pull off onto some of the lookouts for a break and take in the scenery. Cape Smokey was probably one of the best roads I have ever been on with my motorcycle: turns that tighten up on themselves will have your pegs scraping the pavement, not to mention the vistas you’ll encounter while making your way up the mountainside. A stop at the biker-friendly Coastal Restaurant and Pub in Ingonish for lunch meant we had to try the Coastal crab dip, one of its well-known featured dishes and a reason for being on the Food Network’s You Gotta Eat Here. Shortly thereafter, we were riding through Cape Breton Highlands National Park. Park passes were free this year to celebrate Canada 150 – a nice bonus.

After riding through a few construction zones and being slowed down by tour buses, the road opened up once again for a quick cruise beside the Skyline Trail on the western side. The elevation changes along the coastline are breathtaking, with kilometres of winding roads that will please everyone. We had to be back at the cabin before dark and so quickly hammered the throttle back toward Margaree Forks, and once again across the section we’d completed earlier that day to the 105. Highway running was all that we had left as we completed just less than 600 km for the day. That leg of the journey ended with some meat on the barbecue and a few drinks to wind down as we discussed the highlights from one of the best days that I’ve ever had on the seat of a motorcycle. The Cabot Trail can be completed in one day, but for those who would like to take their time, it’s definitely worth exploring everything along the way. Waking up on our last day to partly cloudy skies, we still had 300-plus kilometres to get back to Mount Uniacke.

With rain in the forecast, we loaded up the bikes and throttled our way back along the freeway to finish up our trip. All in all, we lucked out with the weather, and I got to spend some quality time with Shawn and talking about motorcycles for three days. With no shortage of seat time, this was a trip that won’t be forgotten any time soon. Opportunities The East Coast has a lot to offer motorcycle riders, and for me in particular, it was an adventure I’d not had the opportunity to experience previously. This three-day, 1,400 km round trip will always be on the top of my list of favourite places to ride. The roads may be a little rough in some areas, but the beauty of being on two wheels is that you can always pick a smooth line. With its shortage of straight roads and abundance of epic landscapes, Nova Scotia is definitely a must-ride, and I’m already looking forward to exploring more of what it has to offer.