So many what-ifs. But one thing is for sure, Crocker pushed the envelope and developed the most powerful American two-wheeler of its day

Al Crocker was born outside of Chicago in 1882, and after graduating from Northwestern University with an engineering degree, he went to work just after the turn of the century for the Thor Motorcycle Company based in Aurora, Illinois. There, he achieved success racing various high-performance Thor V-twin models, in the course of which he formed a friendship with his rivals George Hendee and Carl Hedstrom, the founders of Indian. By 1910, Al was working as a designer and engineer at the Indian Motocycle (as it was originally spelled) Company in Springfield, Massachusetts. 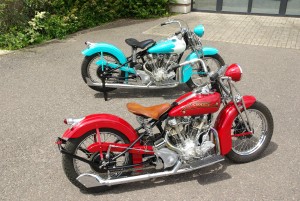 Crocker duly turned his attention to selling the bikes he’d helped create, taking over the Indian agency in Denver, Colorado, in 1913, then managing Indian’s branch office in Kansas City, Missouri. In 1928, he settled in Los Angeles after having acquired the Indian dealership at 1346 Venice Boulevard, which in due course became the Crocker factory. There, Al hired a talented young engineer named Paul A. Bigsby, and together the pair got involved with the sport of cinder-track speedway racing. The company began making frames from 1931 onwards to accept the 750 cc
Indian Scout V-twin engine, and an overhead-valve conversion for the Scout motor soon followed.

But after his V-twin speedway racer’s first season of competition in 1932, Al recognized that a single-cylinder engine made the most sense for dirt-track racing. So, he developed his own such motor, a 350 cc OHV design around which he built a reputed 31 complete motorcycles between November 1933 and 1936, of which 12 are believed to exist today.

This Speedway single was the first complete Crocker motorcycle, and proved superior to its American rival, the Harley-Davidson CAC. It was, however, slightly down on power compared with the imported British JAP-engined bikes running on alcohol, which would dominate the sport for the next three decades. The Speedway single was thus abandoned, and Al Crocker – already aged 54 – moved on to fulfil another ambition: constructing a class-leading V-twin road bike that would be the fastest thing on two wheels in America, and maybe the world.