Five strangers sharing one bike during  a 37-hour relay race can be problematic, but it also builds a stronger team

“Baja favours no one.” I remembered fellow Pikes Peak racer Carlin Dunne’s words well as my Honda 450 bounced off the rev limiter on a dusty mountain road leading out of Ensenada. My first section of the 2017 Score International Baja 1000 was to get our team GoBajaRiding.com Honda CRF450X from the start, in downtown Ensenada, to my waiting teammate a couple of hours away in the mountain village of Ojos Negros. Our race started at 12:45 a.m. on November 17. The racecourse out of town was lined with locals partying it up – loud music, bonfires, cheering and flashing lights. It’s a pretty chaotic scene for a dirt bike racing through the night.

Our team entry for this 50th Anniversary Baja 1000 was an effort of Bruce Anderson from Riverside, California, a six-time Score Baja Series Champion. The rest of our team were Baja rookies: Tony Wilkinson, 45, from Kelowna, B.C.; Matt Weber, 48, out of Delafield, Wisconsin; Scott McCune, 55, from Rockport, Texas; Marty Heitmann, 54, from South Okanagan, B.C.; and me, Shane Scott, 53, from Moncton, N.B.

A Change of Plan 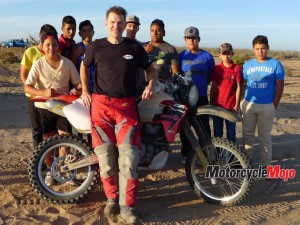 We were entered in the Pro 40 class because of Anderson’s record, but as a twist of fate, he broke his leg in a pre-run crash. His riding talent would be missed. Anderson is a well-known fixture in Baja, and the owner of GoBajaRiding.com, a bike and buggy tour company. He knows the peninsula like the back of his hand. And he soldiered on, broken leg and all, to manage our team along 1,134 miles to the finish.

Over the next 37 hours, our team handed off the same bike to each other 18 times for two- to three-hour stints, plus 26 pit stops for gas, air filters, headlights and tire changes, and we rode through 154 checkpoints and 20 speed-limit zones. Time penalties are added onto a team’s finishing time for being off course or for speeding in towns. Our team finished with no penalties.

My second section started at race mile 131 at 5 a.m. The crew quickly fuelled up the bike and changed the air filter; there were a few bikes that had already failed due to a clogged filter. The dust was brutal. I worked a speed zone down the San Matias Highway for a few miles, then veered off-road for the rest of the section. It was just a gnarly stretch of endless tight and deep whoops with a smattering of boulders just looking for a front rim to crush. Over the previous four days, our team rode the entire course to familiarize ourselves with the terrain and make a plan for the race. I ran this section 20 per cent faster than in the pre-run, and in the dark handed the bike to Wilkinson, who then disappeared into the night. So far, we were beating our plan.

My third section was Baja at its best, tearing through a beautiful wash valley in the midday heat. I started to get some desert riding skills down, skipping lanes side to side to rail outside turns, floating over loose rock beds, staying on top of the whoops, blasting through silt beds, etc. The riders who grew up in this terrain are truly impressive.

The Toughest Section Yet 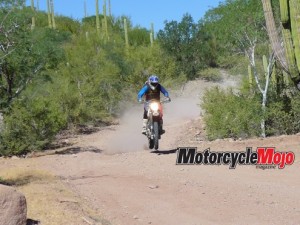 My fourth section was just a world of hurt, 58 miles to Loreto from 12:45 a.m. to 3:15 a.m. Words of wisdom from the team captain were “Just survive this.” Lots of rocks and plenty of sand with a happy helping of silt. Silt is like fine baking powder. The silt beds can be bottomless, so the rule of thumb is, “just pin it and never let off.” The crew had mounted the big dual 8” Baja lights, giving tremendous light. The downside was that they are very heavy and it takes some muscle to navigate this slow, technical terrain. My broken collarbone was reminding me it was still not healed.

The 800-plus horsepower Trophy Trucks were catching me at that point and passing. The first hint of one approaching was the black desert night suddenly lit up like white noon with a trillion lumens of LED. Next was the unmistakable growl of the most pissed-off-sounding race engine on the planet. Team orders were “Never look back, get off the course!” Seconds later, they would rage by and leave me blinded in a swirl of sand, only made worse by my own light beams bouncing back off the plume of dust. There was nothing to do but stay still and wait for it to settle enough to start moving. It was an eerie kind of thrill.

The last mile of this section was a steep rocky uphill that winds back and forth up the mountainside. I was too exhausted to stand up anymore and I could barely feel my hands. But I floundered to the top and soon rolled into our pits to hand the bike over to a waiting McCune.

My fifth and final section, a 90-mile, 2.5-hour rip along the Pacific coast in perfect weather was a race highlight. It was definitely my favourite section of the race. I mostly enjoy fast and flowing high-speed stuff that calls on bravado more than talent. This section delivered. The Honda was tapped out often. Catching long, low air off some of the hill crests was the game of choice. Crowds of locals all along the racecourse were cheering racers, partying and camping – a pretty cool scene. Taking quick glances over at the killer surf roll into the pristine beaches just put this experience over the top. This race is a huge deal in Baja California and the estimated spectator numbers along the racecourse are over 400,000.

I had keen eyes on a lookout for cows and such wandering onto the course, which is common in this section, and has really messed up some racers in past years. A few times I backed out of the speed, not wanting to be the guy who crashed our team out of a finish this close to the end. Around race mile 1,100, I spied Wilkinson and pulled over for a quick rider change. He roared off to bring it home 1.5 hours later. 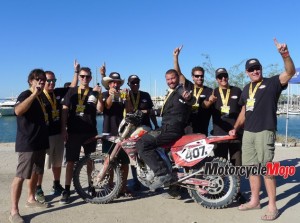 The team piled into the trucks and bombed it to the finish line in downtown La Paz. The mood in the bus was noticeably lighter and the racing stories were flying. Our team’s race had almost come to an end on a couple of occasions. In Wilkinson’s first section, he had been making great time coming into San Felipe and had passed numerous bikes. He then realized he had gotten a little off course in the wide open dry lake area. He could see the dust from the racecourse about 250 yards to the north and decided to bushwhack it over. As Wilkinson explained: “I had gotten to 40 yards from the course and felt the back tire lock up on me. I looked down to see the back rim wrapped up to the sprocket with rusty, thick Mexican barbed wire. It sent the fear of failure and helplessness through my whole body.”

The smart Baja racer carries a certain number of key tools in his or her backpack, one being a quality Leatherman multi-tool. Wilkinson attacked the tangled mess, cutting, hacking, pulling at the wire as piece by piece was removed. Adding panic to the procedure, he could hear all the bikes that he had passed, and more, ripping by him. Completely drenched in sweat, but feeling a massive relief, Wilkinson brought the Honda to life and rejoined the race. We had lost some time, but he had overcome a showstopper!

A second, more serious incident occurred on McCune’s night section out of Loreto around race mile 850. McCune referred to this section as the “watermelons and cantaloupes tour.” The racecourse follows a riverbed that is entirely covered in huge, smooth boulders packed tightly together. Making it worse are 20-plus river crossings where these boulders are wet and slippery and can’t be seen. Adding to the fun? It’s 4 a.m., pitch black, foggy and cold. For a Baja rookie, it doesn’t get thicker than this. One of the watermelons got to the Honda on a river crossing and the Texan went down, submerged. Up quickly, McCune dragged the bike ashore. “My mind was racing. I didn’t want to be the guy who caused the team to DNF.” He picked the front end up and drained water from the internals. The electric start was no longer working, so the endless kicking began, trying to clear the water out of the system. Hours passed, and things were looking bleak for race bike 407x. Back at the bus, we were informed the bike was no longer moving.

Because of the remote area, there was little for us to do but wait and hope. Then, oddly enough, a Lawrence Team support truck appeared out of nowhere. The crew pitched in until the soggy Honda came to life. Everyone was out of the bus to greet McCune a few hours later when he rolled in wet and exhausted. We had lost a significant amount of time, but the team was buzzing. There were so many teams out of the race at that point, and we were still moving.
When the bus pulled into the Finish Line area in La Paz, Wilkinson and the 407x were already there. We made it! Historically, half the entries do not finish the Baja 1000. On this day, we were in the better half. High-fives, back slapping and bear hugs all around. The champagne was spraying, and rightfully someone uncorked the Don Julio tequila bottle.

A week ago we were all strangers, and today brothers in arms celebrating our first Baja 1000 finish. Our time of 37.24 hours ranked us 148th place out of 405 entries, and sixth place in the Pro 40 class.

After the dust settled I heard some talk about next year’s race. That’s Baja.