Decades of sacrifice deserves a one-off  paint job to honour a special veteran.

A few months ago, a friend of mine sent me a video of a bike reveal she did for a client of hers who is also a veteran of the Canadian Armed Forces. She had custom designed and painted his Harley Wide Glide in a unique and brilliantly beautiful manner, and recorded him seeing it for the very first time. The caption on the message said, “Try not to cry.” Moments into the video, tears were streaming down my face as I witnessed her client, and now new friend’s emotional reaction to finally seeing his bike and the incredible completed custom paint job she surprised him with. I knew I had to write his story and share photos of her talented work.

Bill Cameron only started riding a few years ago but already feels like a seasoned and forever rider. What he loves most about being on his motorcycle is the freedom and the fact that he isn’t in a big hurry to get anywhere. When in a car, he is always white-knuckle driving and swerving in and out of traffic, feeling frustrated. The anger and frustration he often feels has a lot to do with the fact that he is dealing with post-traumatic stress disorder from his 32 years of service in the Armed Forces. All that disappears when he gets on his motorcycle. He can relax more, and enjoy the freedom that riding brings. 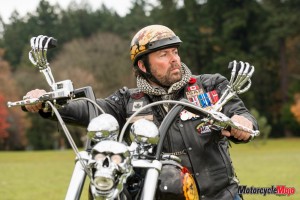 So far, his fondest motorcycle memory is from this past year’s Toy Run in Port Alberni, B.C. “Bringing toys to donate, and raising awareness was incredible, as was riding through the township with people on both sides of the street and over 2,000 bikes riding together in one huge group.” He continues, “It was a pretty big feeling to be doing something for the community and to see such a huge support group for all of us riders.” It really touched his heart, and made him feel special as a rider and connected to the community.

After spending some time getting familiar with his bike, he decided to make it more original with a custom paint job. “I decided to customize my bike because in the past, I have done it with every car that I have owned. I like to put my own spin on things and could never leave anything stock,” Bill explains.

“I have bought and sold more cars over my time and lost more money doing it,” he says, laughing. “I seem to put all kinds of money into customizing classic and modern cars. The crazy thing is that I always ended up selling them anyway and I’ve lost all kinds of money but just kept doing it.”

This One’s a Keeper 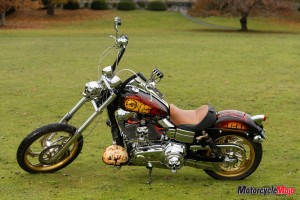 But when Bill bought his first motor-cycle, a 2010 Harley-Davidson Dyna Wide Glide, he knew that he would never let it go. Ever.

“I started having all kinds of ideas of how I might customize it, and a lot of them came from watching TV programs like American Chopper,” he says. Initially he wanted something to do with ghosting skulls. “I have been a big fan of skulls for a number of years and have skull tattoos all over my arms.” After a lengthy conversation with some friends that he used to work with about his desire and ambition to build his custom bike, he was put in touch with my friend Debbi Ferguson.

Debbi is well known in Victoria for her incredible custom paint jobs on bikes and helmets (fergyscustompaint.weebly.com), and Bill felt he’d be able to connect with her, as she, too, is a veteran. He told Debbi about his idea to take his basic black bike and turn it into something really cool and special by adding ghosting skulls and flames all over his bike. “Boy did that ever change!” he says. After consulting with her, the project took on a very new dynamic.

Understanding the Job at Hand 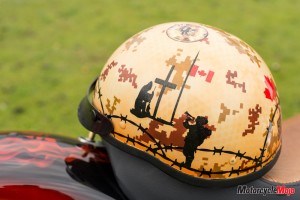 It was after he went to Debbi’s shop to meet her in person that she realized he was retiring from the CAF and that he had served 32 years. She talked to him extensively about his career, and about what he has been through and sacrificed while in the CAF. It was only then that she decided that his bike and paint job should, and needed to, represent the years he served this country, the sacrifices he made, and the sacrifices made by his fallen comrades and his friends.

She called him and asked, “Are you hard set on skulls and flames? If not, will you let me have free rein on the paint theme, as I feel it is important to honour your 32 years in the CAF?”

He told her that he never thought about going in that direction, and after some discussion back and forth, and after she promised to repaint the bike for free if he didn’t like it, he agreed. “Wow, this is huge, but okay, let’s go for it,” he said. “I have faith in you and trust you.”

After many drawings and ideas later, she began the process of painting his bike in a way to honour his career and pay respect to his fallen comrades. Many hours went into his paint job – the details, the theme and all the colours. It took a lot longer than she expected. “It was an emotional paint job that brought back many of my own painful military memories,” she says.

Ultimately, she came up with a design that completely blew him away. It was clearly something that Bill did not expect, even though she frequently sent him little teasers without giving away the paint scheme.

On the day of the bike reveal, Debbi was nervous that he might not like it. Bill wanted to share the moment with his two sons, so instead of just showing him the bike, Debbi decided that she wanted to “present” it to him, in a way that honoured the moment and him. His boys were just as excited as he was to finally see the bike.

Debbi had hung up the Canadian flag along with some brown CADPAT (Canadian Disruptive Pattern) camouflage netting to represent his tours. The bike was completely covered, so when the main doors opened, he couldn’t see the paint yet. Only when his sons took off the green CADPAT cover did he see his bike. He stepped back, putting his hands to his face, turned around, and cried.

“The feelings I had when I first saw the bike were all over the map, and it was a lot to take in because it just brought up a lot of emotion,” Bill says. “Not only from my 32-year career, but from all the tours of duty and the friends I’ve lost, as well as the friends that I have made over the years. It was just like everything at once and a bit overwhelming, to say the least.”

They both became emotional. “Bill, because he was overwhelmed that I had honoured him, and his service, with the paint theme,” Debbi says, continuing, “Me, because I was so happy he loved it. But also, because this paint theme is bigger than us. It represents every single person who is serving or has served in the CAF, and our fallen.”

When I talk to Bill about his bike, he says that he doesn’t think there is one part that speaks out more than the rest, as it is all just one huge display of dedication. Between his ideas and what Debbi came up with, there is a lot of heart and soul put into this bike and the entire build. “If I had to pick one thing that stands out for me the most, though, it’s on the tip of the fender,” Bill says. “It kind of demonstrates the shadows of our fallen soldiers lined in hand-painted poppies.”

When I ask Debbi to explain what each part of the paint scheme represents, she tells me, “I’m not going to lie, I shed a tear when painting the fallen tribute on his rear fender. The poppies are very important, as they not only represent our fallen, but also his nine medals. The wire represents the fact that when he was deployed, he went (outside the wire) into the shit. Inside the wire is base compound, more of a safer, protected place. When soldiers leave the compound, they go and become more at risk of encountering the enemy, the risk of death. Everything in the paint job represents a part of Bill’s military career and deployments.”
The medals that Bill wears tell only part of his story, but now his bike communicates much more. And that is what Debbi wanted to honour. “I wanted to show him, to give him, the honour he deserves. I did this in my paint theme for him, which we will never forget. He had no idea I was painting his helmet either, so when I gave him that, he cried even more.”

She next presented him with the Tango Yankee coin, which means “thank you.” It says on the coin: “Everything you do in this life matters, you matter.”
She says that every soldier and veteran needs to be honoured, and she is very right.