Embarking on an adventure ride in early spring in the interior of British Columbia is somewhat of a gamble. Depending on the weather conditions, it’s that time of year when all that layered white stuff, nicely locked up in the mountains, either travels down to the lowlands in leisurely increments or unrestrained swiftness. Nevertheless, after being cooped up all winter and the bike scratching at the garage door, I decided that a short loop trip, spanning a couple of days, would be worth the wager.

I had an enduring desire to ride a historic wagon route turned secondary (to call it that is a bit of a stretch, so let’s say tertiary) road that paralleled Highway 1, just south of Ashcroft and emptied out near the confluence of the Nicola and Thompson Rivers at Spences Bridge. The road goes by a few names – most notably the Kirkland Ranch Road, as approached from the north; or Drinkwater Road, if tackled from the Spences Bridge side. There is a lot of mystique surrounding the road, originally built to serve several small First Nations communities that at one time were flourishing,
with names like Spatsum, Toketic and Pemynoos. Although normally travelling solo, I asked my riding buddy Jon, a seasoned adventure rider who originally hails from England, to join me.

Too Good to Be True 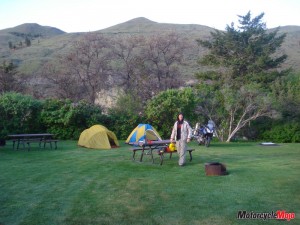 So, we headed out at “eight thirty for nine,” as Jon likes to call it, on an unusually warm and clear Friday morning from our hometown of Penticton, where the clouds to the west were low on the horizon and the snow appeared to be well seated on the nearby peaks. However, we were following on the heels of several days of torrential rains and the reports were just beginning to roll in about localized flooding.

The first slamming indication that we may encounter some wet spots on the journey hit hard when we had just finished the short highway leg to Keremeos – those low clouds we glimpsed in Penticton now amassed an approaching dark grey Mordor-like wall – the distance between obviously being truncated by the minute as we travelled at a steady 90 km/h along Highway 3. Just outside the mining-era town of Hedley, the clouds unloaded their watery fury on us, so we took refuge under the awning at the local post office for about 20 minutes. Then it was all clear and peaceful again.

Blue sky and a warm sun greeted (and dried) us as we embarked down Old Hedley Road, stopping at some iconic pictographs along the way. I did, however, note on my periphery, as we rumbled over broken pavement and cattle guards, that the little streams feeding the river at right angles were a surging deep chocolate brown – was that just a localized event, or a hint of something else brewing high in the mountains? 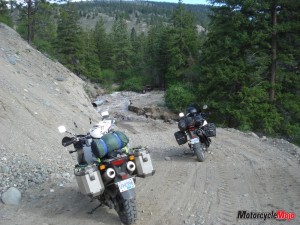 We motored up the Aspen Grove highway north of Princeton and stopped for some bannock at the Kekuli Cafe in Merritt. In the parking lot, two local sheriffs told us that they heard the road along the Nicola River might be closed due to flooding. Unfortunate, given I had planned to take in the curves on that stretch to take us to Spences Bridge and then embark on the Kirkland Ranch Road from the south. Thinking that perhaps they were wrong, we headed toward the Nicola junction, and all seemed fine until the massive barricades and less-than-charming flag lady stood in our way.

I asked her nicely what routes may be open to get us over to Ashcroft. With a scowling look, she suggested we had a 10 per cent probability of making it over the Highland Valley Copper Road, but local flooding there was consuming parts of the highway, as the crackling on her radio indicated. This turned out to be true. Fortunately we squeezed through, admiring the small falls created by a sinkhole that swallowed a lamp post at the Logan Lake junction.

As we descended in the Thompson River valley, I had an epiphany that we could still try the Kirkland Ranch Road, attacking it from the north end. It was still mid-afternoon, and I calculated that it would only take us a couple of hours to pick our way along to Spences Bridge.

The first sections of the gravel road were well travelled, meandering its way through small ranches, cattle country and sagebrush landscape. Off to the west, I could see the deeply incised Black Canyon, where the river makes a near U-turn, slicing through several million years of metamorphic rock. Descending further through a series of switchbacks, the road levelled off on a bench that appeared to be the contour that would take us southward.

As we left the last of the scattered residences, the road became more rutted and strewn with boulders coming off steep scree slopes. In places, deep sand made for fun, albeit tense, moments as we struggled to keep our bikes vertical. Feeling confident that we had negotiated the worst sections and with Spences Bridge in our sights, some 4 km away, we pushed onward. I was elated to see that crews had recently replaced a major creek crossing, a tributary now swollen with snowmelt, with a robust concrete bridge – a hopeful indication that we would be carried across a few more surging creeks to our destination. 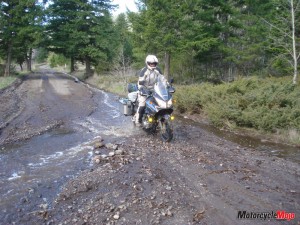 Feeling quite giddy in my helmet that we had nearly accomplished riding one of my bucket-list routes, we rounded a corner and were greeted by a chasm where once stood a bridge. In its place was a brown, bubbling torrent, with rocks the size of footballs, cascading down toward the Thompson River. It took us several minutes to register the carnage laid out before us. A short foot reconnaissance down the splintering road surface revealed a ledge on our side, about two metres down to fast-flowing water. There was no way we were crossing – not unless we had a crane or Bailey bridge in our panniers.

The painful realization sunk in – we had to turn around. For me, the thought of having to negotiate the more dicey sections of road again, much more fatigued and with the sun about to creep behind the mountains to the west, was rather soul crushing. Jon had already started to make the effort to turn his bike around on the hellish angled slope leading to the former bridge crossing, deep sand making it even more of a challenging manoeuvre. I followed suit and we just made the best of an unfortunate situation, taking it one kilometre at a time back the way we came, with surprisingly no bike drops.

At one point on the return, we came across two locals in a pickup truck heading in our direction, meeting side by side on a narrow portion of the road. I greeted them with a wave; they slowed and the driver said, “I guess you got as far as the bridge, right?” I sheepishly nodded. He was impressed that I had gotten that far, especially on my “road tires,” as he called them. Jon’s bike was equipped with Heidenaus, so I guess my Bridgestone Adventure A40s didn’t qualify for the off-road category. When the Levee Breaks Pressing on, we rode into the town of Cache Creek, but upon arrival, we were met with a community in chaos. The Bonaparte River and Cache Creek, having breached their banks, were now conjoined twins, flowing turbulently down the main street.

We watched as emergency vehicles flew up and down the highway, police and firefighters shouting orders from traffic islands that became true islands in the liquid carnage. Our bikes took a bath as we navigated our way from a local gas station to a food market across what was now the new course of the Bonaparte. Earlier at home, I had made a mental waypoint of a campsite just outside of town (aptly named Brookside), but when we arrived, the access bridge crossing Cache Creek was completely gone. The campsite was under a metre of murky water with severed tree appendages surfing their way downstream, bouncing off marker posts along the way. Later we learned that the local fire chief had come to this very spot earlier in the afternoon, only to be swept away. His body was recovered two weeks later.

The quest to find a place to stake down our tents that night was stymied at every turn, as every route we wanted to take into the high country was met with barricades (where they had time to erect them) and impassable crossings. One route seemed hopeful, the Deadman Creek Road, but after about 20 km ascending the plateau, we were greeted by a small river that replaced the road surface. A landowner had come out to where we were stopped while we contemplated our next move. We learned that his house had to be abandoned, as it had shifted on its foundation and it had one metre of water in the basement. I guess we were the lucky ones.

Descending to the valley once more, we opted to camp at Juniper Beach Park, situated on the Thompson River. Unfortunately, the sounds of screeching train brakes that occurred at regular intervals during the night were reminiscent of wailing banshees, so we didn’t have the most restful of sleeps. Our journey home the next day was like watching an episode of Extreme Weather. Residents of several communities we drove through were struggling to save their homes while keeping bloated creeks and rivers from consuming their livelihoods. For Jon and I, astride our V-Stroms, we were pretty much spectators to most of the carnage, but we agreed our adventure ride was truly just one bridge too far.