Triumph’s third-generation Tiger 800 has over 200 upgrades, making this the most competent feline in a bloodline that spans more than 80 years

By now you’ve noticed that adventure bikes are getting increasingly popular. They attract new riders wooed by the thrill of exploring new, often-unpaved roads, and by experienced riders stepping off sport bikes and onto more comfortable, more capable machines. BMW pretty much invented the genre in the early 1980s with the R80 G/S; however, many other bike makers followed suit, producing their own variations of these do-all machines. You can find them with engines displacing from 300 cc to almost 1,300 cc, and utilizing engine configurations from singles to inline-fours.
The Triumph Tiger 800 falls just about in the middle of the category. Triumph first introduced the Tiger name in the mid-1930s for a series of bikes competing in the International Six Day Trials. The modern Tiger that is powered by an inline-triple was introduced in 1993. The current-generation Tiger, which is powered by an 800 cc liquid-cooled triple, was introduced in 2010, then refreshed in 2014; for 2018, it gets what Triumph calls a “major evolution,” with changes to the engine, chassis and suspension, as well as a big influx of new technology. We were invited to Marrakesh, Morocco, to ride the rebooted Tiger 800 line, which includes the road-oriented XR, starting at $13,500, and the off-road-ready XC, which starts at $16,750. 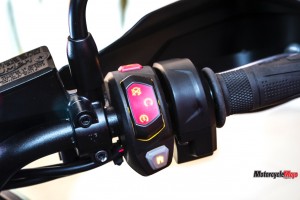 Visually, the biggest difference between the XR and the XC is the choice of wheels: the former rolls on cast-aluminum wheels, with a 19-incher at the front; while, due to its penchant for off-road exploration, the XC rolls on aluminum-rimmed spoke wheels, with a 21-incher up front. Both bikes use 17-inch rear wheels. Suspension components differ on the machines, with Showa providing the suspension on the XR, and higher-spec WP units for the XC. Forks are inverted 43 mm units across the board, which are non-adjustable on the low- to mid-level trim XRs, and adjustable for compression and rebound damping on the top-level XRT. The single shock is adjustable only for preload, via a remote knob. The XC features adjustable compression and rebound damping up front, and rebound damping and preload in the rear. To better cope with jumps, ruts and rocks, the XC has 220 and 215 mm of wheel travel front and rear, which are respectively 40 and 45 mm more than the XR’s. This also bumps the two-position adjustable seat height to 840-860 mm on the XC from the XR’s 810-830 mm.
There are several spec levels to choose from in both Tiger variations, each one with an increasing level of electronics and standard features – Canadian riders will be pleased that heated grips are standard on most models, as are five-volt USB ports and 12-volt power sockets for heated clothing, which I had fortunately brought, since the forecast called for very un-Morocco-like sub-freezing temperatures and the possibility of some snow. Traction control and ABS are also standard. There’s even the XRX LRH (that’s a lot of letters), which is a lowered version (“LRH” standing for Low Ride Height) of the XR, featuring a seat height of 760-780 mm.

A Tiger for the Road 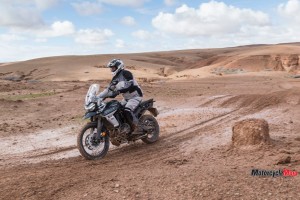 We began the two-day launch on the road, aboard a Tiger XRT, which comes standard with a five-inch, configurable TFT colour screen, five ride modes, cruise control and a heated seat. The Tiger’s 94-horsepower engine has been retuned to produce a very broad spread of torque. Although the engine hits its peak torque of 58 ft-lb at just a touch above 8,000 rpm, the torque never dips below 50 ft-lb at anything above 2,500 rpm. The biggest change within the engine is in the gearbox, which now has a lower-ratio first gear that improves low-speed rideability, especially beneficial on the XC when used to negotiate tighter off-road sections or climbing steep hills.
The XRT’s five ride modes are Rain, Road, Sport, Off Road and Rider. Each one has preset parameters for throttle mapping, traction control and ABS settings, except Rider mode, which is configurable. The engine is smooth, and throttle response is excellent regardless of which ride mode is selected. The engine pulls in a linear manner up the rev range, with its wide powerband, giving it deceivingly smooth acceleration that actually translates into a lot of speed if you let the tachometer needle creep toward the indicated 10,500 rpm redline. 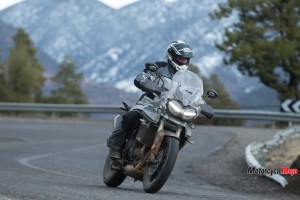 Triumph has improved the riding position, moving the handlebar rearward by 10 mm and installing a seat with improved foam density for better comfort. It proves comfy for the day-long ride, especially when it was emitting toasty heat. The handlebar is high enough to easily accommodate a six-foot-tall rider when standing on the foot pegs while riding off-road. The windscreen on mid- and top-trim Tigers is adjustable manually to five positions, and it’s easily done with one hand while riding. Newly added aero deflectors combine with the windscreen to offer excellent wind protection for your chest and shoulders, while producing minimal buffeting.
The TFT screen is configurable with many display options, and it displays all the basics, as well as ride mode info, temperature, time, gear position and fuel consumption, among other things. The display also changes with the ride modes, though you can select and set as default any of the available displays regardless of which mode is selected.
On the road, the XR exhibits light, neutral steering, and handles everything from long sweepers to tight switchbacks like a sport bike. You can charge into turns modestly hard on the brakes without experiencing excessive nosedive. Its suspension is on the firm side of the adventure bike spectrum, especially noticeable when we turned onto a bumpy, broken stretch of asphalt and it bumped me off the seat over bigger bumps. Although the road was fun, I was really looking forward to the following day’s off-road ride. For this we switched to the top-level XCA, which was equipped with the newly approved, and optional, Pirelli Scorpion Rally tires.

A Tiger for Off-Road

The day’s surface varied from pavement to hardpack dirt to sand. Because of the wet ground, the hardpack dirt was slippery; the sand, which was weighed down with water, offered very good traction; and the pavement varied between slick and grippy. The aggressively treaded Pirellis give the bike a ready-for-business appearance, and they proved very capable over the majority of different surfaces, only revealing their limits on slippery wet clay. Its softer suspension is better suited for rough terrain, and the bike can manage an impressively quick pace, steering precisely and riding over relatively big bumps without bottoming. On the road, it gives up little in the way of handling to the XR, with slightly slower steering being the biggest difference, and this likely due to the knobby tires.
Riding over the different surfaces, however, revealed my biggest gripe with what is otherwise an excellent machine: The ride-mode selection process – it just requires too many steps. You have to push one button on the left-hand switch assembly to scroll through the XCA’s six ride modes (it also has an Off Road Pro mode that switches off TC and ABS), use another button to select the mode, and then confirm your selection by closing the throttle and pulling in the clutch lever. Also, the off-road modes can only be selected while stopped, so if the terrain changes constantly from pavement to dirt and back again, you have to stop every time you want to switch between road and off-road modes. On the other hand, all road modes can be selectable while riding.

Although not a deal-breaker, this was bothersome when I didn’t have time to stop and switch modes, and got into some steep, sandy climbs, which were hindered when the traction control kicked in and killed my momentum. You also have to remember to switch back to the off-road modes every time you shut the ignition, since the bike defaults to road mode when it’s turned on again.

BMW circumvents this by allowing owners the option of installing a dongle under the seat to activate the more advanced off-road modes, and retains them when the bike is turned off. This way, an owner can’t take legal action against the company by claiming the bike’s safety systems were inadvertently deactivated – one must physically modify the electronics before the ABS and TC settings can be turned off and retained.

The 2018 Tiger 800 has been improved in almost every way. About the only area it could use a little help is with the ride-mode selection, but as I stated, this is not a deal-breaker. I can’t see the need for the base XR model, which is priced a little less than BMW’s new $14,550 F850GS, and Honda’s $15,099 Africa Twin (2017). It has very few of the features I found appealing on the mid- and top-trim models. Despite this, with all of the models you can choose from, there’s certainly a Tiger 800 that will suit your adventure-bike needs.