Despite living 10 minutes from the U.S. border, I had never explored northern New York State, and only very little of Vermont. It was high time. Leaving Niagara, Ont., I was surprised at the beauty I had been missing. Pretty little towns adorned Highway 104, which I followed all the way across the southern shore of Lake Ontario, watching as it became neat farmland and new vineyards. East of Watertown, New York, was all beaver ponds and meadows (the remnants of beaver ponds), and beyond Harrisville, the increasing undulations and twisting roads began.
By Lake Placid, I was full out in the Adirondack Mountains. The town itself was unassuming, but the formidable ski jumps and the Olympic Training Center were reminders of 1980, when the world came to Lake Placid. Bicyclists tested their mettle on the steep roadways, as did a group of young men in an Ironman competition. The winding road clung to the slopes beside Upper Cascade Lake. The lake itself was once rumoured to be bottomless – a belief probably fostered by local guides trying to drum up business. In fact, the lake is surprisingly shallow.

A Different Kind of Riding 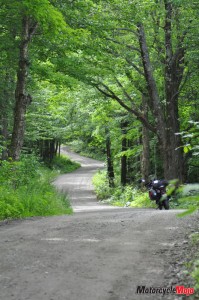 From here I followed Hwy 9N to the western shore of Lake Champlain, where I took the ferry from Essex across to Charlotte, Vermont. On board, a retired couple noticed me struggling to take a selfie and asked if I’d like help. They wore bicycling gear and had expensive mounts. They were returning from a day of riding in New York.
“We love it on that side of the lake,” the woman said. “The roads are so quiet and the scenery is beautiful. Perfect, really.”
“How far did you ride today?” I asked.
“Today, just fifty miles,” she replied. “Usually it’s seventy, but my husband’s rear wheel is acting up.” I learned that she had been an athletic coach at the University of Vermont in Burlington and now leads luxury bicycle tours in places like Arizona and Oregon, and even a wine tour in my own Niagara Region.
Having chatted the entire 30-minute trip, we bade one another farewell. Dusk was falling, and when I couldn’t quickly find a place to wild camp, I rode to Smugglers’ Notch State Park, my planned starting point for tomorrow’s ride. The campground was full, according to the park ranger, but I could try Little River State Park not far away. So I rode there, hopeful. At the gate, I was met with a “No vacancy” sign, but in the failing light I was not above begging for a tiny square just about anywhere. To my delight, a family had just left their site a day early and their spot was now available. 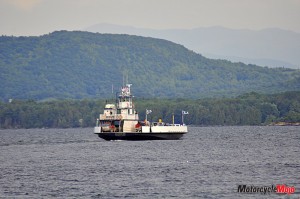 I learned this was not the only site that had been abandoned. Indeed, an entire farming community remained abandoned within the park, complete with stonewalls, cellar holes, a cemetery and the remains of a sawmill. Established in 1816, the community thrived as the railroad came through. But a disastrous flood in 1934 forced residents onto their roofs, and 50 people drowned. This spurred the construction of Waterbury Dam – an appropriate name, I thought, as some of the now deserted community was submerged. There were also lots of artifacts to be found among the leaves, such as glass bottles and farming tools. And there is a tradition among hikers of arraying the items along the tops of cellar holes or propping them up against trees near the trail for the benefit of others to come.
As I settled in for the night, I discovered that somehow I’d left behind several bungees for my lean-to setup, and I discovered (too late) as well that the batteries were dead in my headlamp. I prayed for a dry night and no need for light – I could buy these items tomorrow. There were signs throughout the park warning of an active bear in the campground, and once or twice in the night I was certain I heard it. I was grateful to realize it was a snoring neighbour, and grateful, too, that his growling might scare off the bear. Fortunately, I had not forgotten my earplugs. 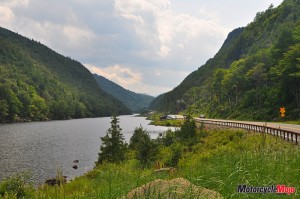 As a rider of a Suzuki V-Strom DL650, I’m a member of an online forum called Stromtroopers (I’m just nerdy enough to love the name), and I had discovered a thread by some riders native to Vermont. They were planning a ride that would not only cover much of the state, but would include some gravel roads, mostly in good condition. Even though I could not join them, they were gracious enough to share their GPS files with me. So, in the morning, I set out at the start of the route in the ski town of Stowe. Elmore Mountain Road began as hardpack gravel, but soon became loose with some erosion. It was the perfect level for me – just challenging enough to practise my fledgling off-road skills; just easy enough to build my confidence. Elmore led to Stagecoach Road, which led to Waltons Road, each as rustic and nostalgic as they sound.

The route became a tar-and-chip surface from Montgomery to East Franklin (a mere kilometre from the Quebec border) to Alburgh, where it followed scenic Hwy 2 the length of Grand Isle in the middle of Lake Champlain. The mountainous landscape of the morning gave way to the pastoral, with fields of hay and corn, and dairy cows browsing in flat meadows. Back on the lake’s eastern shore at Sand Bar State Park, I rode a serpentine highway through Milton, Cambridge, Johnson and Morristown before arriving again at Smugglers’ Notch State Park. This time I got a site and set up camp before inquiring at the park office if there was anything important to know before tackling the famous Smugglers’ Notch road.

The route is a narrow pass (truly a “notch”) through the Green Mountains. Lined with cliffs more than 300 metres high, the road twists tightly to its apex, where it is reduced to one lane. The ranger explained that in earlier times, it was a mere trail. In 1807, President Thomas Jefferson had ceased all trade with Great Britain and Canada, creating real hardship for northern Vermonters, as Montreal was much closer than other U.S. markets. Locals began to smuggle cattle and goods through the Notch. Later, fugitive slaves used the Notch as an escape route to Canada. And during Prohibition, liquor was smuggled over the improved road built in 1922 – improved but not perfected, as the road still must be closed in winter. “One more thing,” the ranger added. “When you get to Jeffersonville, turn right on 15 and stop at a little shack called the Burger Barn.

It doesn’t look like much, but people come from all over to go there. They have 36 of the best specialty burgers you’ll ever eat.” The route was necessarily slow with many switchbacks near the pass, and I stopped at the tightest to watch the many motorcycles riding with me. As I took a few photos, two young riders stopped and introduced themselves. Keating was a long-time rider, but this was Walter’s first season. He was so excited I had taken his picture that he asked me to email it to him. “Thank you,” he said three times while shaking my hand vigorously. I did stop at the Burger Barn. And the ranger was not wrong. As a bit of a burger lover, I can say this place is one of the best. In fact, I will say unequivocally that there are many “bests” here. It didn’t take me long to conclude that northern New York and Vermont are a rider’s paradise. Vermont has the second-lowest population of any U.S. state (only Wyoming is lower), so roads are lightly travelled.

Even on a Sunday they were relatively quiet, and while the bike-to-cage ratio was not quite 1:1, it sure felt like it. By Lake Placid, I had already stopped counting the number of bikes, and their numbers only increased in Vermont.

Taking a Day Off

If the ranger’s information had been pleasingly helpful, the weather forecaster’s was disappointingly correct. I woke up to the anticipated rain and was glad to have opted for the luxury of a wooden lean-to, really more like a cabin with three walls. I could lie in my bivy and just watch the rain – which I did, I’ll admit, for a good part of the morning. I didn’t relish a day of exploring in a downpour, and it was pleasant to have a day to do nothing.

I made lunch and hiked a little, but that was it. It was good to just be Zen for a day. The rain stopped just before dawn the next morning, and I rode through the remaining mist to find a place near Montpelier where I could get a hot breakfast. I loosely followed some more of the Stromtroopers’ route, this time south through tiny towns like Ricker Mills and West Fairlee, along a wooded route, rising and falling rapidly.

At Thetford Center, I turned west and, nearing Sharon, passed a shrine to the birthplace of Joseph Smith, the original leader of the Mormons. Then I headed up Bethel Mountain Road, a paved but narrow, rough route between Mount Lympus and Mount Rochester to even higher elevations in the Green Mountains National Forest. At Brandon, I caught Hwy 7 to Rutland, where I stopped for lunch before turning again east toward Killington, a ski resort town on scenic Hwy 100 south, through mountains and past small lakes and rushing streams.

With my ride nearing its end, I was delighted to discover a crescendo in Hwys 103 and 140 west between Ludlow and Wallingford. Perfect pavement and well-cambered tight corners, up and down through the National Forest. It was itself a recap of all I had seen and experienced. I breathed in deep the fresh mountain air, glad to be alive and grateful for the chance to experience this pristine region. The magic of New York and Vermont most definitely had me in an Upstate.