There is a changing tide in the North American cruiser scene.

Trends have a way of coming and going with the passing of time. This is mostly true of fashion, but it also applies to other categories, including motorcycles. Cruisers, for instance – particularly those that borrow styling cues from American bikes, like forward controls, buckhorn handlebars and skirted fenders – have been part of the motorcycling scene for more than three decades. Not that long ago, cruisers accounted for the biggest share of motorcycle sales in North America, but if you peruse any of the Japanese manufacturers’ websites today, you’ll see a dwindling selection of these low-slung low riders, and the ones you do find haven’t been updated in several years. Honda had more than a dozen cruiser models to choose from about a decade ago; today, the company has no current model-year cruisers in its lineup, aside from the new Rebel, which is unconventional by cruiser standards. This indicates that the cruiser trend is on the way out.

However, not all is lost if you prefer feet-forward freeway frolicking. Over the last few years, we’ve seen a new crop of cruisers spring up that are lighter, more capable, more powerful and more stylish than their counterparts of yesteryear. Many come from companies you’d never expect would produce a cruiser: Ducati has the Diavel; Moto Guzzi has the MGX-21. Even Japanese manufacturers are changing their tune, with some of their modern cruisers taking no visual cues from American-made V-twins, like the Kawasaki Vulcan S or the aforementioned Honda Rebel.

Triumph’s Take on the Cruiser 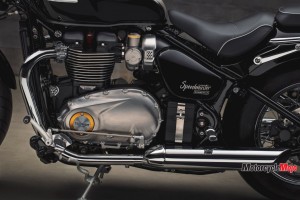 Triumph makes the Rocket III, which is a monster of a cruiser with a 2,300 cc triple that the company rightfully claims is “the world’s biggest production motorcycle engine.” But it’s a big, cumbersome machine that’s more in line with cruisers of past, at least in terms of handling and, to some extent, styling. You can find another, more contemporary cruiser in Triumph’s lineup (though the company insists on calling it a custom), and it doesn’t borrow from American motorcycle design for inspiration. Rather, Triumph tapped into its own history for styling cues, as well as from the custom culture of the 1950s. The result is the stunningly stylish Bonneville Bobber. However, despite its appealing lines, you can’t ride two up on the Bobber, nor can you carry a passenger on its more sinister-looking sibling, the Bobber Black; they’re both equipped with solo saddles with no provision for adding passenger footrests. And if you like to polish chrome when you’re not riding, well, there is none to speak of on either of those bobbers.

That’s where the 2018 Speedmaster comes in. It’s a more lavishly finished British custom based on the Bobber platform. It gets the Bobber Black’s 16-inch front wheel (19-inch on the Bobber) and fat 130/90 front tire, though the Speedmaster’s rims are finished in chrome. It also retains the Bobber’s 41 mm KYB cartridge fork instead of the Black’s burlier 47 mm Showa fork. Other styling touches include chrome and brushed-aluminum highlights, and the Speedmaster is available in two-tone paint for $500 above its $14,950 starting price.

The Speedmaster also has a larger 12-litre gas tank, as opposed to the paltry nine litres for the Bobbers. Other markets get a headlight with a bright LED daytime running lamp, but due to Transport Canada’s reluctance to homologate practical new technologies, we don’t get it here – the LED bits are there, but the main headlight must stay on. The front brake uses the twin-disc setup from the Black, with Brembo twin-piston calipers, as opposed to the single-disc Nissin setup on the Bobber.

Two Up or Solo 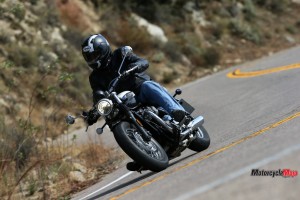 Aside from the additional chrome trim and available two-tone paint, the Speedmaster’s biggest change is the inclusion of a pillion seat. To accommodate the added weight of a passenger, the shock now has a dual-rate spring that is preload-adjustable via an easily accessible lever. If, however, you prefer the styling of the Speedmaster to either of the Bobbers but insist on riding alone, the passenger seat, grab rail and passenger foot pegs are all removable for that solo look.

A wide handlebar pulls back for an upright riding position, and the foot pegs are forward-mounted. The seat height is 705 mm, which is 15 mm taller than on the Bobbers, but it’s still an easy reach to the ground. The rider’s seat can’t be adjusted fore and aft as on the Bobbers – there had to be some trade-off to accommodate the passenger seating. The forward-mounted pegs are not my preferred setup, and the riding position they impose contributed to a slightly sore backside after about an hour in the saddle. The mid-mounted foot pegs of the Bobber are a direct retrofit (at a cost, of course) for those who don’t want to ride with their feet forward. 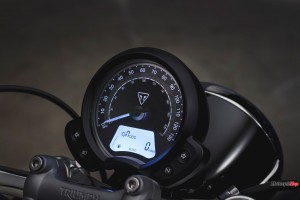 As with the two bobbers, a 1,200 cc high-torque, liquid-cooled parallel-twin with a 270-degree firing order powers the Speedmaster, and it is identically tuned for a fat mid-range. It produces 76 hp with a broad spread of torque that peaks at 78 ft-lb. The engine emits a rich exhaust note, and the torquey twin lunges the bike forward with force from relatively low revs in the four lower gears, though power flattens out as engine speed reaches its upper limit.

The mechanically assisted clutch is surprisingly light, and a gentle nudge at the shifter finds first gear; shifting “through all six gears is equally light.
Like the Bobber’s, the Speedmaster’s gearing is tall and you have to slip the clutch noticeably to get the bike moving.

Nonetheless, the engine’s torquey character makes stalling a rarity. The gearing is tall enough that back roads were handled mostly in fourth and fifth gears, with sixth only being engaged on the highway at speeds above 110 km/h, where the engine loped along at 2,700 rpm. The broad powerband does make shifting almost redundant on twisty roads.

Although the Speedmaster sports a fat front tire, steering remains light and neutral with very little effort needed to maintain a lean. Despite the added leverage of the wide handlebar, the bike is rock-steady in a straight line. Cornering clearance is a bit better than typical foot-forward cruisers, but not as good as sportier cruisers like the Diavel. The twin-disc setup, which includes ABS, is much stronger with lighter lever effort than the Bobber’s single-disc front brake.

As with its Bobber brethren, the Speedmaster is mostly about the styling, though it has been made more practical with its larger fuel tank and the addition of passenger seating. And like all other Bonneville models, the Speedmaster can be personalized via two available dealer-installed “Inspiration” kits, which include a preselected assembly of accessories. The Highway kit transforms the Speedmaster into a light tourer and includes an adjustable windshield, waxed cotton and leather saddlebags, a touring seat, a passenger backrest and an engine guard. The Maverick kit gives it a bit more attitude and includes a brown quilted seat, a flatter, lower handlebar, a black Vance & Hines exhaust system and a grab rail removal kit with rear fender finisher.

Although sales of conventional cruisers seem to be on the decline, I think there’s a new cruiser movement on the way, and it will likely break away from the tired old copy of the American “biker’s bike” cliché (not talking about Harleys or Indians here – they’re the originals). The Triumph Speedmaster has elements of those bikes, mainly the foot-forward riding position and low seat, but with a distinct Brit-bike character that should appeal to older riders who grew up riding the originals decades ago, and to younger riders who want to ride modern classics today. “