There’s a reason why the Street Glide is one of the Motor Company’s best sellers.

As I cruised down some backcountry roads in the middle of Croatia, Bryan Adams’ song “Open Road” randomly started playing on the Boom! Box 6.5GT Infotainment System of the 2018 Harley-Davidson Street Glide I was riding. While belting out the familiar lyrics, “Let the engines roar . . . who knows where I’m going . . .” I giggled in my helmet while smiling and nearly tearing up at the irony of the situation I was in.

It’s not often I get an invite to travel to Croatia to test out new metal, and yet here I was on a beast of a machine with no idea where I was going, yet at the same time not really caring. I was free; it was just the wide open road, epic scenery and the familiar rumble of the V-twin engine of my bike and my fellow riders’ bikes who accompanied me on the adventure of a lifetime. There was no missing the torquey feeling of the Milwaukee-Eight 107 engine on that bike, along with a throaty sound that followed through the dual exhaust pipes. 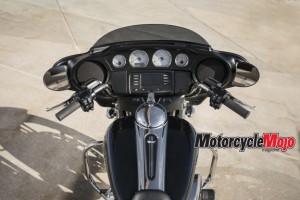 While I’ll admit touring bikes are not my favourite type of motorcycle to ride due to the sheer size and weight of them, I was impressed by the smooth handling and power of the Street Glide. It makes for a solid touring bike thanks to its comfort, and additional features like hand-adjustable rear shock absorbers for increased preload adjustment. I tested out this model in pretty varied terrain, consisting of rolling hills and mountains with sharp switchbacks, twists and turns in addition to straight back roads, busy city streets and, of course, beautiful roads sweeping alongside the Adriatic Sea. The life of a biker sure is a tough one sometimes.

My personal preference is sportier bikes that I can really lean into a corner with, usually with more centred foot controls versus forward controls. Either way, I was still able to navigate this bike through some pretty gnarly turns, and was also able to manoeuvre it fairly easily through a bit of construction and stopped traffic. In Croatia, lane splitting is common, and rather than struggle with the clutch and sit in the 26 C heat, I carefully cruised through lanes of traffic to get to our final destination, Le Méridien Lav, located in the city of Split.

Built for the Masses 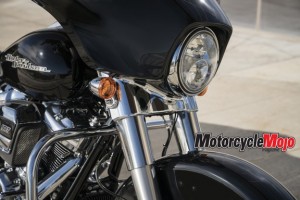 This bike is relatively unchanged for 2018, aside from additional colour options. After major improvements made last year, I suppose the old adage “If it ain’t broke, why fix it?” applies here. This sleek bike features a fork-mounted batwing fairing, hard saddlebags and enforcer cast-aluminum wheels. It’s an all-around attractive, modern machine that commands attention on the road. Check out the 2018 Street Glide Special if you want additional features that include blacked-out engine, forks, handlebars and hand controls, mirrors, tank console, exhaust, air-cleaner cover and more, plus those sexy black front and rear Talon wheels.

The Street Glide is no longer an old man’s bike. Harley-Davidson has worked hard to create a bike that suits a variety of riders, from the younger generation to middle-aged and beyond. For those women who enjoy a solid mid-weight bagger, and enjoy cruising highway or backcountry roads, then this bike is a solid option and worth a test ride to check it out further. 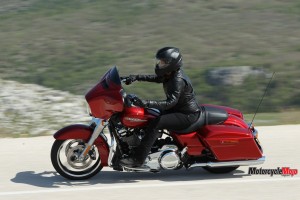 The introduction of the Milwaukee-Eight 107 V-twin in 2017 was a game changer for Harley-Davidson. With 1,746 cc to play with, this four-valves-per-cylinder V-twin engine adds additional torque and faster acceleration compared to its predecessors. It was also designed to reduce the heat being emitted from the engine, so despite wearing all black in hot weather, the engine heat wasn’t causing me to overheat. The increased power was noticeable as we passed slower-moving vehicles on those narrow Croatian roads. Following big tour buses on twisty roads was truly painful, so I was able to accelerate and pass quickly, smoothly and safely. The newer engine was designed to also keep in mind emissions compliancy and fuel efficiency, while being super-reliable and powerful at the same time.
The Street Glide comes with cruise control, which is great for highway riding. I’ve never been a huge cruise-control user on bikes, but it’s handy to have this option for those longer highway road trips. The six-speed transmission’s shifting is smoother than on older models, and while Harley-Davidson boasts seven per cent less clutch-lever effort for all Milwaukee-Eight models, my hand was getting pretty cramped after navigating rush hour traffic at the end of the day. I checked in with my fellow (male) riders, who didn’t experience as much difficulty with the clutch, so whether this was due to being one of my first rides of the season or to me having smaller hands, we may never know. I concluded that I need to (a) work on my hand exercises during those crazy cold Canadian winters, and (b) go on a riding trip mid-winter to get my two-wheeled fix and exercise that clutch hand.

For added comfort and customization, the Street Glide comes with hand-adjustable rear shock absorbers. The adjustment knob is located behind the left rear saddlebag, so this needs to be removed to make the adjustment. The quick-release option for saddlebags makes this a relatively easy adjustment, though.
The front suspension features newer technology to offer linear damping characteristics, meaning that the weight transfer in corners and while riding on varying terrain was consistent and even. The changing terrain on one of the roads we were on could have been tricky to navigate, but the balanced chassis and compliant suspension made it easier to control and ultimately saved my butt when I hit a sharp switchback on a fairly steep incline.

The Showa dual-bending valve technology in the forks and rear emulsion shocks prevent the bike from bottoming out as well, so whether you’re getting on the gas, hitting a big bump or rolling over train tracks, the ride is smooth.

The Street Glide comes with Harley’s own Reflex linked Brembo brakes (ABS optional). In some situations where I had to brake quickly (i.e., those tight corners and switchbacks), the linked braking system came in handy for smoother braking versus abrupt braking, which with a heavier bike could put me in a tricky situation with the uneven weight transfer.

A 300 km ride through the Croatian mountains and countryside is a great way to test out the comfort, ride quality and handling of a bike. I must say, this was one of the most comfortable bikes I’ve ridden. The enhanced suspension, combined with a firm yet plush seat, made for a nice, comfy ride resulting in zero soreness on the posterior. The saddlebags provided more than enough space for extra gear, water and snacks.

The bike weighs 376 kg ready to ride, and the seat sits at 695 mm high, so it’s certainly not the lightest or easiest to manoeuvre, but it’s also not the heaviest. At 5′ 7″ tall, I was able to push the bike around on flatter surfaces, but struggled to turn it around on a road with an incline, or back it into a parking space when it wasn’t flat. I had no problem seeing over the lower-profile windshield. My shoulders were a tad sore the following day from the upright riding stance, but again, I’m also not used to riding in this position. During this press intro, I also rode the new 2018 Road Glide, and while these bikes are quite similar, I found the Street Glide slightly lighter and easier to manoeuvre (especially in traffic) owing to the Street Glide’s fork-mounted fairing, as opposed to the frame-mounted fairing of the Road Glide.

The Street Glide’s hand controls are positioned with easy-to-reach buttons for signalling (I only hit the horn by accident once!), and the joystick for the audio controls was easy to manipulate with gloves on and without taking my eyes off the road. This bike comes with the Boom! Box 6.5GT Infotainment System, which has two 5.25-inch speakers and a large, high-definition 6.5-inch screen. The 6.5GT system sounds pretty good at 25 watts per channel, but I’m a big music buff and would likely switch those speakers out if this were my personal bike, as I found the sound a bit distorted at higher volumes. The larger screen is the mothership, though, and with full HD colour, its large viewing platform makes it easy to see on the road and on bright days. The infotainment system comes with AM/FM radio, weather alert, USB audio device hookups, GPS navigation and Bluetooth pairing for your phone. It comes with automatic volume control to compensate for the increase in noise level, plus hands-free voice recognition, making this a safer system for riders.

Stripped Down and Versatile

First introduced in 2006, the Street Glide remains one of Harley-Davidson’s top-selling bikes for a reason. This bike is quite versatile in that it balances smooth, consistent riding with a sleek, stripped-down design that appeals to riders of all ages, genders and riding styles. Yes, it’s a heavier bike, and yes it’s chock-full of extra features that you may or may not realize you need. If you’re a newer rider, this may not be your bike. But if you’re a confident, seasoned rider, enjoy road trips and checking out new destinations, then this bike is worth a test drive.

In the words of Bryan Adams, I encourage you to “be afraid of nothing . . . and let the white lines on the highway lead you out of town.” Whatever bike you’re on, make sure you find the right one, and just enjoy the ride. At the end of the day, life is an open road, and it’s even better when you’re on two wheels.