Yamaha resurrects an old name but on a brand-new machine for those who like to spend hours on the road in luxury.

The Venture name goes back a long way with Yamaha, first given to a big touring bike when touring bikes were a fairly new thing. The first-generation Venture, a big, cumbersome, angular luxury tourer, was introduced in 1983, and it was equipped with a liquid-cooled V4. It was the first time Yamaha used this engine configuration, predating the similarly powered VMax by two years. The Venture enjoyed a 10-year run before being discontinued, but it appeared again in 1999, all new, but still powered by a V4 engine. That time, however, although still decked out in full touring regalia, it featured very cruiser-ish styling cues. It, too, lasted for a decade before Yamaha put it to bed once again. 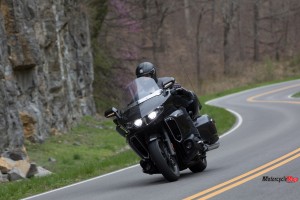 Well, this year, the Venture name has been resurrected yet again, and we were invited to Nashville, Tennessee, to ride the 2018 Star Venture TC, Yamaha’s newest highway hauler. We got a chance to ride it in its most natural setting: along stretches of American interstate, secondary highways, and winding back roads that snaked through rolling hills. The “TC” in its name stands for transcontinental, after all.

Aside from sharing its name with Yamaha’s earlier luxury-touring bikes, this third-generation Venture is an entirely different machine. For one thing, its styling is a complete departure from Ventures past. It still has cruiser-based styling; however, its design combines angles and curves that give it a unique, futuristic silhouette featuring an aggressive-looking face with familiar slanted headlight openings reminiscent of the R1.

More importantly, though, its engine is no longer a liquid-cooled V4, but is instead a big, air-cooled V-twin. The 1,854 cc, 48-degree V-twin is based on the Raider engine, but is all new and big on low-end torque, peaking at an impressive 126 ft-lb at just 2,500 rpm. Although a pushrod V-twin might seem archaic by today’s standards, the pushrod-actuated valve train with the cams inside the crankcase reduces weight in the cylinder heads, which contributes to lowering the bike’s centre of gravity. 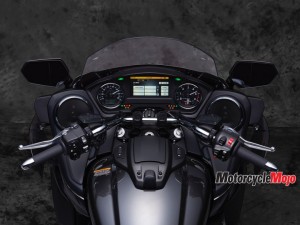 The changes in the engine compared to the Raider engine are numerous. The Venture’s mill has new cams with revised valve timing; it has revised intake ports; the crankshaft has a cam-actuated damper – not found on the Raider – to smooth engine pulses; it has a revised balancer; it has two alternators (one on either side of the crankshaft) for increased electrical output; and it has six speeds as opposed to the Raider’s five speeds. It also has a new crankcase to contain all the new components. The exhaust system has dual catalytic converters and was tuned for sound in conjunction with Yamaha Music.

There’s another new feature integrated into the Venture TC’s engine, and Yamaha took a tip from the Honda Gold Wing’s touring manual: It has a crawling gear that operates in forward and in reverse. Called the Sure-Park system, it incorporates a lever located on the left side of the bike by the rider’s knee that engages the gear, which is operated by a dedicated electric motor. When it’s engaged, you use a pair of buttons on the left handlebar switch assembly to move the bike forward or in reverse at walking speed. Operating the system is easy and is really handy when getting into tight parking spaces. Traction control, cruise control, D-mode ride modes, a tire-pressure monitor and an alarm system are also standard.

Holding everything together is a new double-cradle steel frame that has a detachable aluminum sub-frame. The suspension is fairly basic, utilizing a non-adjustable telescopic fork and a single, linkage-type shock adjustable for spring preload. The preload adjuster is remotely located under the right side cover, and it requires that you insert a tool like a screwdriver into the adjuster to turn it – a rather simple operation.

Comfort over the Long Haul 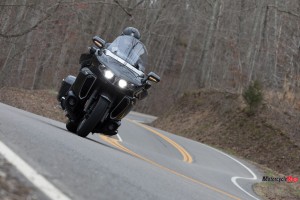 Despite its size, seat height is just 695 mm, so it’s an easy reach to the ground. The riding position is very relaxed; the ergonomics are comfortable, also with an easy reach to a wide, pullback handlebar, and large floorboards that allow you to move your legs around. The rider’s seat bolster is adjustable fore and aft over a 30 mm  range, and the passenger floorboards are height adjustable over a 25 mm range. Seat and grip heat are standard, and the passenger benefits from a heated backrest. The heat, which is adjustable to several levels, came in handy for our unusually chilly early-morning departure. Also handy is the electrically adjustable windscreen, which can be raised 90 mm.

Since the Venture TC is designed for covering long distances in comfort, it’s loaded with features. The first thing I noticed when seated was the elaborate instrument panel. There’s a prominent seven-inch colour touchscreen flanked by analogue gauges, with the speedometer on the left and the tachometer on the right. The screen is used to control the infotainment system, which includes AM/FM radio, Sirius XM satellite radio (with a three-month subscription included), a CB radio and an imbedded GPS navigation system. Bluetooth connectivity enables you to connect your smartphone or a helmet headset, the latter which can also be used to control the infotainment system through voice commands. The passenger, when connected to the bike with a headset, can listen to a separate audio source from the rider, and has access to listening controls, as well as seat-heat control.

Finally, you can also control the infotainment system via the handlebar switchgear. There’s a couple of issues I have with the controls, however. You can only set and adjust the seat and grip heat through screen menus, and the windshield’s buttons are located on the left side of the fuel tank panel, out of easy reach; they’d be easier to access on the handlebar switchgear.

Within the fairing you’ll find some storage compartments: the right one contains a USB connector for electronic device connectivity, and it locks electrically using the key fob. Oh yes, the bike has a key fob, so you don’t have to fumble for a key to start it – just leave the fob in your pocket, push and turn the central ignition switch, and you can then start the bike. The fob also operates the saddlebag and top-case locks remotely. The bike does have a foolproof system to let you ride if you lose or damage the fob, and it gives you a warning in the instrument panel if you ride away without the key fob, should you, say, remove your jacket with the fob in a pocket and leave it behind.

There’s ample storage capacity for rider and passenger, with a total of 144 litres of storage space available in the top case, saddlebags and fairing compartments; two full-face helmets can be stored in the top case.

The engine is remarkably smooth, and while it is very torquey at low revs, it has a low rev limit of 4,500 rpm.

This isn’t really a problem unless you want to make a quick pass in the lower gears, where the engine picks up speed rather quickly and bounces off the limiter abruptly. Pulling power is nonetheless ample when riding solo with no luggage. The bike weighs in at a substantial 437 kg wet, which is more than the Harley-Davidson Road Glide Ultra (425 kg), and considerably more than the new Honda Gold Wing (380 kg) and the BMW K1600GTL (350 kg). Adding a passenger and gear for a weekend jaunt will tax passing power, and it’s here where the Venture will suffer when compared to the Gold Wing or the K1600GTL. Having ridden both those bike, I can attest that they have more pulling power in the upper rev range, especially the latter.

Despite its heft, the bulk of the weight is low in the chassis, which contributes to very light, neutral steering. The chassis is rigid, providing rail-like stability while making turning transitions effortless. Suspension compliance is quite good: firm enough to keep the bike planted through sweepers, while soaking up the majority of bumps without harshness. Mid and lower fairing deflectors are adjustable manually, and they combine with the adjustable windscreen to reduce considerably the effects of bad weather on the rider at highway speeds, especially appreciated during an interstate run in the cold, single-digit morning temperatures. Engine vibration is almost non-existent, but, unfortunately, at speed the bike generates a fair amount of helmet buffeting that disturbs an otherwise smooth ride.

The brakes are essentially supersport-spec: slowing the bike with little effort are a pair of 298 mm discs and four-piston monobloc calipers up front, and a large, 320 mm rear disc mated to a twin-piston caliper in the rear. Linked ABS is standard.

The Yamaha Star Venture TC is the new (big) kid on the block in the luxury-touring category, joining the K1600GTL, the Road Glide Ultra and the Gold Wing in this mileage-eating category. Of course, being a big, fully loaded touring bike, the Venture TC also comes with a big price. It retails for $31,999, which is more than the Harley and the Honda, and right on par with the BMW. However, that price comes with all the standard features mentioned above, as well as a five-year warranty that includes the standard 12-month warranty coverage and four years of Yamaha Protection Plus, which is normally had at a premium. And if you’re going to pile on the mileage, it’s good to know that Yamaha has your back.