Bell-bottoms and disco weren’t the only cool things happening in the ’70s. Steve McQueen was still making movies and café racers were the bike du jour. Star Wars, The Godfather and Jaws regaled the masses, while On Any Sunday pulled the heartstrings of riders, describing so effectively the wonders of riding motorcycles.

One of the coolest, fastest motorcycles to have owned in the ’70s was Kawasaki’s Z1-900, with its beefy in-line, cross-frame, four-cylinder engine that utilized cutting-edge equipment for the time, including a double-overhead camshaft system. The Z1 won 46 speed records, including a 24-hour world speed title, solidifying Kawasaki’s position as a major player in the global motorcycle market.

Sequels and dupes of ’70s classics are numerous today – heck, we even have a doppelgänger Trudeau in office. On Any Sunday made a second go and café racers have enjoyed a comeback, but it’s Kawasaki’s Z1-900 reincarnate, the Z900RS, that’s 2018’s finest flashback.

Just looking at the bike makes you want to smile. It seems picnic-ready, where other bikes in Kawasaki’s Z line look ready to start a fight. But don’t let the RS’s nostalgic charm fool you: this bike is all bobcat out of the bag. Fierce, with a snarling howl and enough bite to rip you from its seat. 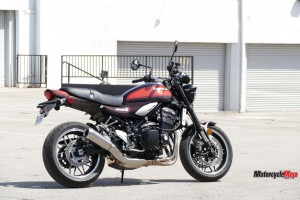 This wildcat’s heart is the 948 cc liquid-cooled, DOHC, 16-valve inline-four found in the Z900, yet it’s been re-engineered with shorter intake and exhaust duration cam profiles and a lowered compression ratio to accentuate low- to mid-range torque. The combination of a 12 per cent increase in flywheel mass and the addition of a secondary balancer, driven off a gear on the sixth web of the crankshaft, work to dramatically dampen vibration.

These changes, combined with overall increases in usability, make for a Z900 that feels more well rounded than any of its family members, so much so that the RS feels more like a standalone model. It’s easy and fun to ride around town in lower gears, with power building steadily in the lower revs until it spools up through a very muscular mid range.

I’ve heard other testers call the RS’s power delivery “twitchy” – too abrupt to inspire confidence during aggressive cornering. I don’t agree. The power is intense at higher rpm, yes, and its ready availability requires a smooth throttle hand, but in no way do I see this punch as a detriment. Perhaps these testers are newer riders or didn’t have enough time to adapt to the bike’s behaviours, because frankly, it’s the surge that comes on above 6,000 rpm that makes the RS so darn fun, especially when you’re charging around town or across mountain roads. 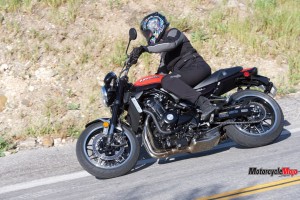 Seeing so much of the engine exposed in such a high-performance motorcycle is always a bit of a thrill, especially in the case of the RS, where the retro vibe is so well infused with its modern componentry: visuals like the beautiful header pipes as they gather into a classic megaphone-style silencer, and how the Kawasaki design team incorporated just enough finning to flatter the modern engine.

Kawasaki says its engineers had never done “sound research” before the RS was in development, which seems surprising considering Kawasaki’s past success in the cruiser market. The RS uses a straight pipe and glass wool packing within the silencer for a seductive and wholly appropriate growl, perfectly matched to this bike’s feisty nature.

Power to the Pavement

The RS shifts tidily using the assist and slipper-clutch design we’ve enjoyed on recent Kawasaki models. First gear is quite short, which makes for some exciting launches. Definitely not a gear you’ll use once above parking-lot speeds, even if the slipper function of the clutch will save you from a wheel-hopping rodeo ride in case of a premature downshift. The bike also utilizes a taller final drive for a more relaxing ride at highway speeds, an attribute I can confirm after many kilometres spent rushing to and fro on California’s high-speed freeways. 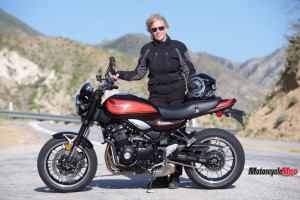 The suspension is less sporty than we’re used to with the Z lineup, and consequently more comfortable for a variety of everyday riding situations. The inverted front fork offers 120 mm of travel and features 10-way adjustable compression damping and preload adjustability, while the rear shock provides 140 mm of travel and infinitely variable preload and rebound adjustability. I spent many of my kilometres on the RS tearing across mountain roads, preferring an increase in rebound dampening for a tighter response.

The RS is very agile in all riding conditions, and feels light, if a bit wide, as soon as you throw a leg over, despite its ride-ready weight of 214 kg. The ergonomic triangle is what we’d expect from a standard with a handlebar that’s wider, higher and closer to the rider than the Z900’s. Foot pegs are lower and slightly more forward. It’s easy to relax in this position, yet you can still get your weight closer to the handlebar for extra leverage during cornering, or simply to fight the windblast on a highway stint.

Looking at the RS’s nostalgic profile, you wouldn’t necessarily know it harbours enhancements like a sophisticated traction control system. The KTRC offers two positions: Mode 1, which allows full power and a bit of wheel slip, and Mode 2, for full-time traction management, decided by individual wheel speeds as well as engine, chassis and rider inputs.

Dual 300 mm discs up front and a single 250 mm rear disc combined with the standard-equipment Nissan ABS work flawlessly, hauling the spirited RS down from speed with ease. The bike’s 17-inch wheels, shod with Dunlop Sportmax GPR-300s, felt sure-footed in all conditions.

While the all-new Z900RS is definitely a solid performer, its most endearing quality has to be its heartwarming curb appeal. The cast wheels do a surprisingly good job harkening back to the original Z1’s spoked design, while the embellished bobbed front fender adds flair. The styling element that’s most on point, however, is the teardrop tank, though an aficionado might complain about its unsightly pinch weld.

The bike’s wide, old-school seat visually balances excellently the curvaceous tank. Although the seat is comfortable enough for short days, with plenty of room for a passenger, my sit bones did ache after three long days in the saddle.

In the cockpit, the dual, black, bullet-shaped tach and speedo pods are stylish and extremely easy to read. An LCD screen bridges the pods, offering all the extraneous info we’re used to seeing on our modern mounts: gear position, fuel gauge, current and average fuel consumption, coolant and external temps, time, even an indicator to let you know you’re riding in an economic fashion, which is far from the riding style this bike incites.
Note to a new owner: The surface of the LCD panel appears easy to scratch. We received our unit with what looked to be abrasion marks from wiping, perhaps with too rough a cloth or a gas station towel.

The RS SE is available in the sharp, sparkling Candytone Brown/Candytone Orange (tested here) for $13,199, or in Metallic Spark Black for $200 less. If you really want to cause a stir, opt for the Z900RS Cafe edition, with the super-classic bikini fairing in Vintage Lime Green for $13,599. The RS pricing might feel high in relation to its closest sibling, the Z900 ABS, which goes for $9,799, but if the enhanced engine, well-executed bodywork and excellent fit-and-finish doesn’t justify the surcharge, the incomparable feeling you get riding the RS just might.

While the ’60s and ’80s tend to get most of the warm-fuzzy recollections, the ’70s saw the beginning of many great things: Stephen Hawking brought to light the mystery of black holes, Apple built and sold its first computer and Atari let us play Pong.

In the world of motorcycles, the landscape would be forever changed as Japan made an indelible impact with its sophisticated, large-displacement engines powering race-ready rockets like the Z1-900.

The world in general is so much more complicated today, with so much commotion and constant overload that perhaps we’re more willing than ever to appreciate a motorcycle that celebrates simpler times.