After a decade of keeping the performance bar set high, BMW ensures this third-generation S1000RR remains a favourite supersport machine.

When BMW introduced the S1000RR in 2009, it raised the supersport performance bar considerably despite being the German motorcycle maker’s first attempt at a high-performance superbike. It was BMW’s first motorcycle with a transversely mounted inline-four, and the bike entered a class dominated by machines from Japan. Despite being entirely new, it entered the category with class-leading power, claiming 193 hp, when the best of its competitors from Japan were topping out at about 180. But, the S1000RR also brought a slew of technology changes into the category; it was the open-class supersport machine to feature advanced traction control and ABS as standard features in Canada, and did so at a very competitive price.

BMW’s S1000RR enters its third generation later this year as a 2020 model, boasting the biggest changes since its introduction a decade ago. BMW held its international press launch at Circuito do Estoril in Portugal. 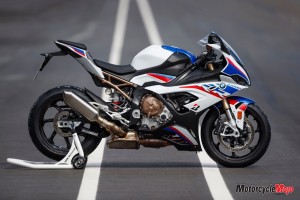 The first thing you notice when looking at the new S1000RR is that it no longer sports those polarizing asymmetrical headlights. They were hallmarks of the German-made supersport machine since its introduction, although they weren’t unanimously appreciated; some people liked them, some people didn’t. There’s no denying that the new symmetrical headlights have given the S1000RR an entirely new look. While I found that the former oddly shaped headlights gave previous incarnations of the bike a distinctive look that set it apart from the masses, I like this new design.

From the saddle you’ll see a new high-resolution TFT instrument panel, controllable via handlebar-mounted switches and multi-function thumb wheel. There are several display options and seemingly endless parameters you can adjust via the screen – many more than I had the chance to sample during a day of track riding. The interface is relatively user-friendly, although I would have needed more seat time to get accustomed to accessing all of the functions available via the new screen.

The S1000RR now features advanced six-axis sensors, which provide much more intuitive and precise traction and wheelie control than before. There are four ride modes – Rain, Road, Dynamic and Race – although real tuning is available in the optional Pro modes. With Pro modes, you get three sub-modes – Race Pro 1, 2 and 3 – each allowing you to select from three levels of each parameter – including throttle response, traction control, wheelie control, engine braking and ABS – and save them to the mode’s memory. You therefore can have three customized maps to select from when riding on the track, although they must be selected before you ride, by using the menu in the TFT screen. There is a button on the left handlebar switch assembly that does allow you to tune the level of ABS and traction control further, on the fly, within the parameters you’ve already selected in Race Pro mode. 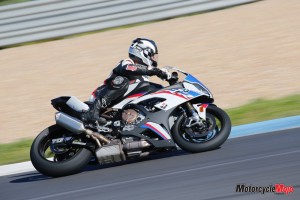 Weight has been taken off everything – the engine, chassis, exhaust, electronics – for a total of 11 kg, dropping the weight to 197 kg wet for the S1000RR; when equipped with the optional M package, which we’ll get to later, the weight now is 193.5 kg.

The 999 cc inline-four is entirely new, and like the new R1250 boxer engine, it incorporates BMW’s ShiftCam technology. This system provides variable lift and duration at the intake valves, much as if the engine had two different intake cams. There’s a set of electronically controlled cam lobes that boost low-end torque and another that enhances top end. The high-power lobes always work above 9,000 rpm, while engine load determines which lobes operate below that engine speed.

North American bikes must adhere to slightly tighter sound regulations than European bikes do, and therefore there is a small difference in engine output. The factory claim is 204 hp for Europe and 202 hp for North America. BMW’s Canadian website publishes the European kilowatt numbers but uses the North American value, which translates to 207 hp – which is generous. In any case, the new engine is roughly four per cent more powerful than before. However, the big gains are at lower revs, a result of BMW’s ShiftCam. At least 73 ft-lb of torque is available beginning at 5,500 rpm, peaking at 83.3 ft-lb at 11,000 rpm. Fuel economy is said to be four per cent better. 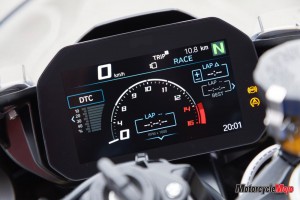 control, wheelie control and engine braking, launch control and a pit-lane speed limiter. The package also includes adjustable ride height and swingarm pivot, and carbon fibre wheels, among a couple of other race-oriented bits, for $4,875 above the $18,900 starting price.

If you prefer all of the electronics and the chassis adjustability but without the carbon fibre wheels, a Race package also is available for $2,075. Also optional, for a $1,525 premium, is BMW’s Dynamic Damping Control (DDC) electronically adjustable suspension, which has completely new internals that provide a much broader adjustment range. This last package also includes heated grips and cruise control.

My test bike was fully loaded with the M package and the DDC suspension. The bike was equipped with the OEM Bridgestone Hypersport S21 radials for the morning track sessions, which were switched to Bridgestone racing slicks for the afternoon.

On my first session I followed Jürgen Fuchs, a former 250 cc and 500 cc GP rider, at a much faster pace than I’d normally go on my first time out. However, with the bike set to Race mode, it responded with confidence-inspiring feedback, allowing me to go from zero to 95 per cent of my capability with remarkable ease. We rode fast enough in that first session to feel the OEM tires squirm around through the very fast and long right-hand sweeper that opens up onto the kilometre-long front straight.

During my second session, I experienced a 160 km/h rear slide when riding through that sweeper on those same OEM tires. Skill has taught me to stay on the throttle when experiencing a rear-wheel slide, which is what a rider must do now on open-class supersport machines that have advanced traction-control systems. Closing the throttle when in a slide throws off the system, so you must learn to trust the intervention and, in the case of the S1000RR, adjust to your riding style and let it do its work. Despite the eye-opening slide, the rear tire just came back into line and the bike straightened out with no indication that electronics did anything to intervene, although they most likely did.

Those first two sessions really emphasised what I’ve always appreciated about BMW’s S1000RR: it is forgiving, it is easy to ride and it is blistering fast without being too demanding. In comparison, a Ducati Panigale is also blistering fast, but it taxes your mental and physical strength.

After lunch, I hopped onto a bike equipped with slicks and I selected Race Pro 2 mode, which doesn’t back off traction control and ABS to minimum, but backs them off enough to allow traction to give in a controllable manner. I reset the wheelie control to Level 2 because I prefer to have both wheels on the ground most of the time. The difference between wheelie control levels 1, 2 and 3 is the amount of lift the bike will permit before intervening; Level 2 allows about 5 cm of lift.

Grip was much higher on the slick tires, and their slightly different profile also quickened turn-in. And despite going faster through the same right-hand sweeper where I’d experienced a slide earlier, this time I felt no slip whatsoever. Throttle response was aggressive yet still manageable in Level 1, and although the front wheel lifted off the ground occasionally while exiting the track’s first-gear chicane, that occurred very smoothly, returning the front wheel to the ground with no further intervention on my part. None of this was felt from the rider’s seat, although the level of some of the electronic intervention was set a bit too low for me to trigger. I saw the traction control light flash only in the earlier sessions when I was riding on the OEM tires and in the non-Pro Race mode; set at a lower level of intervention and on the slick tires, lighting it was beyond my skill level.

Fortunately, I have some experience on various S1000RR models on this very racetrack, so I can make direct comparisons among the old, the new and the exotic. The last time I rode a bike on this track was to ride the $95,000, carbon fibre-framed HP4 Race model. I also rode the previous-generation S1000RR during that test. While the S1000RR always has been my favourite of the open-class supersport machines because it is easy to ride fast, it felt almost truck-like next to the ultra-lightweight HP4 Race. This new S1000RR –when equipped with the M package electronics and DDC suspension, at least – sits somewhere in between. That’s a big leap from the previous model and insures that – for now, at least – the BMW S1000RR will remain my favourite litre bike.