For the first time ever in the past 31 years since the World Superbike Championship (WSBK) began in 1988, there were no twin-cylinder motorcycles of any kind on the grid when the WSBK series kicked off on the Phillip Island Circuit in Australia last February. It was a watershed moment for Ducati, as there wasn’t a Desmo V-twin Ducati on the track. In addition, all the bikes on the grid now have one-litre engines for the first time since 2008, when the Fédération Internationale de Motocyclisme (FIM) lifted the capacity ceiling for twins to 1,200 cc versus 1,000 cc fours. 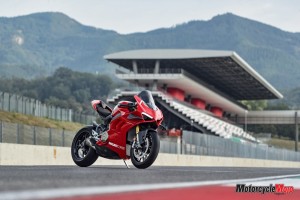 Ducati finally has ended its line of Desmo V-twin racers. Their history stretches back to 1972, when Paul Smart won the Imola 200, the Italian manufacturer’s debut race with a 750-cc Desmo V-twin. Fourteen World Superbike titles later – the last of them won as long ago as 2011 by Carlos Checa with a 1098R – Ducati has now finally produced a four-cylinder model for Superbike racing, closely based on its Desmosedici V4 MotoGP contender, originally introduced back in 2002, with the latest version (on which Andrea Dovizioso has been runner-up in the past two MotoGP World Championships to the Márquez/Honda duo).

That Desmosedici technology was already brought to the mass production marketplace one year ago with the Panigale V4 S. However, that bike’s 1,103 cc motor made it ineligible for Superbike racing. But at the 2018 EICMA Milan show, Ducati unveiled its first-ever four-cylinder street-legal superbike – the 998 cc Panigale V4 R. WSBK homologation rules place a price cap in the country of origin for homologated models, which must be fully street legal as well as have a minimum of 125 bikes built before the first race, 250 by the end of the first year and 500 by the end of Year 2.

Production of the V4 R began in January, prior to the Phillip Island race. The V4 R is Ducati’s most powerful customer road bike yet, delivering 221 hp on a bike 172 kg dry weighing for a power/weight ratio of 1.28. Add on the racing kit, which includes an Akrapovič race exhaust, and power rises to 234 hp and dry weight is reduced to 165.5 kg. 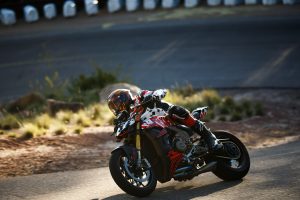 But Ducati doesn’t regard the V4 R as a limited edition special like the 500-off Superleggera, which sold out immediately in 2017 despite its $85,000 price tag and half the number of cylinders. “We anticipate building at least 1,000 examples of the V4 R in 2019,” says Paolo Quattrino, Ducati’s product manager,. “While, of course, it’s a very expensive model, we believe that the high level of technology and the outstanding performance will attract many customers – not only committed ducatisti, but we hope to conquest customers from other brands. So this will not be a limited edition model.” The price in Canada is set at $47,995.