While the looks are a little over the top, the handling and performance are spot-on.

Svartpilen doesn’t exactly roll of the tongue. It’s an unusual name, and I wondered if it actually meant something. It does, in Swedish. In English it translates to “black arrow.” So now you know.

While I wasn’t initially fond of the 2019 Husqvarna Svartpilen 701’s styling when I first saw it in pictures, it actually looks really cool in three dimensions. I immediately appreciated its bold design once I saw it in the metal at its international press launch, held in Lisbon, Portugal. As a bonus, the bike backs its unique styling with excellent performance. 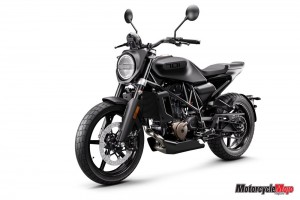 KTM acquired Husqvarna Motorcycles in 2013, and that collaboration has resulted in several street-oriented KTM-based Huskies, including the Svartpilen. That’s why beneath the Svartpilen’s bold bodywork – in which you’ll see hints of naked bike, dirt tracker and Mad Max – you’ll find a tweaked KTM 690 Duke. And that’s a very good thing.

KTM’s 693 cc liquid-cooled single is the most powerful production single ever made — by anyone. It claims 74 horsepower and 53 ft-lb of torque. That’s about the same horsepower as Suzuki’s SV650 V-twin, with about 8 ft-lb more torque on the Svartpilen. The engine has two counterbalancers; one counters crankshaft vibration, and another one in the cylinder head does the same for the valve train. The engine transfers power through a slick-shifting six-speed gearbox.

While the frame and swingarm are the same as on the KTM 690 Duke, other chassis components are not. Unlike the Duke’s WP suspension, which is adjustable only for rear preload, the Svartpilen is equipped with higher-spec WP components. Its 43 mm inverted fork and single rear shock are adjustable for compression and rebound damping, and the rear shock is also adjustable for spring preload. The Svartpilen also has 15 mm more suspension travel than the Duke, at 150 mm front and rear.

Other chassis changes include a more upright riding position than on both the Duke and the Svart’s sibling, the Vitpilen 701. (Vitpilen translates to “white arrow.” So now you know.) An 18-inch front wheel on the Svartpilen takes the place of the 17-incher on both those other two bikes. While the Vitpilen’s chassis geometry is identical to the Duke, the Svartpilen’s is a bit more relaxed due to its larger front wheel. The Svartpilen also has a more relaxed riding position than either of those bikes, with a higher handlebar and lower foot pegs.

The Svartpilen is rather svelte, tipping the scales at 158.5 kg dry, or about 164 kg full of fuel. Traction control is standard on the Svartpilen, whereas it was part of an optional track package on the Duke. The Svartpilen also has an electric quick shifter, although it only works when shifting up. ABS is also standard, and like the traction control, it can be turned off.

Among the most exciting press launches I’ve attended in the past were those where the hired route guide rides like he’s trying to evade capture. That was the case on this ride, which took us west out of Lisbon and toward Cascais, then north into the mountains. I followed the lead rider, a local fellow, out of our hotel’s parking lot and, after a brief wait at a nearby traffic light, he took off between cars as if he were riding in a rally. Lane splitting and filtering is the norm in Europe, but this was extreme. This was promising to be a fun ride, prompting a grin that hurt my cheeks.

The rolling slalom between cars really emphasised the Svartpilen’s nimble handling, slender framework and torquey engine. The gearbox shifted with a feathery touch, although I refrained from using the quick shifter and mostly used the clutch in town because the latter provided smoother gear changes. Using the quick shifter increased the effort at the shifter, and in town the shifter was being called into service frequently.

Once we got on the highway, the speeds increased and the Svartpilen easily maintained 130 km/h, or about 10 km/h above the posted speed limit, without straining. (Actually, highway traffic in Portugal moves along even faster than that.) While the engine is mostly smooth at highway speeds, some buzzing does transfer through the seat and the mirrors blur at higher speeds with the engine spinning above 6,000 rpm.

The ride only got better when we hit the winding mountain roads north of Cascais. The wide handlebar provides lots of leverage for manoeuvring around tighter bends, without inducing a weave through faster sweepers. Rolling on the gas between turns is a blast on this bike, as it lunges forward regardless of the selected gear. Because of the engine’s broad power band, shifting is mostly optional. 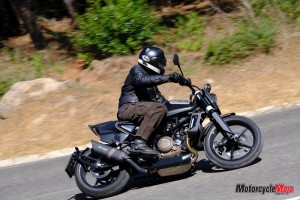 The suspension really impressed me. Usually naked-bike suspension is tuned almost supersport-stiff, which returns exceptional handling but a toll on rider comfort. The Svartpilen has what I’d consider a Canada-approved suspension. We took a turn onto a tight, narrow and twisty road with bumpy, patched and broken pavement. Our near-escapee lead rider never slowed, so I just followed, surprised to discover that the Svartpilen railed along, soaking up bumps without upsetting the chassis while returning confidence-inspiring handling. A sport bike would have probably folded in two under these conditions.

The only suspension adjustment I made after our first rest stop was to increase the rear rebound damping, which initially was too soft for my weight and caused the bike to wallow a bit at higher speeds. A flat-blade screwdriver is needed to make the adjustment, which nobody had on hand, so I improvised by using the ignition key, which worked remarkably well.

About my only gripe with the bike is with the instrument cluster. While the gauge itself is a large round item, the display area is much smaller. It also sits at an awkward angle that makes it hard to see, and the rubberized trip-meter buttons to the left of the gauge are hard to use, as they need a lot of pressure to depress.

Uh, There is One More Thing

There’s one more thing that puts me off about the Svartpilen 701. It’s not the handling, which is exceptional. It’s not the engine’s output, which is smooth enough in delivery to make a novice feel at ease, yet more than powerful enough to satisfy an expert rider. And it’s not the styling, which I find to be fresh, unique and quite functional.