In true KTM fashion, the company’s newest Sport Tourer emphasizes sport bike-like features. It could be considered the most radical long-distance bike on the market

While KTM is already Europe’s largest motorcycle manufacturer, it continues to ramp up its sales. One of its palpable hits that helps to drive that increase is the most expensive model in its entire range: the 1290 Super Duke GT, which first launched three years ago. KTM, an Austrian company, offers a unique take on sport touring – with emphasis on the “sport.” The sales figures indicate that this model completely addressed KTM president Stefan Pierer’s concerns before it appeared. “I don’t think a sport tourer in the classic way matches 100% with KTM’s brand identity,” he told me. “Our customers expect something sporty made the KTM way – not like other manufacturers do it.” Well, that certainly describes the GT, which since its 2015 launch has provided its owners with the dazzling performance and benchmark handling of the “take no prisoners” Super Duke R streetfighter (a.k.a. The Beast) combined with everyday practicality and user-friendly convenience. The combination is a successful marriage of opposites. 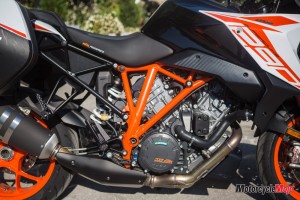 Despite being the first ever KTM V-twin on-road model with touring pretensions, the GT has been such a hit that KTM has devoted some of its R&D budget to making the bike better still. So, at Intermot 2018, KTM unveiled the seriously improved 2019 version of the model and, just a short time later, the company asked me to come ride it for a day. My test-ride conducted in glorious sunshine and on superb riding roads running up and down the hills and valleys of KTM’s Upper Austria hinterland.

The 2019 Super Duke GT is even more fun to ride than before, as it is a sharper, stronger and more refined version of its predecessor in every way – a fact underlined by the outgoing 2018 model GT, which Luke Brackenbury, KTM’s PR manager and my riding companion, had brought along to compare with the new bike. Swapping back and forth between the two was an education: I never would have thought that the outgoing model would seem quite so dated, as it had set new sector standards during its 2015 release. 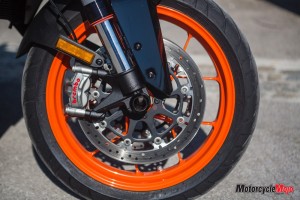 Part of the contrast between the two bikes is visual. Just looking at them both side by side as you walk toward them, it’s evident that the new model’s heavy style facelift by Kiska Design has given the 2019 GT more presence, as well as a greater sense of substance than before. The new, shapelier windscreen is also quite a bit more protective at speed than the older model’s and is safely adjustable with one hand while on the go and through nine positions over a range of 50 mm. Despite the extra protection the windscreen gives when raised to the max on fast stretches, it doesn’t drum at higher speeds. Cruising at 160 km/h with the V-twin engine running at 6,500 rpm was surprisingly relaxing for a neo-naked sports tourer offering excellent protection, very little residual wind blast and no excessive noise.