With a proven race history, the revised 2019 R3 should be a great bike on the track or the street

Not that long ago, if you were just getting into motorcycling and were looking for the affordability and easy operation of a small-displacement motorcycle, you had to settle for diminutive cruisers such as the Honda Rebel 250 or the Yamaha V-Star 250. Those were tiny bikes, and if you were looking for a sportier option of more adult-sized proportions, there really wasn’t much out there. Fortunately, there is a renewed interest in small-
displacement bikes these days (notice we’re not calling them small bikes), and now a much wider selection of normal-sized sport bikes displacing less than 400 cc is available. 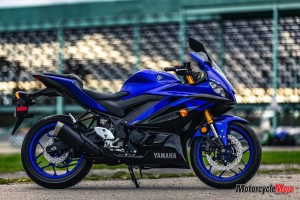 Honda has the CBR300R; Kawasaki, the Ninja 400; KTM, the RC390; Yamaha, the R3; and Suzuki – at least, for 2018 – had the GSX250R (which isn’t in the 2019 lineup). Even BMW jumped into the mix with its G310 series singles, as did Husqvarna with its Svartpilen and Vitpilen 401. These are all normal-sized motorcycles that offer respectable performance, even when measured by an experienced rider’s standards. Aside from easy, confidence-inspiring handling, bikes undercutting the 400 cc threshold are also insurance-friendly in most provinces. There’s even a bona fide national racing series, the Amateur Lightweight Sport Bike series that showcases most of these bikes. Jake LeClair won the inaugural championship last year aboard a Yamaha R3.

Yamaha mildly refreshed the R3 for 2019, then sent out invitations to ride it on the roads in Ontario’s Bay of Quinte area and on the track at Shannonville Motorsport Park. We also got a chance to ride a race-prepped 2019 R3, which will be competing in this year’s Amateur Lightweight Sport Bike championship. (See Prepped To Win Races.)

Changes – Some Small, Some Big 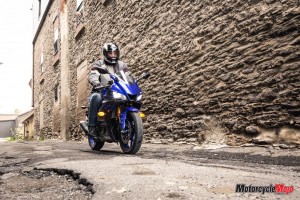 The list of changes for 2019 is rather small, but a couple of those changes are significant. The most obvious changes were made to the bike’s styling. The fairing is styled more like Yamaha’s bigger R models, and includes an air intake between the headlights. Unlike the bigger R models’ air intakes, which force air into the airbox, the R3’s air intake “ducts” cooling air to the radiator. The headlights flanking the air intake are LEDs, and they are much brighter and draw less current than the 55-watt halogen bulbs they replace. The restyled bodywork is more aerodynamic and is said to have increased top speed by 8 km/h from whatever it was, as Yamaha hasn’t divulged the previous number. Ergonomically, the clip-ons have been lowered by 22 mm.

Replacing the previous model’s large, round analog tachometer and smaller LCD screen is a large, rectangular LCD screen. The new screen offers all of the same information as its predecessor instrument panel, so the change is mostly aesthetic. The new dash is functional and easy to read when you are tucked in and the throttle is pinned, although I prefer the previous setup with its large, round tachometer.

The biggest change beneath the bodywork is the use of a 37 mm inverted fork, a change from the 41 mm conventional fork on the previous model. While the diameter of the R3’s fork tubes is smaller than those on its predecessor, inverted forks are inherently stiffer by design. The R3 comes equipped with Dunlop Sportmax GPR-300 tires, although Yamaha installed Dunlop Sportmax Q3 race-compound tires on one of the stock bikes for our test rides.

Unchanged is the 321 cc parallel twin engine, as well as its fuel-injection mapping. Yamaha Canada doesn’t publish horsepower figures; but in Europe, Yamaha claims engine output to be 41 horsepower. Rob Egan, who operates the CSBK dyno, says a stock R3 makes about 40 hp at the rear wheel, and a race-prepped one makes about 43. A Ninja 400 on the same dyno makes about 45 hp, while a Honda CBR300R makes about 32.

While ABS and non-ABS versions were available until last year, only an ABS-equipped R3 is available for 2019. The changes have driven up the price by $400 to $6,299 compared with last year’s ABS bike. Last year, the price of the non-ABS R3 started at $5,399.

We began the day with a cold ride through the picturesque countryside of Bay of Quinte. On the road, there’s nothing really outstanding to report about the R3. It is a pleasant street bike to ride, and the lowered handlebars don’t really encroach on ride comfort, although the former taller bars were certainly better for long-distance trips. There’s enough legroom that even a six-foot-tall rider like me doesn’t feel cramped.

The engine isn’t a powerhouse at lower revs, although the bike will chug along smoothly in top gear at speeds as low as 60 km/h. Still, you’ll have to drop several gears if you expect any kind of acceleration from that speed. If you let the engine spin past 9,000 rpm, though, the R3 triggers an instant grin. At that rpm, the engine becomes a little screamer and the bike becomes deceptively quick. You can feel a slight jump in the power band when the tachometer needle sweeps past that 9,000 rpm threshold, urging you to use the shifter vigorously to keep the revs up there.

The six-speed gearbox works smoothly with a light touch, which isn’t entirely unexpected on a lightweight bike. The only item that I felt could have used improvement is the front brake, which has a soft initial bite and requires a moderate amount of effort when stopping.

At the track, the R3’s rigid chassis stands out. The bike is stable, yet steers quickly. I’d ridden the previous model on a racetrack and I remember it could have used a firmer fork. The new setup is indeed firmer and more rigid, providing better front-end feedback. And while the front brake lacks feel, with a hard enough squeeze, it slows the bike hard and without fading. The only deterring factor to riding at an all-out pace on the R3 is the stock Dunlop tires. While they provide a surprising amount of grip, they squirm and skip about over bumps at near-maximum lean.

A session on a stock R3 equipped with Dunlop Q3 race rubber permitted a quicker pace, easily enabling peg-scraping lean angles. These tires return the confidence-inspiring feedback and surefooted stability lacking in the OEM tires. And the chassis easily handles the extra grip without any ill effects on handling. Sometimes installing high-grip tires onto a bike with a less than stellar chassis actually amplifies the chassis’ weaknesses. Not so on the R3, which handles better in every respect compared with the R3 with OEM tires. I do have a preference for those Dunlop Q3s because when the R3 is equipped in that manner, it is a very good sporting street bike that you could ride to the track, then ride on the track after only paying your entry fees and pulling the mirrors.

Proving Itself On The Track

While the Yamaha R3 might not have the most remarkable spec sheet in the sub-400 cc category, especially when compared with the larger-displacement and more powerful offerings from Kawasaki and KTM, the R3 nonetheless proves its performance potential on the racetrack. Not only did the R3 win a championship last year, but at the time of writing, halfway through the racing season, a Yamaha R3 had won every round of the CSBK Amateur Lightweight Sport Bike championship. So, not only does the R3 now resemble its bigger Yamaha R siblings, it backs up those looks with impressive performance.