After more than a century of internal combustion, the Harley-Davidson Motor Co. is looking at its future with a whole new technology.

You know times are changing when the biggest manufacturer of large-displacement motorcycles in North America produces a two-wheeler propelled by electrons. The Harley-Davidson LiveWire is the Motor Company’s first-ever emissions-free electric motorcycle, and it is an important new direction for a company that has been relying on gasoline-powered internal-combustion engines to power its products for more than 115 years.
Harley held the international launch of the LiveWire in e-friendly Portland, Ore., where, despite my initial aversion to fume-free motorcycles, I discovered that this electric bike actually makes sense – well, mostly. 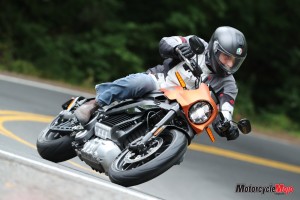 The heart of the LiveWire is its 78 kW (105 hp) electric motor that produces 86 ft-lbs of torque. The fascinating thing about electric motors is that they produce their peak torque as soon as they begin to spin. From the rider’s seat that means you’re getting litre-bike torque right off the start. The electric motor uses reduction gears to transfer power to the rear wheel, and Harley designed the gears to produce the LiveWire’s unique whine. The electric motor and various other components are liquid-cooled, so there is a small radiator mounted behind the front fork. The motor is an aluminum-coloured unit that sits at the very bottom of the bike.

The bike has two batteries. A small 12-volt battery powers ancillaries, such as the lights and the ECU. The main 15.5 kWh lithium-ion battery is contained within a big, finned aluminum case that also contains the battery-management electronics; it’s the single largest component on the bike and is visible behind the frame. The entire assembly is called a renewable energy storage system (RESS), and is manufactured by Samsung. The 250-volt RESS is a stressed component of the chassis, combining with bolt-on frame channels and a separate steering head assembly to provide rigidity. 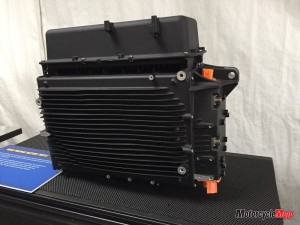 The RESS takes 12.5 hours to charge fully from empty when using the provided 110-volt charger (a Level 1 charger), which plugs into a standard wall outlet. Using a publically accessible 24 kW DC fast charger (Level 3), the RESS can charge to full from completely empty in an hour. You can also plug the LiveWire into a Level 2 charger, but because of the way the bike is configured, it will charge at the same rate as when using a Level 1 charger, so there’s no advantage to doing so.
I initially was skeptical about Harley’s use of only Level 1 and Level 3 charging, as most people who drive an electric car use a 240-volt Level 2 charger at home. These chargers provide a much quicker charge rate than 110-volt Level 1 chargers, and are much more affordable and practical for home installation than Level 3 DC quick chargers are. After almost 10 years of LiveWire development, though, Harley’s engineers discovered that for the LiveWire’s intended use, Level 1 and Level 3 charging makes the most sense. Harley reps at the launch mentioned repeatedly that the LiveWire should not be regarded as a conventional motorcycle
– and if a long-time rider does so, he or she probably is not the right customer for this machine. It’s designed for mostly daily rides within a specific proximity to home and, in that context, the LiveWire’s range is good enough.

After an overnight charge, for example, you can ride off with a full charge. When a top-up is needed during the day, a Level 3 charge during a coffee or lunch break will recharge the battery with enough energy to continue your ride. The problem is that Level 3 chargers are not as common in Canada as Level 2 chargers are yet – at least not in any province outside of Quebec, where the former are plentiful. Authorized LiveWire dealers, of which there currently are 17 in Canada, will be equipped with Level 3 chargers. 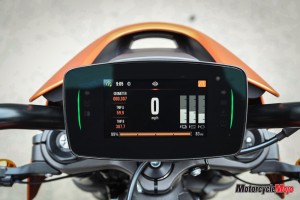 Claimed battery range is impressive nonetheless: 235 km in the city (regenerative braking helps extend range) or 152 km of combined city and highway riding. Unlike gas-powered vehicles, electric vehicles get better mileage in the city because they can recuperate energy when slowing down, which you do often in city traffic. The LiveWire has regenerative braking, which can be adjusted from practically nothing to a level high enough that you can almost ride without ever touching the brakes. Because the LiveWire slows quite hard when the regeneration is cranked up, the brake light is also triggered by G-forces generated when slowing down, and the light can come on without touching the brakes.

The LiveWire has lean-sensitive ABS and traction control, as well as rear-wheel-lift mitigation, which prevents the rear tire from lifting under heavy braking. The rear wheel also has drag-torque slip control, which prevents the wheel from hopping when braking hard with the regeneration dialled up.

The LiveWire has seven ride modes: four of them are factory presets – sport, road, rain and range – and three others are programmable. The preset modes adjust throttle response, traction control and other parameters, just like on a conventional bike; range mode is designed to extend the bike’s range by softening throttle response and cranking up the regeneration braking.

Another bit of high-tech trickery is H-D Connect, which connects the bike bike to a cellular network and combines with the H-D App to offer many useful features. This connectivity allows you to monitor the bike’s charge status using your smartphone. The app also provides alerts if the bike is being tampered with; gives service alerts (although those will be quite infrequent since there’s not much that needs tending); locates charging stations and displays their locations on your phone’s screen; and via your phone’s Bluetooth connection, displays turn-by-turn directions on the bike’s display screen.

There’s a small adaptation to make when riding an electric motorcycle. The LiveWire turns on via the kill switch when you have the key fob in your pocket. The bike has a start button that turns on the electric motor before you can ride away. The LiveWire is easier to ride than a conventional motorcycle is because the lack of a gearbox provides a twist-and-go riding experience, but the bike’s high torque doesn’t mean this is a beginner bike; you can, however, adjust it to ride like one using a custom mode. There’s no engine noise, although the LiveWire isn’t completely silent. It produces a slight gear whine when accelerating, which is actually tuned into the motor’s reduction gear. Another slightly odd characteristic is the “pulse” the LiveWire produces through the handlebars when you’re at a stop. The pulse is very subtle, but it’s there to let you know the bike is running.

The LiveWire feels heavy when lifted off its side stand because a 100 kg chunk of the bike’s 249 kg weight is contained in the centrally located RESS. The gauges are displayed within a 4.3-inch TFT touchscreen that has a multitude of functions, and the touchscreen pivots on its mount to adjust for riders of different heights. The riding position is almost naked bike-like but with a slightly forward lean to the low handlebar – the LiveWire actually feels similar to a Ducati Monster from the saddle – at least at standstill.

Twist the right hand grip and you get a seamless rush of acceleration that doesn’t really stop until upward of 160 km/h. Rolling on the throttle is among the LiveWire’s most redeeming features, providing a forceful forward rush that is free of gear changes. Adding to the bike’s tempting “twist me” throttle is a mostly silent operation that stealthily facilitates delinquent behaviour. Claimed top speed is 177 km/h, and the LiveWire seems quite capable of attaining that speed.
Steering is light, and while the LiveWire turns in with relative ease, it requires some effort at the handlebar to maintain a lean or to tighten up mid-corner – almost as if the bike was rolling on an excessively wide rear tire. The LiveWire is fitted with supersport-sized 17-inch wheels, with a 120/70 tire up front and a 180/55 on the rear. The fully adjustable Showa suspension could have easily come off a supersport machine; it was set up too firm for me, and I would have set it softer if a screwdriver had been readily at hand.

After a 100 km ride within Portland and on the surrounding winding roads, the battery’s level dropped to 34%, or good for about another 50 km. This is bang on Harley’s claim. I did nothing to try to conserve energy, and was actually quite hard on the throttle.

But it’s Oh, So Pricey

There’s no doubt that the 10 years of development that went into the LiveWire has produced a refined first attempt at electronic propulsion. The bike’s performance is on par with at least a middleweight four-cylinder sport bike or a sporty twin. The LiveWire’s range and charging rate are reasonable enough that you can enjoy weekend rides with your buddies who are riding conventional machines, as long as they don’t mind waiting while you charge back up.
Harley is renowned for its big twins, and there’s no need to worry that the company is going to stop producing them anytime soon despite the introduction of the firm’s first electric bike. Harley will continue to cater to its traditional big-twin customers, but it also needs to introduce a new breed of rider to U.S.-made motorcycles. The LiveWire is part of this strategy, but there also is an upcoming new platform based around an entirely new liquid-cooled V-twin, which will include a naked bike, a bobber and an adventure bike.

One thing that’s hard to justify is the LiveWire’s price; at $37,250 it is the most expensive non-CVO model in Harley’s lineup. And the LiveWire is entering a category that already includes some stiff competition from Zero. The Zero SR/F is a stylish electric naked bike that boasts an impressive spec sheet, claiming a range of 259 km in the city and 198 km on the highway, 140 ft-lb of torque and a price of $24,890. Probably the weakest link in Zero’s formula is its dealer network, which currently stands at 10 locations.

Aside from the LiveWire’s exclusive pricing, though, the bike makes sense – even among conventional internal-combustion motorcycles. Some of my recent rides on my own bike covered about 200 km, which is easily achievable on the LiveWire, as long as a Level 3 charging station is available and conveniently located. For personal daily use and considering the way I ride, I could ride the LiveWire regularly and I wouldn’t miss stopping at gas stations one bit.