Back in the ’60s, the “British Invasion” forever changed popular culture as the music from bands such as the Beatles, the Stones, the Who and the Kinks created a fever of excitement that spread around the globe.

A similar sensation was happening in motorcycling during those years. Crowds of young riders in London, dubbed Rockers or Ton-up Boys (British slang at the time for riding above 100 mph) wore Brando-inspired black jeans and leather jackets as they raced across the city. Most famously, these riders dashed between London’s most popular cafés at the time – the Busy Bee in Watford and the Ace Café in Stonebridge – on stripped-down, highly personalized Triumphs, BSAs, Nortons and new-to-the-scene Japanese bikes we’d recognize as café racers today.

The Anatomy of a Modern Café Racer 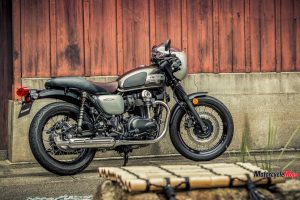 Yes, that’s a long-winded introduction to Kawasaki’s W800 Café, but the truth is the model wouldn’t exist today if it weren’t for London’s Ton-up Boys. By the mid-60s, Kawasaki was sneaking up on the British brands with bikes such as its BSA A7 clone – the W1, the great-grandpappy of today’s W800.

What’s in this history lesson for me is the part about how café bikes are historically related to actually having coffee, making my plans to just hang out at some cool biker cafés in Los Angeles perfectly legit instead of racking up a ton of kilometres on the W800. Because if there is one thing that’s immediately obvious about this bike, its that it’s way more trophy than traveller.

And really, though, the W800, which has been available in Europe since 2011, is just so watchable – especially this Café version, with its tidy, retro-style headlight-mounted fairing, sparkling two-tone paint and stitched pleather saddle, black-rimmed 18-inch wire-spoke wheels and, of course, those long, slim tailpipes that end in a pair of peashooters.

The W800’s most fabulous beauty mark, however, is its bevel-driven overhead cam and exposed tower shaft situated against the two-toned retro finning of the air-cooled SOHC vertical twin, an engine with direct lineage to the original mid-1960s 650 cc W1. 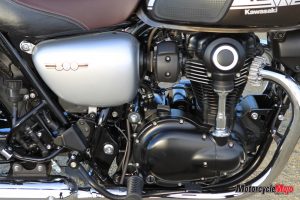 When I first picked up the Café, I was faced with some interstate riding. Unfortunately, the W800 is at a real disadvantage on the super-slab – first, because the sporty “bikini” fairing does little to block the wind and, worse, the fairing sends the wind blast up to neck level so that my helmet bobbled around. The standard W800 with its higher bar might feel better at freeway speeds, especially if a nice windshield is added.

The issue that’s more difficult to solve is vibration. While riding around town and I am all over the power band, the W feels pretty fun. But when I am running a consistent throttle, avoiding some nagging buzz is tough to do. What begins as a deep pulsation felt mostly through the bar and seat up through 4,000 rpm quickly spools up into a high-frequency vibration – imagine an electric toothbrush – above 4,000 rpm. Sadly, any sweet spot is right near the 7,000 rpm red line, when travelling at speeds in excess of 130 km/h.

To make matters worse – at least, for me, in Southern California, where the freeways have deep squiggly “rain grooves” – the stock Dunlop 300K GP tires, which look just like old-school rubber from the 1960s, track the grooves and shimmy the bike like crazy. Some journalist friends had warned me about this, and I thought them losers for being sketched out by rain grooves. The warning turned out to be no joke, making the tires the first thing I’d change on the bike. Luckily, grooved pavement is a rarity in the provinces.

Once in the heart of the city, I could more readily appreciate the W800 Café’s charms, including the dutiful purr slipping through its retro silencers. The bike, being so slim in stature, is easy to mount, although a lofty 790 mm seat height may limit accessibility. A hefty curb weight, listed at 222 kg, is well-centred and the bike feels light enough when I was shuffling around the parking lot.

That cool Clubman-style bar insinuates clip-on café-racer ergos, and does create a reach for the rider. And in what feels like engineering sleight of hand, the bike’s beautiful, easy-to-read analog instrument pods are situated high in the cowling, which gave me a feeling of being in a tank-embracing crouch at all times.

Foot pegs on the Café are high enough to feel sporty, yet were placed evenly under me, allowing my upper body to be supported – at least, partly – by my legs instead of my wrists. 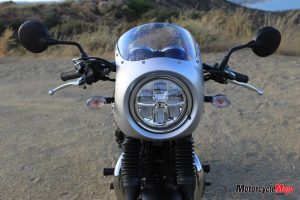 The first coffee shop I hit in Southern California was the famous Deus ex Machina in Venice because I knew the W800 would find some retro friends to park with. Locals just say “Deus Café” – probably because listening to everyone mispronounce “machina” is so tiresome. (Hint: it doesn’t sound like “machine-ah”). What this Latin term meant in historical Greek culture is “god from the machine,” and it refers to a plot twist in playwriting where a god is introduced into a scene – at times, actually lowered onto the stage using a cable device (that is, a “machina”) to resolve entanglements in the plot.

Already well-caffeinated, I explained all this to a couple of non-riding tourists sitting near me on the back patio of the Deus Café overlooking a small sea of motorcycles, ranging from vintage rat to shiny new. However, my companions had already bought the $50 T-shirts and were happier with the café’s appropriation of the term. When I pointed out the W800 in the parking lot, they asked me if it was old or new – a question I would hear several more times on my tour of cafés, which told me Kawasaki had really nailed the bike’s styling.

I clutched my way out of the Deus parking lot just as an MV Agusta meet-up was getting under way and motored up Venice Boulevard to Alana’s Coffee Roasters, where I tossed back another cup of joe before “racing” up surface streets to bicycle-centric 10 Speed Coffee in Santa Monica. Of course, I was full of pastries and caffeinated to the gills by this point, so I headed up into the Santa Monica Mountains to burn off some energy.

On these steep and twisty mountain roads, the W800 Café was pretty fun to ride at a moderate pace. While the power is nothing to write home about, torque in the low range is sufficient and there’s a pleasing amount of juice available between 4,000 and the 7,000 rpm red line.

The steering, which feels a bit heavy around town, lightens with speed and, if I was smooth, the bike tracks a true line through the trickiest of corners. Suspension, however, is on the soft side and a bit springy when I hit a bump or make adjustments with the brakes or throttle. The sensation is more rocking horse than rodeo, though, and dragging a smidgen of rear brake helps calm things down.

When stopping, the W800’s ABS-equipped single discs front and rear will do the job, although not quite to the standard we expect from modern brake sets. To be fair, even though the Café is styled as a “racing” bike, no one is going to buy one with the intention of winning races. The ironic thing is how the W800 Café feels just a little too much like a heritage bike, albeit one that won’t need constant wrenching.

The best “modern” feature on the W800 is its super-light, goofproof assist-and-slipper clutch, which allows for clutchless shifts and provides truly feather light clutch action when the lever is employed. The clutch also kept the rear wheel from hopping if I prematurely shifted into too short a gear.

The Trouble With Oxymorons

Late in the afternoon, I want to find one more neat café, but end up at a Starbucks instead. Nothing nostalgic here, but the efficiency factor of being able to order from the Starbucks app before I even walk through the door is satisfying. As with modern bikes, ease of use can outweigh lack of character – for me, at least.
If you’re in the market for a modern classic motorcycle, however, then character is high on your list of priorities. That the W800 Café has in spades. However, when you compare it to some of the other heritage bikes on the market, you’re going to need to triangulate style versus functionality versus expense.

I’d be more enamoured with the Café if I felt it were reasonably priced, but $11,499 is a big ask. Its basic sibling, the straight-up W800, which is the same bike minus the Café styling, is $1,100 less … and undoubtedly more versatile.

And then there are the British options, a resurgence of bikes coming straight from the country where café racing was born. A comparable heritage bike from Triumph – for example, the new Street Twin – may not be as period-perfect with its liquid-cooled, eight-valve, SOHC parallel-twin, but the heritage version is lighter and faster and $10,600. In fact, nostalgia comes in many modern flavours these days, from the classic Royal Enfield Continental GT ($8,240) to BMW’s extremely cool R nineT Racer ($15,050).

As I pulled up to my friend’s house, where I would spend the night in the Hollywood Hills, I parked the W800 Café in front of a garage that was literally spilling over with vintage European bikes and cars. And as I stepped off the Kawasaki, I felt a wave of reverence as it melted right into the cool scene.

The bike seemed to be saying, “Give me a break. It’s not easy being a ‘modern classic.’” And it’s true. Finding fault with a heritage motorcycle for feeling too retro is unfair. And here, in this garage, the W800 Café certainly seemed special … and not only for the fact it wasn’t leaking oil.