Using myriad parts from various manufacturers and a ton of handmade pieces, this 40-year-old Honda truly is a one-of-a-kind modern machine.

Take a bit of Ducati, a dab of Triumph and a smidge of BSA and mix in a lot of Honda. Add in plenty of hand-fabricated pieces and you get this custom 1980 CX500. In fact, builder Bob Klemenchuk of Calgary says he nicknamed the project Eclectic Moto because of the wide variety of components he used in creating the machine.

Although Klemenchuk has been immersed in the world of performance European automobiles for most of his adult life, he’s always been interested in motorcycles. This, however, is his first complete custom two-wheeler.

“I do communications for startups,” Klemenchuk says of his professional life. “But I’ve always played with cars as a hobby and I’ve also worked on bikes for friends – either painting them or fixing broken plastics.” 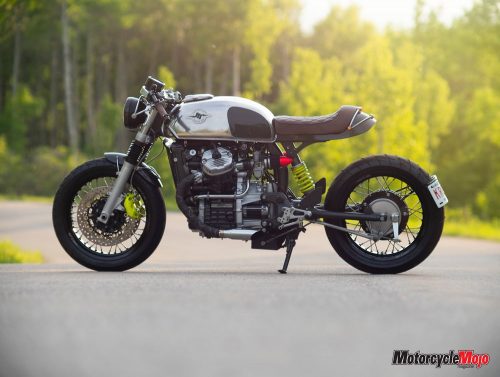 More recently, Klemenchuk began producing carbon fibre parts for cars. No surprise, then, to see many one-off carbon fibre touches on Eclectic Moto, a project that Klemenchuk says stemmed from his long-standing admiration for the “odd design” of the Honda CX-series
of machines. He first learned of the CX models after reading an article in Popular Mechanics magazine while attending university.

That admiration percolated for a few decades until two years ago, when he began to comb through motorcycle listings on Kijiji. For $600, he found a 1980 CX500 for sale in Lethbridge, Alta. The CX 500 wasn’t running, the wiring was a mess and the bike was dirty, looking like it was last ridden around the farmyard.

But that didn’t deter Klemenchuk. The Honda was complete and had relatively few miles on its odometer. He bought it and dragged it back to Calgary, where he immediately dug into the Eclectic Moto project.

“I patched up the wiring harness and cleaned up the carbs and got [the bike] to run,” Klemenchuk says. “It sounded healthy, so I moved forward from there.”

Moving forward meant working to a concept sketch Klemenchuk had created. One of the biggest changes to the stock design was the monoshock rear suspension based on a Ducati Monster shock absorber.

To make this modification work, Klemenchuk fabricated a bracket that attaches to the front of the swingarm to capture the eyelet of the Ducati shock. While he was working on the swingarm, he notched it to accept a wider 17 x 4.25-inch Warp 9 rear rim and a 160/60ZR17 Shinko 009 Raven tire. The Honda rear hub and brake were laced to the rim using short stainless-steel spokes sourced from Buchanan’s Spoke and Rim.

Meanwhile, the rear subframe was cut away from the Honda frame. To make the top shock mount, Klemenchuk cut brackets from 6-mm-thick aluminum plate and bolted them to the rear backbone. The ride height can be adjusted because a second set of shock mount holes were drilled in the mount. This mount also forms part of the seat and contains a 25-cm-wide x 6-cm-tall metal box that hides all of the electronic controls, including the motogadget m.unit blue.

A Cocktail of Front-End Parts

To get the correct geometry up front, Klemenchuk chose to build an “eclectic” fork consisting of a Honda CBR600RR’s top triple clamp, a Triumph bottom triple clamp, CBR600RR fork tubes and lowers, and BSA rubber gaiters. The new unit turns within a set of bearings sourced from All Balls Racing. Cognito Moto supplied a dual-disc front hub, which is laced to a matching 17 x 3.5-inch Warp 9 rim with stainless-steel spokes from Buchanan’s. The front wheel is shod with a 120/70ZR17 Shinko 009 Raven tire. Braking power comes from a set of Brembo 4-piston calipers squeezing a set of Honda CBR1000RR rotors.

Klemenchuk, who is a fan of the shape of the CX Deluxe gas tank, chose to keep that Honda part on this build, but he raised the rear mount to help level out the bottom. A long café racer-style seat was purchased from an online retailer. When the seat arrived, its cover was removed and thrown out. The foam, however, was cut down and a new cover was sewn, stitched with a diamond pattern.

Klemenchuk made his own seat skirt using a hemp and carbon fibre composite and constructed a unique rear LED light bar out of a hand-bent aluminum tube. One bolt at the back of the seat holds the entire tail section to the subframe. He used the same hemp/carbon fibre material to produce the front fender, heel protectors, kneepads, gauge housing and headlight ring. The headlight and front fender are held in place with aluminum tube mounts, similar to that for the rear light bar.

The Engine Checks Out

Then Klemenchuk moved his attention to the liquid-cooled, transverse-mounted 497 cc V-twin engine. He took the entire powerplant apart and inspected all internal components. Everything checked out, including the cylinder bores, which showed hardly any wear. Klemenchuk painted the main case flat black. In fact, there are four colours on the engine, including matte and gloss black and matte and gloss silver.

“I’m probably the only person who notices that detail,” Klemenchuk says with a laugh.

The engine was reassembled with new gaskets and a pair of VM34 Mikuni carbs on the intake stubs. Klemenchuk replaced the mechanical cooling fan with an electric unit from a Ducati and added custom shrouds. Ignition is fired by a mix of components, including a German-manufactured control unit, an Australian-made Hall sensor/stator to replace the points, Honda scooter CDI units and Ford coil packs – all connected using vintage Japanese-made brass bullet connectors.

“Keeping the vintage look of the wiring correct was important, even though it was totally modernized,” he says.

The bike’s header pipes are cut-down originals and, Klemenchuk says, he initially wanted to make his own tips, but instead capped the exhaust with a set of aftermarket mufflers into which he installed sets of baffles.

“It’s quite a complicated linkage,” Klemenchuk says of the result.

Clip-on bars are equipped with custom-made aluminum switchgear housings to integrate the momentary switches. Meanwhile, the levers are short aftermarket units meant to fit a motocross machine and are complemented by an aftermarket single-pull throttle and LED bar-end lighting. 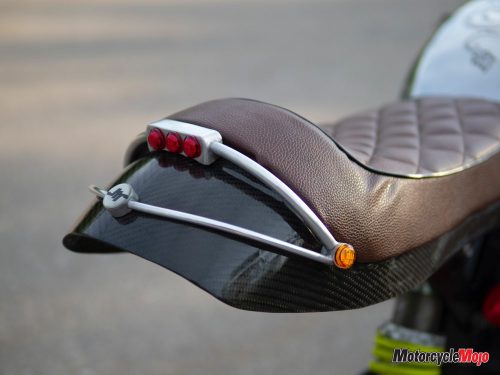 Klemenchuk chose not to paint the gas tank. Instead, he sanded it with progressively finer grits of paper until it gleamed. Next, he etched the top of the tank with the figure of a dragon. This, he explains, is a nod to the number of small components on Eclectic Moto that originated in China. There’s no clearcoat over the steel; Klemenchuk keeps the surface waxed to preserve the finish.

Klemenchuk also produced his own tank badges with the Eclectic Moto name, as well as the badges on the engine, fender mounts and aluminum dash. To make the badges, Klemenchuk fabricated aluminum panels to shape, etched in the graphic or text, then filled the etchings with paint and, on some, covered the tops with an epoxy lens.

Other finishes on the motorcycle include Endura industrial enamel; black on the frame and green on both the rear shock absorber spring and the front brake calipers. In the final assembly, Klemenchuk utilized all stainless-steel socket-head bolts to hold the motorcycle together.

“I’m not the world’s greatest rider,” Klemenchuk says, “But I do have a friend who’s quite an accomplished rider, and he’s taken Eclectic Moto for a good run. He says it handles like a vintage Ducati.

“I’m going to keep it,” Klemenchuk adds, “and I’ll just use it to ride out on short jaunts to Bragg Creek or perhaps a little farther into the mountains.”