An adventure (ADV) bike is nimble enough to handle the daily commute like a naked bike can, yet agile enough to manage twisty roads like a sport bike does – even better on bumpy Canadian roads. An ADV bike’s upright riding position, roomy ergonomics and moderate wind protection makes it almost as capable of clicking off kilometres as a Gold Wing. About the only place an ADV bike is out of its element is on a racetrack – although even there, with a capable rider on board, potential embarrassment looms for unsuspecting supersport riders. While an ADV bike can carry its own weight among any of those types of motorcycles, throw on a good set of off-road tires and it will leave all other styles behind when the going gets rough and dirty. An ADV bike is your best bet if you plan to travel the world.

And travel the world we have for this road test – at least partway around, to Marrakesh – to ride the 2020 Triumph Tiger 900. The three-day press ride included 200 kilometres of back roads from Marrakesh to Essaouira on Morocco’s Atlantic coast, then an off-road loop of about 160 km on a combination of hard-packed trails, rocks and sand, and finally a two-and-a-half hour highway ride back to Marrakesh. We experienced a bit of everything. 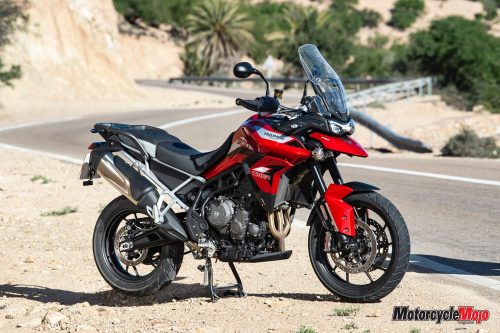 First, the obvious change: the engine. The Tiger’s inline triple has grown to 888 cc from 800 cc via a 4-mm larger bore, now at 78 mm, while stroke is unchanged, at 61.9 mm. There are new cams and connecting rods, revised intake ports, a new sump casting for improved ground clearance and a new T-Plane crankshaft. What’s that you say? A T-Plane crankshaft? If you look at what Yamaha has done with the R1 and its crossplane crank, you get an idea of what Triumph has done with the Tiger.

Instead of having the crank pins set 120 degrees apart like on a conventional triple, which places the ignition intervals 240 degrees apart with a 1-2-3 firing order, the T-Plane crank pins are set 90 degrees apart, which places the ignition intervals at 180, 270 and 270 degrees and in a 1-3-2 firing order. A reconfigured counterbalancer keeps vibration to a minimum. The most noticeable change is that the 900’s engine has a different sound. The new Tiger no longer has an inline-triple’s steady hum, but rather a syncopated beat closer to that of a V-twin.

Peak torque is up by 10 per cent to 64 ft-lb. Peak power is the same as before, at 94 hp, but there’s 12 per cent more power available throughout the mid-range, providing a broad, flat power band that is forceful yet easy to manage.

The tubular steel frame now has a removable aluminum subframe and passenger foot peg hangers – items that were welded onto the Tiger 800’s frame. These are significant changes that serious off-road riders will appreciate. The engine has been tilted forward by 6.8 degrees, and placed 42 mm lower in the frame – changes that alter weight bias and lower the centre of gravity. The air filter is apparently easier to access, something you’d take note of if you’re a current Tiger owner. The engine is also 2.5 kilos lighter than before, contributing to up to a five kg weight loss, depending on the model. 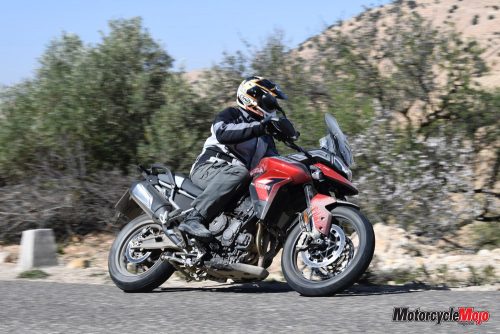 All models but the base 900 have a seven-inch, full-colour TFT screen controlled via illuminated handlebar switches; the base model has a five-inch screen. Depending on the bike model, you can use the TFT screen to select from up to six ride modes (more modes are available on the higher-spec models), adjust the suspension (GT Pro only) or configure individual parameters in Rider mode. The base model has basic traction control (TC) and ABS, while both of these rider aids are lean-sensitive and adjustable on all other models.

The screen is the central point of both Pro models’ Bluetooth-enabled connectivity. With Bluetooth, you can connect your smartphone, two headsets and a compatible GoPro camera (GoPro 5 or newer). Camera connectivity allows you limited control of its functions through the handlebar switches.

Installing the free My Triumph app onto your smartphone allows you to download routes and use your phone’s GPS to guide you (it will do this with data turned off) to a destination via turn-by-turn prompts in the TFT screen. A beta version of the My Triumph app we used during the test had a couple of development glitches, but aside from that the navigation worked fine.

All models have a 12-volt accessory outlet, and all but the base model get an under-seat USB port with a watertight phone compartment. The two Pro models get a quick-shifter that works the gearbox up and down, a feature that’s available as an option on the other models. LED lighting is standard throughout, and cruise control is standard on all but the base model. The windscreen is adjustable to five positions over a 50 mm range on all models. Raising and lowering it is a snap using the provided bar – just push forward to unlock, then raise or lower. Heated grips are standard on all GT and Rally models, while the Pro versions of those bikes also get independently controlled heated rider and passenger seats.

For the first day’s back road ride, I chose a Tiger 900 GT Pro. The bike’s seat and fuel tank have been narrowed between the knees despite the fuel tank holding a litre more fuel, at 20 litres. The handlebar has been moved rearward by 10 mm compared with the Tiger 800, which indeed provides a cosy, relaxed riding position. The seat is two-position adjustable (810/830 mm), but I found no need to raise it, as there is ample legroom. For riders with a short inseam, the 900 GT (not the Pro) is available with reduced suspension travel (151 mm versus 170 for the standard GT), which when combined with a low seat drops seat height to 760 mm.

For my ride, I selected Road mode, which provided smooth throttle response. Even in the most aggressive mode (Sport), the throttle is easily manageable, but it’s a bit tiresome in traffic. I fiddled with the ride modes often, especially to see the difference in the suspension settings. Only the rear suspension is affected by the ride modes, and it can also be adjusted independently of the modes. I used that feature to bump up the four-position rear preload to the second setting – for rider with passenger – which raised the rear and quickened corner entry in the twisties while adding a bit of cornering clearance.

Steering is well balanced and light, the bike is stable at speed and the suspension can be adjusted over a broad range – from plush to too firm – which is good. I put the adjustment somewhere in the middle, which provided a firm enough ride for an elevated pace without wallowing or returning a harsh ride. The suspension isn’t as sophisticated as on competing ADV bikes that feature fully adjustable electronic suspension adjustability, but the Tiger’s worked well enough that the manual adjustability of the fork is forgivable. The only kink in the handling was excessive nosedive when braking hard for tighter turns, but that’s a byproduct of the suspension’s long travel, which is what provided the excellent bump absorption, so that quirk too is forgivable. 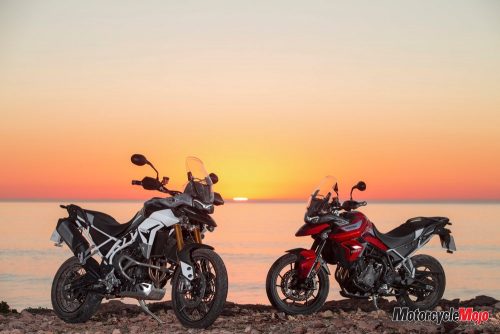 The next day we hit the dirt on the top-ranging Tiger 900 Rally Pro. The riding position is different, especially at the foot pegs, which are mounted farther back to facilitate stand-up riding. The handlebar also is pivoted upward for the same reason. For the day’s ride, the Rally’s OEM Bridgestone A41 tires were swapped out for knobby Pirelli Scorpion Rally tires, and pressures were set to the low 20s psi. The combination of knobby tires, low pressures and a 21-inch front wheel made the Rally Pro’s handling sluggish on the pavement. But when we hit dirt, those factors paid off, especially since the first thing we did was to ride onto some soft, loose sand – not the best way to shake off early-morning grogginess.

I kept the bike in Off-Road Pro mode (available on the Rally Pro only), which shuts off ABS, but more important, shuts off the TC for added control on loose surfaces. A 21-inch front wheel is a must for serious off-roading, and the Rally steers quite effectively in deep sand – as long as you don’t push it motocross-style into a berm, where the front tire just scrubs into the sand.

The real fun began on hard-packed and rocky paths sporadically peppered with random sandy curves to keep you alert. The Rally Pro kept a fast pace without overwhelming the suspension – or the rider, as it steered and braked with precision on dirt. The Rally Pro isn’t enduro-bike precise like the KTM 790 Adventure R is, but unless you’re riding at an expert-level pace, one bike won’t outrun the other. Both Tiger Pro models have a quick-shifter, and on the Rally it proves invaluable off-road, allowing clutchless gear changes while maintaining forward momentum. Triumph has introduced tubeless spoke wheels on the Rally, which makes puncture repair easier. The rims are made by Akront, and after hitting a big rock hard enough at enough speed to bottom the fork hard, I can attest that those rims are nearly indestructible.

There is one thing Triumph needs to work on: ride mode selection process. There are too many steps required to make a selection, including having to confirming your selection by pushing a separate button. And once you’re rolling, the two Off-Road modes grey out on the screen and cannot be selected. Also, if you do select one of the Off-Road modes, or turn either the traction control or ABS off in Rider mode, the bike will default to Road mode every time the ignition is switched back on. Other manufacturers’ ADV bikes can retain off-road modes; Triumph should be able to do the same, especially on the Rally Pro – it’s not the Rally Novice, after all.

On the final day, we hit the highway to return to Marrakesh. I chose a Rally Pro equipped with OEM tires. While it steers a bit slower than the GT, it’s road handling is still good enough that it can easily keep pace on winding roads. I set the cruise control and enjoyed the sights, and with the adjustable screen raised and the seat and grip heat on, the single-digit temperatures we encountered along the way were easily dismissed. The windscreen did produce some helmet buffeting at highway speeds, but not enough to prompt me to lower the windscreen. After three days in the saddle on the various bikes, the Rally Pro’s seat proved supportive and comfortable.

This extended ride helped me narrow down my choice to one favourite: the Tiger 900 Rally. At $17,300 it undercuts the Rally Pro by $2,500 – some of which could be used to add a couple of the Pro’s standard items, like the skid plate ($324) and the quick-shifter ($479). Aside from those items, the 900 Rally has all the standard features I find useful, as well as a premium suspension with the travel I’d need to handle off-road rides.