The V-Strom has always been a good motorcycle, and the redesigned 1050 is no different.

The Suzuki V-Strom, which has been around since 2002, has for the most part slipped under my radar. There’s nothing wrong with bike: it handles competently, has decent power and can do almost anything a rider asks of it – as long as it’s mostly kept on pavement. But for me, the V-Strom never really stood out as being an outstanding machine by adventure-bike standards. BMW’s big GS, on the other hand, has been around since Blondie’s Call Me tune was a No. 1 hit, and over the decades that bike built a reputation as the mother of all adventure bikes. KTM, meanwhile, specializes in off-road motorcycles and has numerous Dakar wins under its belt. Consequently, KTM’s Adventure models are renowned for their off-road prowess. Not far behind is the Honda Africa Twin, which, despite its more recent arrival into the adventure-bike genre, has already gained a reputation for tackling hard off-roading with ease while exhibiting exemplary roadworthiness. There are a couple of other noteworthy adventure bikes as well – and then, well, there was (to my eye, at least) the lowly Suzuki V-Strom.

Due for a Redesign 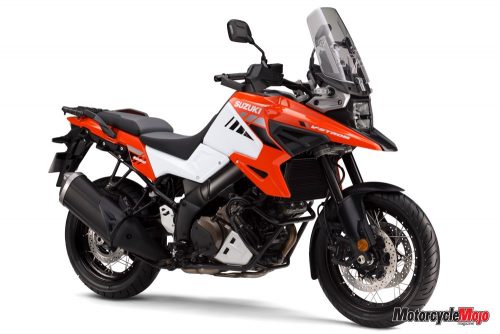 But there’s much more to the V-Strom than meets the eye. This year, Suzuki has given the V-Strom a substantial makeover, although that falls short of a complete redesign. Two models will still be available: the base V-Strom 1050A and the higher-spec V-Strom 1050XA. The latter model is the bike I went to Marbella, in the south of Spain, to ride.

The 1050XA comes equipped with a crash bar, hand guards, lower cowling, a centre stand, mounts for optional plastic saddlebags, a tool-free adjustable windscreen, a 12-volt socket under the passenger seat, an adjustable rider’s seat, LED turn signals and a more comprehensive electronics package compared with the base 1050A model. The 1050XA also has tubeless spoke wheels, as opposed to the 1050A’s cast wheels. A lightly accessorized 1050XA Adventure will also be available with dealer-installed aluminum panniers and top case.

Turns out that my initial impression of the V-Strom was a little off-base. For on-road performance and bang for the buck, the V-Strom 1050XA scores big. And after riding it, I discovered that there’s no reason someone should overlook this adventure bike – unless your intention is a serious off-road thrashing, in which case any of its aforementioned rivals may be a better choice. But if you pile on countless kilometres in a combination of sport riding, long-distance touring and commuting with occasional forays onto gravel roads, the 2020 V-Strom 1050XA’s comfortable riding position, modest weather protection and sport bike-like handling really does fit the bill.

Speaking of bills, the V-Strom 1050 has a new one. If you’ve been around motorcycles for the past three decades, you’ll find that V-Strom’s new beak strikes a familiar silhouette – but not the one you may think. While this overhanging protrusion is new to the V-Strom, it’s not new to Suzuki. When someone commented on social media how “everybody copies the BMW beak” after I’d posted a picture of the new V-Strom online, I had to point out that Suzuki was actually copying one of its own: the 1988 DR750S. Better known as DR Big, the DR750S predated the first duckbilled BMW by six years.

Also part of the makeover is LED lighting, including the headlight, taillight and (on the 1050XA) turn signals. A new two-piece seat replaces the former one-piece perch, and on the XA it is adjustable to two positions
(850 mm and 870 mm), although you’ll need some tools to do it. 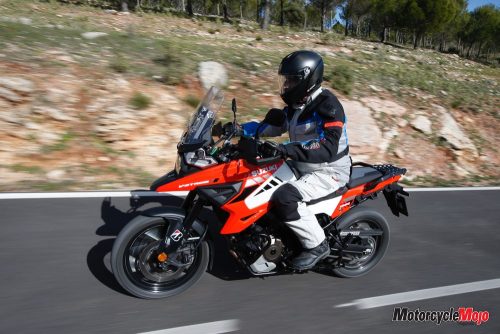 The frame, swingarm and chassis geometry are unchanged – why fix something if it isn’t broken? The suspension is mostly unchanged, returning with a fully adjustable, 43 mm inverted fork and a single shock adjustable for rebound damping and spring preload. Shock calibration has been altered with a slightly firmer spring and increased high-speed compression damping upon initial stroke. This actually resolves some of the harshness of the former model because the shock now rides higher in its stroke.

The V-Strom’s 1,037 cc, 90-degree V-twin has been around for ages, tracing its lineage to the 996 cc twin on the TL1000 sport bike. For 2020, the engine gets new cams, larger throttle-body bores (49 mm versus 45) and ride-by-wire throttle control in place of cables. A larger, single catalytic converter in the exhaust system replaces the previous model’s twin converters. These changes make the new model’s engine Euro 5-compliant while producing six hp more, at 105. Peak torque is down a scant half a foot-pound, to 74 ft-lb. To handle the added power, the radiator’s cooling capacity has been increased by 15 per cent, and there’s a liquid-cooled oil cooler behind the oil filter. Fuel consumption remains unchanged, with European specs claiming 4.9 L/100 km.

A Fresh Dose of Tech

The real technological advancements for 2020 are the new electronics. The V-Strom 1050XA comes standard with lean-sensing traction control (TC) and ABS, both of which are adjustable. The TC’s inertial measurement unit (IMU) is now a six-direction, three-axis unit in place of the five-axis unit on the previous model. This allows more precise traction control operation while enabling other electronic features, such as a hill-hold function and load- and slope-dependent ABS, which monitor brake pressure and deceleration rate and adjusts braking force accordingly. The new V-Strom also has Suzuki’s Drive Mode Selector (SDMS) throttle settings.

On the list of accessories is a five-volt USB port, conveniently located to the left of the instrument panel and useful for plugging in a GPS unit or charging a phone, although there’s no holder or case for the aforementioned devices. There’s also an under-seat 12-volt outlet to power other accessories. And for those long-distance Stromtroopers, the XA now features cruise control, with Set, Accelerate, Coast and Resume functions.

Firing up the new XA ’Strom produces a rich, deep V-twin rumble. The mechanical-assist/slipper clutch is light, and the gearbox shifts with short, precise jabs at the lever. Of the three SDMS settings – A, B and C – my default became B because it gave softer response than the borderline-abrupt A setting, but was livelier than C, which would be ideal in rain or on dirt. The V-Strom’s styling does a good job of disguising its sport-bike tendencies. This adventure bike carves corners like a sport bike, exhibits neutral steering through corners, and can transition through tight esses quickly with little effort on the handlebar. And to top it off, the bike exhibits rock-steady stability on the highway. 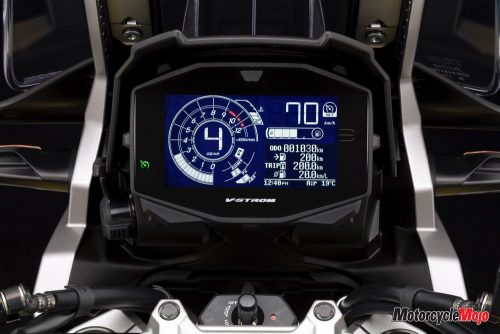 The engine does show its age in terms of output, though. Mid-range torque is more than adequate, providing a forceful punch between turns on twisty roads. However, the engine runs out of steam in the upper rev range, noticeable mostly when accelerating from higher speeds on the highway. A solo rider will likely never ask for more from this V-twin, but if loaded with a passenger and luggage, the engine’s output may fall a bit short.
The smooth Spanish pavement at the test venue didn’t do much to upset the ’Strom’s suspension, which feels street-bike firm without being harsh, at least in its standard settings. I felt no need to soften up the suspension settings, although that option is available. As is, the fork controlled brake dive admirably, allowing some relatively deep trail-braking into tighter turns.

I give Suzuki big props for the way the V-Strom’s ride modes, traction control and ABS settings can be selected. The three parameters – SDMS, TC or ABS – are always displayed on the digital instrument panel, so you don’t need to pull up any menus to find them. You can select your preference on the fly using a Mode button and a rocker switch on the left-hand switch pod. Just press the Mode button to highlight which parameter you wish to change, use the rocker switch to scroll to the selection you want and that’s it – as long as the throttle is closed, there’s no need for further confirmation. The ABS, which has two levels, must be selected while you’re at a stop and it cannot be turned off. The V-Strom gets extra points for retaining all of your selections after you switch off the ignition, even if you turn the TC off. No need to reconfigure the electronics after starting up again. The instrument panel screen does scratch quite easily, though.

Suzuki follows a couple of other bike makers, in that the V-Strom now includes a hill-hold function. This is a convenient rider aid, especially if you’re carrying a full load. When you stop on an uphill slope, the system automatically holds the rear brake for 30 seconds after the brakes are released, thus facilitating launching the bike on a slope.

So far on my ride, the V-Strom has proven to be a competent, well-rounded motorcycle. The new seat, however, is only so-so. While it is flat, level and wide, it’s perhaps too firm to keep your posterior from begging for a quick break after about an hour. The windscreen does a very good job of keeping wind off your upper body, although in its highest position, helmet buffeting is present but tolerable. The downside: the release lever used to adjust the windscreen is at the front, meaning the windscreen is not adjustable while riding (unlike on the V-Strom 1000 model).

For a bike in this price range, however, there are a couple of omissions on the 1050. The forgivable one is the lack of self-cancelling turn signals. The inexcusable one is the lack of standard heated grips, especially on the premium XA version of Suzuki’s big adventure bike, which is likely to see duty early in the season and be put away late.
All of these changes have driven up the price: the 2020 Suzuki V-Strom 1050A starts at $14,399 – up from $13,499; and the 1050XA starts at $16,099, up by $2,000. The well-equipped 1050XA is still thousands of dollars less than the base BMW R1250GS’s at $21,650,and the KTM Super Adventure S’s $20,199. However, the new V-Strom does come to within $400 of the Honda Africa Twin, which is the better choice if you prioritize off-road adventures.

Despite a couple of kinks, though, the 2020 V-Strom 1050XA has everything it takes to get the attention of prospective adventure bike buyers. After having ridden it, it certainly got mine.