This comment came from a guy I had just met at the campground I had checked into in Rasar, Wash., a few minutes before. He was pointing at me when he said it. Having seen me poring over my map at a picnic bench beside my heavily laden V-Strom and tent, the man closed in for a chat. I figured he wanted a few minutes of peace, having checked out where he wandered over from: his site had about a dozen screaming kids, blasting techno music and, inexplicably, dancing laser lights similar to those you might put outside your house at Christmas.

My new friend wanted to look at my bike and ask where I was going. Most of all, he wanted to know why I was alone on the Fourth of July. Before I could answer, his son Cooper came over and asked if he could sit on my bike. I obliged. I obliged again when a couple more kids also wanted to be lifted into the cockpit.

Then I explained why I was alone.

When you live on an island, most adventures begin with a ferry ride. In the case of Daniel, Rob and me, we live on Vancouver Island and had set aside five days to tour Washington state, beginning with a ride on Black Ball Ferry Line’s single-hull MV Coho, which runs between Victoria and Port Angeles, Wash. Juan de Fuca Strait can get pretty rowdy, so we lashed our bikes to the sides of the ferry shortly after riding into its gaping belly. This action completed the extent of our trip planning; from there, everything would be spontaneous, free and fun.

The lineup to access the famous Hurricane Ridge, a few minutes outside of Port Angeles, was not fun. Neither was the newly implemented $25-per-bike entrance fee, especially when low-slung clouds moved over the surrounding peaks like the bottoms of battleships, reducing visibility and eliminating the only reason anybody would ride up Hurricane Ridge.

Instead, we headed for Highway 112 to Neah Bay, the westernmost point of Washington state on the Olympic Peninsula, despite being advised against it by locals we had met in the parking lot of a Safeway grocery store. 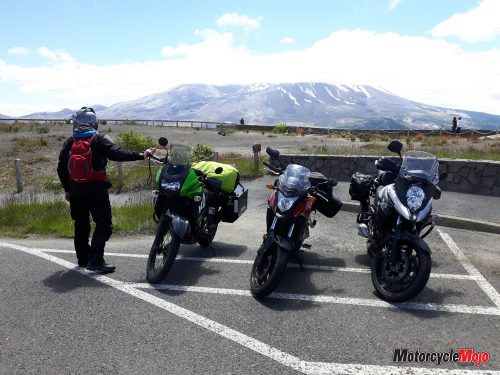 “Been a few washouts on that road. I’d be careful,” said the president of a local riders group. “Been at least four fatalities there already this year.”

We need not have worried. Hurricane hairpins, sweeping apexes and subtle berms – the engineer must have been a rider – means Hwy 112 was nothing short of a howl-fest that left us grinning ear-to-ear and exchanging high-fives once we were spit out at the Hwy. 113 junction.

Even the washout areas were gravel- and dirt-free, and the resulting heaved asphalt was well signed in most places. Leading the way, I dove my Suzuki into a beautifully cambered sweeping right, only to realize too late a washout-induced heave was there. With my suspension already preloaded, I absorbed the compression with my arms and legs, and, having nowhere else to go, a blast of air vacated my lungs. The bike took it like a pro and the tires remained stuck to the asphalt.

A couple of hours later, we stood overlooking Cape Flattery, the northwestern-most point of the contiguous U.S. Of course, this was a good time to compliment each other on our riding styles, choice of gear and virtually everything else. What else would you do at Cape Flattery on the first day of what was turning out to be a fun adventure? What we didn’t do was crack open an alcoholic beverage. Out of respect for the Makah First Nation, which has called this part of the Olympic Peninsula home for thousands of years, we refrained, as alcohol is not welcome.

Backtracking along Cape Loop and Cape Flattery roads, we made our way back to Sekiu, where we wound the day down at the By the Bay Café with a burger and a beer, and then camped by the ocean.

The Day the Earth Moved

The second day broke with perfect riding weather, and we backtracked down Hwy 112 to Hwy 113 and eventually to the famed Hwy 101. We checked out the resort town of Westport before pointing our headlights east, finding the Lewis and Clark campground as the sun began to set. For me, the next day held the most excitement, so I crawled into my tent with eager anticipation.

Mount St. Helens blew its top on May 18, 1980. Sizable earthquakes preceded the eruption in the days beforehand and geologists were monitoring the bulge in the mountain’s north side as magma from a deep reservoir within the Earth made its way to the peak. At 8:32 a.m. on a blue-sky morning – much like the one that lay before us as we packed up our bikes on our third day – Mt. St. Helens erupted, killing 57 people (including volcanologist Dave Johnston, who famously reported, “Vancouver! Vancouver! This is it!” moments before succumbing to the toxic gases and the blast wave).

The body count could have been worse. There had been extensive logging in the area at the time, and workers had been allowed into their base camp the day before to collect their belongings. Because the eruption happened on a Sunday, few people were in the vicinity. I was nine years old, and I recall standing in the middle of my suburban cul-de-sac in Calgary, staring at the sky and wondering why ash was falling. As the news of the eruption broke, the story and images of the event haunted me. How could something so massive and solid be destroyed so completely? Mount St. Helens was a key inspiration for me enrolling in geography and, later, in geology in university. 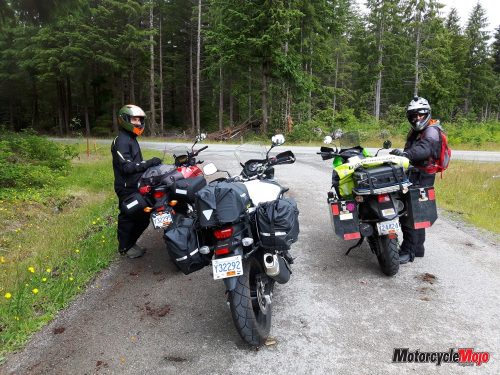 Almost 40 years later, we were ripping up Hwy 504 toward Mount St. Helens, I couldn’t help but feel the volcano had a similar impact on millions of others. The amount of money spent to build the almost 84 km of highway and bridge spans in the region must have been massive, but they allow thousands of people to access the Johnston Ridge Observatory and learn more about the largest geological explosion in U.S. history. As I stood on the observation deck of the facility, the power of the explosion became clear.

Massive mud- and rock slides crashed downward so violently they moved like a wave and slid up and over what is now Johnston Ridge, where the observatory now sits. The lateral blast killed countless mammals, birds, amphibians, reptiles and fish, and levelled almost 600 square kilometres. The resulting moonscape still exists today. Rock, ash and magma reached 2.5 km into the deep blue sky. As I toured the observatory, I soaked up all I could about the devastating explosion.

Riding back down the beautifully built Hwy 504, I felt unsettled. The ghosts of Mount St. Helens had always haunted me, and now I had come face to face with them for the first time. I had expected some kind of closure; instead, the power of the eruption consumed me once again. Daniel and Rob descended the smooth, winding road ahead of me at a brisk pace, seemingly eager to escape, but my mind was stuck in May 18, 1980. I didn’t want to leave.

That night we camped in a riverside campground in the Yakima Canyon, having followed up Mount St. Helens by riding Hwy 410 through Mount Rainier National Park, and I turned in early. The lazy river swished by almost silently, interrupted only by the occasional plop of a jumping fish, as the heat from the day and the engines of our motorcycles subsided into a cool calm. My unsettled feelings continued and, as the minutes passed by, I felt more and more like I wanted to be alone.

We were up early the next morning as the heat in the canyon built. The engines on Daniel’s KLR, Rob’s CB500X and my V-Strom throbbed with eagerness for the upcoming canyon road and the arid surroundings. My companions waved me to lead, so I revved the V-twin and turned left out of the parking lot, happy to be distracted by the attention that the road demanded.

Less than one minute up the road, Daniel and Rob were gone from my mirrors. I waited at the roadside for 10 minutes. Turns out, some sheep had caught their attention. Time after time during our ride north toward Winthrop, they disappeared from my mirrors. Unplanned gas stop; wasp in a jacket; traffic was too fast; somebody had to pee.
In the heat of the afternoon, I stood on my pegs and surveyed a river, thinking of a cool dip in the glacier-fed waters. I motioned to my friends to stop, but was told to keep going – so I did. Two minutes later, Daniel and Rob were once again gone from my mirrors. 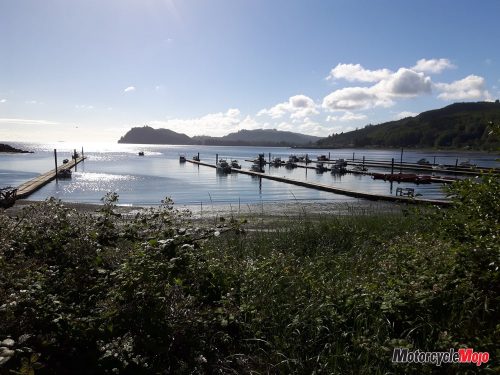 I twisted the throttle on my V-Strom and kept going. The North Cascades Highway is as good as it gets for scenery and is rated among the top 10 rides in the country. I snaked past the Diablo Dam and stunningly beautiful Liberty Bell Mountain as late afternoon turned to evening. I fuelled up in Marblemount and made my way to the tidy little town of Concrete. When I entered the Lone Star Saloon, every head in the house swivelled in my direction, taking in my orange-and-grey kit.

I sidled up to the bar and struck up a conversation with the bartender while ordering dinner. I had ditched my friends, I told her. Her expression revealed her disapproval. The guy at the end of the bar looked my way and shook his head. Point taken. Nevertheless, they steered me in the direction of the nearest campground, which was in Rasar. Under a barrage of Fourth of July fireworks exploding in every direction, I checked in.

Turning down an invitation to stop by my new friend’s campsite for a drink with his rowdy group, I said good night to him and Cooper and headed for the showers. Feeling rejuvenated, I climbed into my tent and considered my actions and the potential consequences. Were my friends worried? Were they pissed? I flipped off a short text to say I was safe.

As the light faded, the thundering booms slowed from their manic pace. One here; one there; one off in the distance. Finally, the campground was silent. I pulled my sleeping bag up around my shoulders and prepared for a deep sleep. As the day’s chaos slipped away – the traffic and crowds, my annoyance with my fellow riders, the rush of wind in my helmet, the percussive explosions – somewhere out there, high on a ridge, a lone coyote sang to the moon. It was the most beautiful sound.