There are many twisty roads in the Appalachian Mountains, and getting to the ones with reptilian names is as much fun as riding on them.

My first pass from Marion down the Back of the Dragon in Virginia was a cautious one. Not only were the multiple curves and switchbacks unfamiliar to me, but the persistent drizzle reduced traction and thick fog reduced visibility at these higher elevations. My ride certainly left no time for daydreaming. I used my GPS, zoomed in on the screen to predict the direction of the road and the severity of radius on the corners I could not see. The road itself was in very good condition and free of loose gravel, but the odd small branch brought down by the weather added to the excitement.

I was camping at the northern end of the Dragon’s Back near Tazewell, so I knew I’d be riding Highway 16 to Marion again – hopefully in drier conditions. So I decided to wait it out. Cavitt’s Creek Campground was new and clean, and camping on a primitive site cost US$10.50. Definitely worth it for the showers and laundry facilities – not to mention I was able to set up under a group pavilion and stay warm and dry while I watched the rain fall in sheets.

After two days and one good book, the sun rose in a beautiful morning – and I awoke to the sound of a visitor. Not four metres away, a young black bear was staring at me as he hung over the top of a blue garbage can. My first thought was “Where is Mama?” (His, not mine. Okay, maybe both.) But as soon as I reached for my camera (that’s what we do in the 21st century), he bolted. At any rate, I was now fully awake. 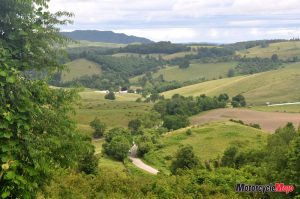 This is a deeply religious region of the country, and judging by all the church signs the Baptists and the Methodists have it pretty much sewn up. As I sat nursing a hot cup of morning coffee in a McDonalds, Christian contemporary music comprised the background music. As well, I noticed that all the patrons sitting at the three tables nearest to me paused to say grace over their hotcakes and sausage. (“To be fair,” I thought, “what food is in more need of divine blessing?”)

Each pass I made on Hwy 16 was drier and more familiar. I always marvel at the engineering that goes into these kinds of mountain roads, but I wished for more camber on many of the turns. Of course, the Virginia Department of Transportation’s choices may have been deliberate to force travellers like me to slow down.

Finally at Marion again, I continued on to Troutdale, where my GPS led me onto a single-lane gravel road that ran alongside a clear, gushing stream up a mountainside. I concentrated on correct standing techniques: squeeze the tank with your knees, steer by shifting your weight on the pegs, hold the handlebars loosely. Riding on this stretch wasn’t particularly difficult; I was feeling pretty good about my performance on the gravel – that is, until I met a Gold Wing coming the other way. Humility can be a bitter pill.

Moving Onto to the Snake

Back on narrow pavement, I began to enjoy the winding road as much as I had the Back of the Dragon. As I passed through a small community, I noticed the post office sign: “Lansing, NC.” I didn’t realize I had crossed into North Carolina as I followed Highways 194 and 88. Soon, however, I was in Tennessee and rolling in to Mountain City, which, I must say, was decidedly flat. But I pressed onward, and Hwy 421 quickly became the Snake. Again, I made my first pass with some caution. Like the Back of the Dragon, the Snake traverses two ridges with a valley in between – a nice layout because after the first set of switchbacks and hairpins, I had a moment to catch my breath before tackling Set No. 2.

The asphalt was pristine, and in comparison to Hwy 16, I found the curves of Hwy 421 were laid out in a better pattern, allowing me to get into the rhythm of flicking my bike from one side to the other as I wove through a forest of green ash, sycamore and honey locust. I was travelling during the dinner hour, but even so, traffic was light except for the two dozen other riders I encountered and not counting those who were congregated at the Shady Valley Country Store to fuel up, eat and admire one another’s machines.

Recalling the Tail of the Dragon

My mind kept attempting to compare these roads with the famed Tail of the Dragon, and I was trying to recall my experience riding there more than a decade ago. As a new rider at the time, the myriad hairpins, the extreme camber, the presence of a motorcycle resort and, of course, the Tree of Shame – where parts of wrecked motorcycles hung in a tree – wowed me.

I wondered how the route would appear to me now, given I had a respectable number of riding miles behind me. So, on a whim, I decided to find out. Heck, it was only three-and-a half hours to the south.

I arrived at the Dragon’s Tail well after dark – thus breaking one of my own rules – and was again grateful for the advance information offered by my GPS about each upcoming turn. Had I been a new rider travelling in the dark, it would have been a little too daunting.

With the perspective of experience, let me offer this: if it is open roads and escape from the masses that you seek, then look elsewhere. I believe the Tail of the Dragon is far and away the most monetized of the many great rides in the Appalachian Mountains. If, however, you enjoy socializing and rallies, you will love Deals Gap Resort with its row of motel rooms, camping, store and restaurant. You will meet riders from all over the continent. At least three photography companies set up each day on various corners during my ride, taking photos of every bike and uploading them to their websites from which you can purchase the ultimate selfie.

The road itself, I still found, was pretty amazing – one tight turn after another, some alternating so rapidly that the change in camber creates a diagonal “fold” in the road. To crest a fold while flicking my bike into another turn gave me the same sensation as skiing a slalom course or even moguls. I followed a bagger who scraped his floorboards on every corner. If he kept this up, I thought, he’d soon have simple pegs. 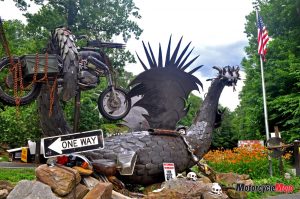 But the Dragon demands every second of your attention. As I came around a blind corner, there was a rider climbing out of the ditch that his Harley had just slid into. A few of us got him up and out, and the worst thing hurt was his pride. He was lucky. Had he lost traction on an outside turn, the drop is 70 degrees and a long way down. Farther on, I noticed two memorials to others who had not fared so well. In terms of fatalities, the Tail of the Dragon is consistently one of the most dangerous roads in America. Nevertheless, many groups have their pilgrimages, whether it is to Jerusalem, Mecca or Deals Gap.

Returning north, I followed the Foothills Parkway to Hwy 441 by traversing Great Smoky Mountains National Park, which has the dubious distinction of being the most visited of all the U.S.’s national parks. Twenty kilometres in, I came upon a protracted line of traffic moving at walking speed. My clutch hand eventually grew tired, so I pulled to the side of the road and spread out some lunch on the seat. As the parade filed past, I smiled and waved. At length, a ranger pulled alongside and rolled down her window.

“There’s a bear up ahead,” she said. “Momma is on one side of the road, and her cub is on the other. Just thought I’d warn you since you’re on a bike.”

I thanked her and joined the procession, finally squeezing past the spot where this artery was clotting: I have never seen so many cellphones in one place, all trained on a bear lounging on a ledge. Baby had made her way across the road to join her mother.

Beyond Cherokee, N.C., I followed Hwy 19 to 209. At Fines Creek, according to the road sign, Hwy 209 becomes “The Rattler: 290 curves in 24 miles.” Ferguson Supply and Cafe sold T-shirts, but that was it for commercialism and traffic at this point. I met maybe a dozen vehicles on that stretch and half of them were motorcycles. The route, which began as a cracked country road, soon morphed into perfect pavement – much of it brand-new. This stretch of road rises and falls over two remote mountain ridges, with a short section bordered by country homes and gravel that had been kicked up on the corners. I had to pick my line carefully, as well as watch – just in case – for children.

Arriving in Hot Springs, N.C., I discovered the town is a stop on the Appalachian Trail, which is the famed hiking route that rambles from Georgia to Maine. Outfitter shops, a hostel and restaurants are no doubt a welcome respite for burdened backpackers. 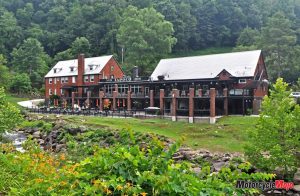 On a large wall map in Deals Gap, I had discovered one more reptile to hunt – the Python – on Hwy 58 and running through Virginia from Damascus and through Whitetop to just north of Mouth of Wilson on Hwy 16. I made a point of finding the Python as it fell within my general northward path. The entire 55 km of this stretch is a terrific collection of twisties and switchbacks that are in excellent condition, but the route was so little commercialized that I didn’t even see a sign identifying it as the Python. But it certainly deserved the designation.

At Comers Creek Road, off Hwy 16, I turned northwest and followed a gravel lane for four kilometres to where – thanks to the iOverlander app – I found free, secluded camping by a babbling stream in a grove of thriving rhododendrons, the very flowering tree I tried unsuccessfully to grow in my gardens at home.

Lying in my bivy, I looked up through the trees to a swath of the cosmos. I began to reflect on the outstanding riding I had been enjoying in the region, then suddenly I hit upon a cost-saving measure for the states of Tennessee, North Carolina, Virginia and West Virginia: rather than the million reiterative road signs warning of upcoming curves, each state should simply post the following under their welcome signs: “Look, you are entering Appalachia. Just assume the road will be squiggly. If a straight stretch is coming up, we’ll let you know.”

I also decided I’d gotten more mileage out of my tires on this trip because I was so seldom on the centre strip; I was using all the tire. That said, I probably spent those savings on fuel and asbestos, what with the hard braking and accelerating in all those great corners. Perhaps these thoughts were musings of a man who spends too much time alone, but my one inescapable conclusion was that I’d seldom had as much fun as I did tracking down these routes. To mangle a phrase from Appalachian native Robert Frost: “One could do worse than be a wrangler of reptiles.”