Long-term comfort is more about ergonomics and not necessarily about seat construction and foam density.

Almost a year ago – for the December issue of this fine tome, in fact – I had something of a revelation. After years of suffering through the numbest of butts on my various V-Stroms – and trying remedies varying from different seats to Moto-Skiveez padded riding shorts – I finally, accidentally actually, stumbled on the possibility that the true determinant of seat comfort was not seat shape or foam density but rather seating position.

I had been testing various seats – Shad, Sargent, Seat Concepts and Luimoto – when I got sidelined by a project with fully adjustable (height and longitudinally) foot pegs and a set of similarly height- and reach-adjustable bar risers. What was astonishing – or maybe I’m just dull – was that while, duh, my back ached less as bars and peg position suited me more, all the seats I had been considering as abject failures suddenly became palatable. Thus did I come to the conclusion that where you sit on your motorcycle is more important than what you are sitting on. Vexing oneself over whether a Corbin’s foam is too firm or if a Russell Day Long’s wings will offer tushie salvation is a waste of time if your hindquarters aren’t in their happy place. 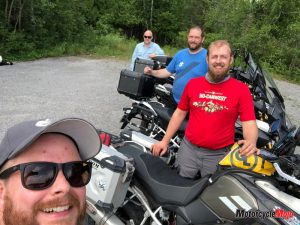 But theory is mere conjecture until put into practice. So Motorcycle Mojo performed the first – as far as I know – comprehensive multi-rider, multi-bike seat test by collecting three fellow Stromtroopers all with (semi) identical bikes for a back-to-back test of four seats built for the same bike. Most important, all four riders were of different sizes. Mike W., a transcontinental rider, was 5’8” and 180 pounds. At the other end of the spectrum, Mike T. was our heavyweight, standing 6’3” and tipping the scales at 280. In between, Dan K. was 5’11”, while I am 5’10” – and seemingly shrinking – filling in the ranks of medium-sized riders. In other words, we had a fair representation, if not quite a full spectrum, of the people likely to ride a full-sized adventure bike. (Anyone shorter than Mike W.’s 5’8” is probably not riding an ADV bike or is on the lookout for a “low” seat, which is not part of this discussion.)

The seats being tested – again, the Shad, Sargent, Seat Concepts and Luimoto – ran the gamut of both shape and firmness. The Sargent sported the densest foam, while the Seat Concepts was ordered with the company’s softest formulation. In between was the Shad, with multiple densities of open-cell foam, not to mention some 3-D mesh added for further cushioning. Luimoto, a British Columbia company renowned for its (dare we say “artistic”?) seat covers, simply added a piece of “Gold” gel into the stock seat’s padding. 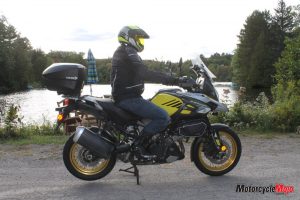 More important – at least, for the purposes of this particular seat test – was that the Sargent’s sweet spot stretched out the rider the most, bum placed the farthest away from the handlebars. At the opposite end of the spectrum, the Seat Concepts placed backsides closest to the handlebars, making for a short reach to the controls. In between, the Shad was closer to the Seat Concepts…