As days turned to weeks of monotonous riding in Central America, Nicaragua threw the author a few twists that made for a memorable ride.

Stare at any map long enough, and a visual trick can occur between the countries therein and the traveller. Take Central America. After six weeks of folding and refolding my map, I began to see in the narrow, curving strip of land a tired, withered limb. Guatemala was the thigh, Honduras the meat on El Salvador’s femur, and Costa Rica the bony shin. At the southern end, the skinny foot of the Panamanian isthmus, wasted almost to nothing, barely manages a toehold on Colombia.

This imaginary image came to me during a stop in the hot and dusty uplands of Nicaragua. Long days in the saddle through Central America had become a monotonous, hypnotic cycle. 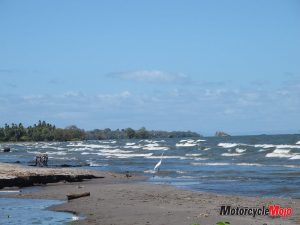 Each small town dotting the landscape had begun to blend seamlessly into the next. Every time I entered yet another collection of squat cement houses, “I’ve been here before” easily came to mind. I felt I’d eaten enough pig’s head stew, sweated through enough flat desert and waved away enough peddlers.

Riding inattentively, my memories had begun to slip. This was a case of the travel doldrums, the worst of all travelling illnesses; under its haze, everything begins to fuse into one ill-defined moment and distinguishing one event from the next becomes almost impossible. It was already happening to me: I had been in Honduras the week before, but what did I remember of it? There was that bar – no, wait, that was in Guatemala. And that back road with the banana palms – perhaps that was El Salvador? I needed a change of scene to refocus my mind; to plant me in the present.

Nicaragua; a country blessed with topographical variety that its neighbours lack, helped. Here, the Pan-American Highway is squeezed onto the narrow tendon of land along the Pacific as the land is riven in two by the behemoth of Lake Cocibolca. On the shrunken leg of my map, I decided this was the hough, the soft indentation at the back of the knee, where a well-directed knock will crumple an unsuspecting person.

The knock, when it came, arrived as a powerful gust. The easterlies blowing off Lake Cocibolca (also known as Lake Nicaragua) were strong enough to force me to correct my sloppy riding. The cool breeze lifted a corner of the humid blanket weighing me down. Enticed, I turned at a sign directing me to the lakeshore.

Cocibolca is one of the epic lakes of the Americas. South of the Great Lakes, there is almost nothing like it. Cocibolca is twice the size of Utah’s Great Salt Lake and covers an area equivalent to Bolivia’s Lake Titicaca, which is South America’s only sizable body of water. There is certainly nothing comparable to Cocibolca in Central America – Guatemala’s beautiful Lake Atitlan is only a speck in comparison.

Of Spanish Gold and Dictators 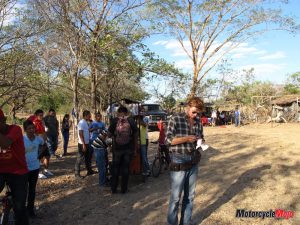 Despite Cocibolca no longer drawing international attention, the lake’s size and access to the Caribbean once made it a common destination for pirates and buccaneers, who made frequent trips up the San Juan River to sack colonial Spanish cities for their gold.

The lakeside city of Granada, the first colonial city on the American mainland and Central America’s main…