The author, a self-professed military history buff, experienced this historic war zone first-hand while riding some amazing mountain roads in the backcountry of the Balkan Peninsula.

The savage and bloody war in Bosnia ended only 25 years ago. Tens of thousands of Canadian Forces personnel served in the Balkan republics in the early 1990s, trying to make and keep peace as Yugoslavia fell apart. Twenty-three Canadians lost their lives in the line of duty. From the ashes of the old Yugoslavia, the Balkan states of Croatia, Montenegro, and Bosnia and Herzegovina arose. Yet, today that region, torn apart by a most vicious war, offers some of the best motorcycling roads in the world.

Arriving in Split, Croatia, I had time to tour that old city, most of which was spared the ravages of that terrible conflict, although there was an exceptional influx of more than 45,000 war refugees in 1992. However, Split has seen successive invasions involving the Greeks, Romans, Venetians, Germans, French, English and, more recently, hordes of tourists.

I visited the famous Diocletian’s Palace, toured some museums and managed a coastal hike before meeting up with my motorcycle group, with whom I would ride the Adriatic region for the next nine days. I met a McDonald’s cartel; the three of them collectively owned 33 McDonald’s franchises in Upstate New York. Including some family members and various hangers-on from Lebanon, Austria, Germany and Canada, our group comprised 14 intrepid travellers on 12 adventure bikes. (My ride was a BMW F750GS.) The BMWs, Ducatis and a Suzuki were provided by Edelweiss Tours, along with two motorcycle guides (one of whom had lived in Croatia and knew its dark secrets and, best of all, its hidden roads) and a chase van, which transported our luggage from hotel to hotel. What a posh way to travel by motorcycle in unfamiliar lands. 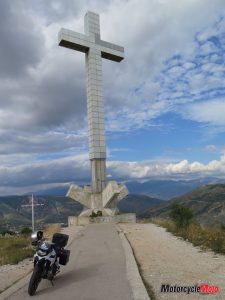 We headed south on a constantly winding coastal road, hugging steep cliffs to our left and sheer drops to the unnaturally blue Adriatic Sea always visible to our right. After a detour into the mountains to discover the beautiful Cetina River Gorge, we took a 45-minute ferry ride to the island of Hvar. We rode its main route, hugging the narrow mountain crest descending on both sides to the sea below on the way to the town of Hvar at the other end of the island.

The road was of very unusual construction: it was a raised paved path, about three-and-half metres wide with absolutely no shoulders and drops of one-half to three metres on both sides. Without a straight stretch for more than 50 km, there was no room for error.

An evening in Hvar, with the town overshadowed by its walls and a castle on the mountain, was an ideal setting for our first night out. The next morning, on our way to Dubrovnik, we backtracked along the same trail, but had different views of the Adriatic as seen from both sides of the high road that traverses the narrow island. We had to detour onto small roads through mountain passes to bypass a multi-vehicle (with fatalities) accident on the coastal road. That adventure on small country lanes turned out to be our first real off-piste riding experience of the trip. 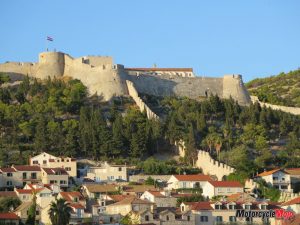 The siege of Dubrovnik (a blockade by land and sea beginning in 1991, followed by bombardment) by the invading Yugoslav People’s Army against the Croatian forces defending the city provoked international condemnation. Much of the old town, a UNESCO World Heritage site, was destroyed during the bombardment. More recently, the city, dubbed the King’s Landing on the small…