She abandoned me in Bolivia.

In Uyuni, Bolivia, my girlfriend left. Here, on the edge of the salt flat, where an infinite sky and a featureless plain combine to skew perspective and drive photographers mad, Elle West simply rode away on her BMW F700GS.

“Well, I guess I’m never going to see her again,” I thought.

I can’t complain, I suppose. We had a good run, riding our motorcycles all the way from Canada to South America. But now she’s gone. I can’t believe she left me. Or did I leave her?

Anyway, let’s not split hairs. I’ll just sit here in this restaurant and have some peace and quiet. Yeah. I’m going to have a beer. In fact, you know what? There’s a hostel just around the corner. I could leave my motorcycle and walk. I think I’ll have two.

The last thing I heard from her was a bunch of sniping over the intercom. I was doing it too. I can admit that. But, when I finally parked my KLR 650 in front of this restaurant and she continued rolling on, her voice fading out with the radio signal, I found the sudden silence deeply satisfying. 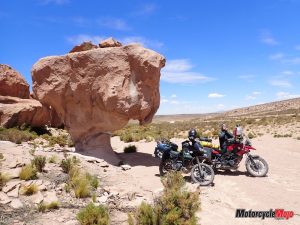 To be fair, Bolivia had not been kind to Elle right from the start. I guess maybe that was catching up with her now.

Or maybe she was still recovering from an illness that had flattened her in Peru. Just the other day, in the middle of nowhere, Elle had splayed out on the verge of a fuelling station in Peru as she fought off nausea and a spinning head.

“I almost blacked out while riding just now,” she said at the time.

I sat with her in silence then. That kind of illness can be fatal for a rider. Yet, we had tarried in Peru and now the paperwork for our motorcycles would soon expire. If we left Peru the next day, we could do so legally, thus sparing ourselves the inconvenience of having our machines permanently impounded. If not – oh, well –we would have to walk into Bolivia.

Of course, Elle didn’t need any such reminder. She lay there in the grass on the side of the road and I let her be. In her own time, she would rise. After that, I would let her set the pace. What more could I do? 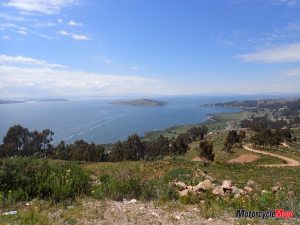 Her fever broke that night and in the morning – still weak, but smiling – Elle was up for a tour of the floating human-built islands of Lake Titicaca. It was a chancy side trip, given our paperwork deadline, but we managed the tour, got back to our motorcycles and crossed into Bolivia, all in the span of a single day.
With fresh Bolivian paperwork, we hit the road again in the morning and crossed the border.

Someone had mentioned that if we took the road from Copacabana to La Paz, we would encounter an “interesting” ferry crossing en route. And so we did. A dozen rickety barges, all lined up on the bank of a narrow channel bisecting Lake Titicaca, came into view…