There’s always something special about your first time.

Having completed the ambitious restoration of a 1966 11-window Volkswagen Transporter bus and while working on a complete rebuild of a 1969 Chevelle, Matt Miceli of Calgary landed a motorcycle project.

“I wasn’t seriously thinking about buying and building a café racer,” Miceli says, “but it was something that had been floating around in my mind.”

When a co-worker mentioned having a 1982 Kawasaki KZ750 stored away in anticipation of building a custom bike, Miceli was interested. 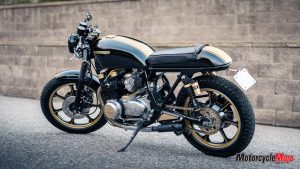 “He wanted to build it, but didn’t have the tools or the skills to tackle such a project.” Miceli says. “When I offered to buy [the bike], he really had to think about selling it, and even toyed with the idea of having me build it for him.”

But that didn’t happen. Instead, Miceli worked out a deal for the KZ750, which was in tired original condition complete with its Blackfoot Motorcycle dealer decal on the side cover. Although the motorcycle hadn’t run for a few years, it was complete and the seller had added several hundred kilometres to the odometer before parking the bike. As a result of the KZ750 sitting idle, its battery was dead – its only major flaw. After transporting the KZ750 home, it was pushed to one side of Miceli’s garage as he worked to complete the Chevelle.

While wrapping up that project, Miceli immersed himself in bike-building ideas, researching café racer machines online and watching YouTube videos.
“That’s part of the journey,” says Miceli, philosophizing about his desire to create a custom ride. “I was trying to get an eye for what I was looking for, and remember listening to a builder talk about how he looks at a bike from every angle before formulating a plan. I knew I wanted to create a straight line along the bottom of the gas tank back to the end of the tail section – that, and I just wanted to clean up some of the clutter.” 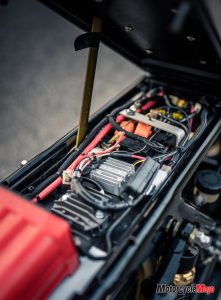 Have we mentioned yet this was Miceli’s first motorcycle project? He rode dirt bikes as a teenager and holds a motorcycle licence, at one time owning a Ducati Monster. But he’d never done a ground-up custom motorcycle build.

Cars, yes. That’s because he grew up in Burnaby, B.C., where his dad, Joe, owned an autobody shop. Since Matt Miceli was 11 years old, he says, he’d been working with sheet metal and had long since learned many of the nuances of prepping panels and painting. But after Miceli’s dad sold the property where they worked on cars – the son’s last build there was a 1969 Mach I Mustang – Miceli no longer had a place to build or store a vehicle. Once the…