Where dreamy motorcycles go to retire.

The mountain passes between Golden and Revelstoke on the Trans-Canada Highway in B.C. were soaked by heavy rain and clouds obscured the mountain peaks. Snow lay in chutes down to road level, even in July. The temperature was in the single digits. 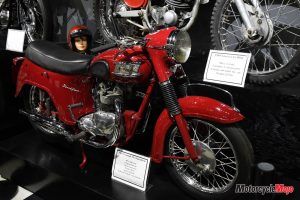 The greenery on either side of me was incredibly lush and vivid, seemingly almost illuminated by the rain, and the occasional river rushed under the roadway, with many waterfalls exploding down the mountainsides. I hadn’t realized how many shades of green there are in Nature. I’d ridden through worse weather, but perhaps not among more beautiful scenery. I finally made it to Revelstoke, which lay along my great circle route originating in Vancouver. And then the road west of Revelstoke was washed out and I was stuck. But that’s not what this story is about. There was a specific reason I was going through all of this. I had to get to Sorrento, B.C.

Mark Lane had a dream. By the time he was 20-years-old, he had bought and sold more than 100 motorcycles with his dad. Mark looked upon them as works of art, not simply as machines. He could stare at them for hours. Early in his career, he even worked at a couple of dealerships. But after 25 years in the reforestation business, it was finally time to make his dream a reality. That wasn’t easy, but after about two years of hard work and dedication, Dreamcycle Motorcycle Museum opened in May 2012 in Sorrento, just west of Salmon Arm.

Not All Bikes Need Restoring

“I have about 150 bikes, and each one has a story,” says the affable Mark, as he gives me a private tour around the museum, including the shop – where he does restoration work – and his parts room. “Some bikes are restored; some are not. You might not want to restore an original barn find.” He certainly has all the equipment and talent needed to restore a bike. His shop is well equipped and he has a few bikes in various stages of restoration sitting on lifts.
As we walk through the museum, Mark points out bikes of particular interest – although, to be honest, they’re all of interest to me.