Taking in the epic scenery of the Rocky Mountains and the Columbia Valley one tag at a time.

Every year, I get the call from my friend Trent Schumann. As usual, he’ll ask if I’m going to make it to that year’s WANDR rally. I neglect to answer, knowing that I won’t be able to make it once again. That was, until 2020 happened and my plans to explore India were kiboshed, thus freeing up my calendar to finally attend the WANDR rally for the first time.

The WANDR event began in 2018 and ran out of Invermere, B.C.. The event instantly gained a loyal following of both adventure addicts and recreational weekend warriors. Riders explore the scenic riding area while gathering QuestPoints. Trent and Daan Stehouwer started WANDR with the goal of providing a way to not only bring the dual-sport community together, but to provide a good outlet for riders to explore the wilderness without the daunting fear of being alone in the great unknown.

The event offers a non-intimidating environment to immerse yourself in Nature while challenging yourself and your riding skills. In addition, Trent wanted to improve the community, as he noticed that almost-new bikes often were being sold on buy-and-sell websites because the riders didn’t have the friends to ride with, time to get out there or the knowledge of where to go in their area. 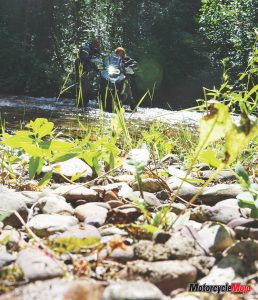 The two-day Invermere WANDR event caters to riders of all skill and adventure levels to showcase some of the most epic mountain landscapes in B.C. In the past, the rally has been four days long, and clinics and rides are on offer before the actual rally.

I had decided to ride a BMW R1250GS in the rally. I had it as a long-term test bike for the summer and although I had done some small trips on it, one of the main events I was prepping to ride it in was the WANDR event. I didn’t have a team, but that was okay; Trent assured me he’d find me someone to ride with.
However, there was one big problem. With the ever-so-current issue of Covid-19, getting accessories for the new GS were turning into an ordeal over the entire summer. One accessory in particular that I needed was engine guards. I knew what I was risking by taking the bike to a navigational mountain rally without engine protection, but I also knew the bike was more than capable.

I rolled into Invermere on the night before registration as the sun was setting. Trent had told me I was to be paired up with Pavel Abraham, a rider new to the adventure scene and looking to get out for some moderate trail riding. I was excited for the first day of the rally to begin and happy to be paired with someone who wasn’t looking to do the hardest riding but would likely be a good partner for the vulnerable 1250GS and me.

Because of Covid-19 restrictions, there wouldn’t be any camping at the WANDR headquarters, so I was camping in Radium, about 15 minutes up the road. Rain fell that night, which meant there would be little dust and good visibility for the ride.

I left my campsite in the morning excited to hit the road, with only a touch of nerves about the potential to drop the bike, which didn’t have engine guards…