Sometimes lessons from the past and a motorcycle are all you need to move forward.

Motorcycling traditionally has been about experiencing freedom. And, personally, I’ve found some of my greatest contentment on two wheels. But when cresting a hill in southern Virginia – locals call it the Wilderness – I met a brand-new adventure bike with all the farkles that was travelling toward me. And I felt a twinge. A tiny surge of desire that began to grow into a perverse wish that my 2006 Suzuki V-Strom, with all its kilometres, would kick so that I “had” to upgrade. I couldn’t justify the purchase, but if my old motorcycle died…

However, I was soon distracted by a sign for Monticello on the outskirts of Charlottesville, Va. Monticello was the stately home of the nation’s third president and, as I stepped onto the property’s expansive lawn under shady locust trees, I was welcomed by Thomas Jefferson himself. (I suspect he may have been an actor.) He proceeded to engage us, his guests, in conversation ranging from the workings of his 2,000-hectare plantation to his philosophical and political views. He was so convincing that I had to remind myself what year it was.

As I wandered the grounds, other tour guides addressed the conflict between Jefferson’s Declaration of Independence – which proclaims that “all men are created equal” – and the fact that he owned more than 600 slaves. I was heartened by the guides’ unflinching treatment of the subject, given the enormous status held by this U.S. president. They were also quick to emphasize that the dream of the Declaration has yet to be fully realized, even now – and that we all still have a responsibility to uphold that proclamation.

A Journey Into the Past 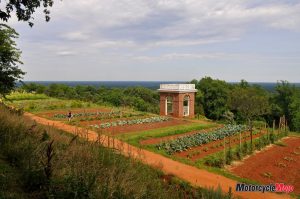 Jefferson’s home was my first stop on the Journey Through Hallowed Ground, a National Scenic Byway connecting a series of sites from Virginia to Pennsylvania that were monumentally important in U.S. history. As I followed this route, my window into the complexity that is the U.S. was about to be opened very wide.
The history also got very personal. After spending the night in a KOA campground, I met Michael, a retired veteran who had served in Vietnam and Guam; although Michael is legally blind as a result of having been exposed to Agent Orange, he does not qualify for enough VA support to afford decent housing and lives in a Coleman tent in the park.

Michael made me coffee and we talked for a good part of the morning. While he had reason to be bitter, he has turned his anger into activism and works at drawing attention to the staggering suicide rate among war veterans. He was kind and soft-spoken, and to my surprise, very interested in me and my story. For my part, I was struck by the disconnect between the reverence with which Americans view their military men and women, and how they aren’t supported when they return from service. Another arena in which more work needed to be done.

After touring neighbouring Montpelier, the home of James Madison (fourth president and author of the U.S. Constitution), I was soon back riding on…