They say that if life gives you lemons, make a whisky sour. Or you could buy a V-Strom.

Strange how unexpected events can change the course of our lives, creating chaos and, in turn, influencing our decisions moving forward.

In June 2017, such an event occurred in my life. I was riding my motorcycle to work early one morning and had the right of way to continue through an intersection on a green light. An individual travelling toward me made a left turn into me and my life changed in that moment –man and machine separated, which led to my injuries and a written-off motorcycle.

I suffered numerous abrasions, a torn meniscus and a shoulder dislocation that has required two surgeries. My life’s course took a new direction involving hospital visits, lawyers, insurance companies, and occupational and physical therapy. Not to mention the personal, psychological, professional and social toll that go along with that. These challenges continue, and my effort to get back to a somewhat normal life continue three years later.

To Ride or Not to Ride? 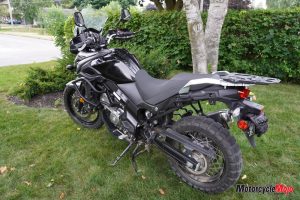 As I began to pick up the pieces from this event – literally and figuratively – and move forward on my new life path, part of my psychological analysis was to assess whether I would be able to ride a motorcycle again. With continued physiotherapy and healing, I eventually felt I would be able to ride, albeit in a different capacity.

My motorcycle at the time of the accident was a 2015 Kawasaki KLR 650 – which I jokingly called “My poor man’s ADV bike.” I loved that bike, which was very versatile and I could do many things on it. Single-track trails and double-track cart paths could be explored, servicing the bike was quite simple and, as any faithful owner knows, there are many upgrades and add-ons for this bike. Unfortunately, my faithful steed suffered a mortal blow in my accident, but it still protected my left leg – the point of impact – from extensive damage. RIP, my friend.

There were many repercussions of the accident, including the insurance compensation for the loss of my motorcycle. Hmmm. What to do? Should I get another KLR? They are cheap to buy and there are many used ones available. (I bought mine new.) Do I buy a street bike of some sort, or perhaps a naked scrambler or an adventure-touring model?

The Type of Bike is Important

One constant is that I like to explore, I enjoy riding the twisties and I have an affinity for gravel roads. Another KLR would be fine, but, as I gave it more thought, I concluded that my single-track off-road riding days were over. I also longed for a multi-cylinder powerplant instead of the KLR’s single cylinder, which had the tendency to be quite “vibey” at higher speeds. My budget was modest, so anything like a BMW GS or a Triumph Tiger was not in the cards.

In the past, I had ridden with Suzuki V-Strom owners and they appeared to be very happy with their bikes. I set out to educate myself about V-Stroms and their capabilities. The 650XT was redesigned in 2017 to mimic the 1000 in style, and the look appealed to me. (I was never a fan of the pre-2017 designs.) The V-Strom had more pros than cons when I stacked it up against other bikes in its category. Numerous parts of the 650 had been upgraded versus the model’s predecessors, including new cams and resin-coated pistons that produce more low to mid-range power. Perfect for off-road adventures, I thought.

A local dealer had a 650XT on the floor in the colour and with the styling I was looking for. The floor model was Suzuki’s slightly more adventure-oriented offering, which I wanted. This V-Strom’s aluminum rims and stainless-steel wire spokes, wheels designed for tubeless tires, were what appealed to me the most. The other add-on items, such as the plastic hand guards and cowl engine protector, were marginal at best and I doubt they would have withstood much abuse when the pavement ended.

A New Bike to Play On 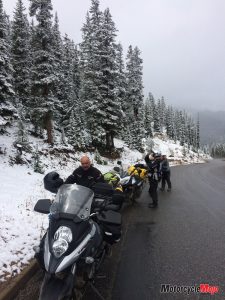 Finally, I pulled the trigger and purchased the bike. I negotiated a deal just south of $10,000 before taxes. A fair price for a motorcycle with traction control and ABS, in my opinion. Compared with the Spartan features of my previous bike, I was riding in the lap of luxury – and for only $3,000 more than a new KLR would cost. Riding my V-Strom felt different from my previous ride, as was listening to the V-twin under me instead of the single thumper that I was accustomed to.

My KLR had crash bars and a skid plate for off-road protection. The V-Strom required the same, along with proper tires, hand guards, heated grips, centre stand, rear luggage rack and foot pegs to make it more off-road-worthy. As many motorcycle owners know, sourcing new upgrades and parts for your bike is always fun. The challenge is in knowing when to stop – and your bank account usually determines that.

My first order of business was to purchase a skid plate and crash bars, given the V-Strom’s exhaust and oil filter were very exposed and subject to damage. I had mounted Outback Motortek’s crash bar/skid plate combo package onto my previous bike, and I did that combo on my new V-Strom too, along with a centre stand (mandatory, in my view). I can attest that each of those components is of high quality and durability. As a bonus, Outback Motortek is a Canadian manufacturer and you can purchase its products through Dualsport Plus, another Canadian supplier. Supporting domestic businesses when possible is nice.

When the Rubber Hit the Road

Next… tires. Many a bike owner, including myself, has been overwhelmed by tire options, which can lead you down a rabbit hole into oblivion. My V-Strom came with factory-mounted Bridgestone Battlax Adventure tires. Adventure these tires were not, as they were for pavement only. When I finally emerged, exhausted from my tire research mission, I settled on a pair of Shinko 804/805 tires. These tires, considered 60% off-road and 40% on-road; the rear tire has a very aggressive and banded lug and the front is a typical knobby, albeit sculpted in a specific pattern by Shinko. These tires also were very competitively priced.
Rounding out the mods on my V-Strom, I added a set of Barkbuster Storm hand guards, Oxford Premium Adventure heated grips, a no-name set of serrated steel foot pegs sourced from eBay and an SW-Motech rear luggage rack.

In September 2017, some friends and I hauled our bikes to Denver for an eight-day ADV trip, which we had planned long before my accident. I considered cancelling the trip due to the demanding off-road itinerary and my gimpy shoulder. Ultimately, we decided to alter our plan and reduce the number of mountain pass roads so I would not be a liability for everyone else. This trip would be the first test for my new V-Strom.

With our panniers packed, navigational devices ready and a healthy dose of excitement, our route would take us from Denver and south past Pikes Peak to Pueblo. Then we rode southwest to Chama, N.M., and northwest to Durango, Colo. From there, we headed due north through the state to Silverton and Montrose, then northwest to Kremmling and back to Denver.

We covered approximately 2,000 km of mixed gravel roads and secondary highways, John Denver singing Rocky Mountain High in the back of my mind. We experienced varied conditions, including rain, high winds and tumbleweeds in the lower plains. At an altitude of 3,600 metres, we endured 3 C temperatures with snow and salt trucks on the road. However, we had our fair share of nice sunny days and warm temperatures, which made for a well-rounded adventure.

The trip provided a perfect scenario of varied conditions to really see how my new V-Strom would perform – which it did, and admirably. Even with my physical limitations, I was pleasantly surprised how well the bike handled, regardless of the different road conditions. I felt well balanced on the bike, and that instilled confidence almost immediately. 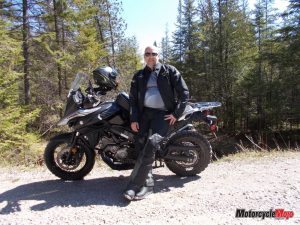 Fast-forwarding a couple of years to the present day, I have 23,000 km on the V-Strom and I thoroughly enjoy riding it. The bike has its cons at times, such as limited ground clearance and suspension, along with no ABS shut-off switch. However, the ABS can be disengaged by either removing the fuse or running the bike in gear on its centre stand, but this still proves to be quite aggravating. Regardless, the pros definitely outweigh the cons, and a V-Strom can truly get you through many places, both on- and off-road. I pivoted my handlebars forward a little to aid in handling the bike while standing on the pegs; however, doing so makes cruising on the highway a little more uncomfortable for my shoulder.

I average 400 to 450 km per tank of fuel, which is fantastic, and the instrument cluster provides ample information for my needs even though it isn’t a fancy TFT display. Having a fancy display would only increase the cost of the bike anyway.

As I look back on how I arrived at this point and the misfortune I encountered a few years ago, I realize my life has changed from its original path – and I am beginning to accept that. Other riders have not fared so well in motorcycle accidents, and I consider myself fortunate. I am truly grateful to be here, enjoying my family and friends and still able to ride a motorcycle. My accident provided an opportunity for good fortune to come my way in the form of a Suzuki V-Strom.