We knew the weather could be sketchy during a ride to Northern Ontario at the end of September, but the colours more than made up for it.

If there is one thing Ontario and Quebec are known for it’s Nature’s autumn palette. As summer changes over to autumn, the days remain warm while night temperatures drop significantly, and the vast tracts of hardwood forests that reside in the Canadian Shield region of Northern Ontario and Quebec turn into a spectacular riot of colour. Thousands of motorcyclists head out for day rides or weekend rides to experience Nature’s blanket of green’s transformation into a seemingly out-of-control palette of reds, oranges and yellows for as far as the eye can see.

Timing is everything to catch the maximum feast for the eyes, as there is a short window of opportunity when this explosion of hues is at its finest.
I borrowed a 2020 BMW R1250RT – to my mind, one of the finest touring bikes on the planet – for a week, and I had to make the most of my short time with it. I tried to think back to the last time I went on a multi-day trip just to see the colours and realized that it was many, many years ago. So, instead of a few day trips in my immediate area as time permitted, I rearranged my schedule to have a week off from riding my desk and ride the RT north to cash in on the vibrant colours of autumn on the Canadian Shield. 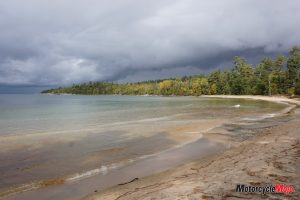 Gwen, my wife, was willing to go, but one of our concerns was leaving for a ride of that distance at the end of September and stretching into October. I consider that a fairly late time of year to be heading to Northern Ontario and the shores of Lake Superior – weather in the autumn, especially on the north shore of Lake Superior, can change drastically very quickly – but I had a bike that needed some kilometres put on it. The RT has very good weather protection, thanks to a well-designed fairing and power windscreen along with heated grips and seats. (The rider and pillion seats have separate temperature controls.)

We left Eastern Ontario early in the morning in order to arrive at our destination of the Red Top Motor Inn in Iron Bridge, Ont., about two hours west of Sudbury. The day’s ride would take about 7.5 hours of riding time, and anyone who has ridden any distance by motorcycle knows you can add a couple hours onto that number for gas stops and food. Our first day would be the longest riding day of the trip, but the idea was to get into the autumn foliage as soon as possible and then enjoy easier riding days.

The Temperature Started Out Good

We left during drizzling rain, but at 20 C that was okay. We had proper riding gear and, as mentioned previously, the weather protection on the RT is exceptional. Some of the rock cuts on Northern Ontario’s highways are engineering marvels, given construction crews would have blasted through thousands of tons of Canadian Shield granite to make the roadways. The scenery and riding along Highway 118 is one of my favourite rides when heading west.
Some of the rock cuts had perfectly…