The last ride of the season fulfills a lifelong dream.

Saint-Louis-du-Ha! Ha! is just fun to say. Never mind that it’s the only place name in the world with not one but two exclamation points. The “Ha! Ha!” may originate with the old French word meaning “barrier,” which in this case would be Lake Témiscouata. No one seems to know who Louis was, much less his spiritual status. But the name remains and the village of 1,300 was my starting point for touring the Gaspé Peninsula – a lifelong dream.

As an “adventure” model, luggage was stock and the aftermarket lowered seat meant that I did not need the bar risers from my old machine. It was a perfect fit. Nimble on gravel, smooth and solid at highway speeds, she was a delight.

As I rode along Highway 232 through St. Esprit and St. Gabriel, my route opened onto one spectacular valley after another with terrain so steep I wondered how they farmed it, but farm it they did. The road then led to a trench cut deep into the Appalachians by the Matapedia River. I stopped to watch two men standing waist-deep, fly-fishing for salmon – one of the river’s prime species. A stretch of old Hwy 132 that parallels the riverbank permitted wild camping, and I found a site with a picnic table beside a spring of potable water that trickled peacefully all night.

As I entered the covered bridge at Routhierville the next morning, the sound of my V-Strom’s engine roused a homeless young man who had found shelter for the night under the wooden roof. I gave him my lunch of trail mix, and he was excessively thankful. I wished him well. And was mindful of my blessings.

Hard to Get Lost 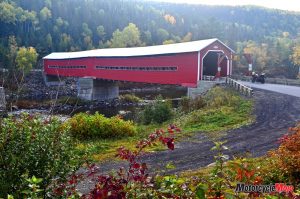 Navigationally, the counterclockwise route in the Gaspé is a simpleton’s dream: follow 132 and turn left, then continue on 132 and turn left – just like in NASCAR – all the way around the peninsula. However, I made an extra left inland at Carleton, which meant a sudden ascent from sea level to 555 metres on a road with a 15 per cent grade. I wanted to visit Oratoire Notre-Dame-Du-St-Joseph, a church on the cliff overlooking the Baie des Chaleurs. The farmland, marina and lagoon below the mountain looked like part of a model railway.

In New Carlisle, I had to stop every 200 metres and snap another photo of brightly painted fire hydrants depicting cartoon characters and making clever use of the hydrants’ shape. Just west of Percé, I inquired about a tour of the Magasin Général Historique Authentique 1928. Even though I arrived at closing time, two hosts dressed in early 20th-century garb welcomed me and eagerly gave me a tour. They switched to passable English when they realized I spoke less than passable French. The hosts, who were brothers, had restored their father’s store to its glory days and established a museum of which they were justifiably proud.