Italy-based Bimota’s 2019 announcement that Kawasaki Heavy Industries had acquired a 49.9 per cent share in the born-again boutique manufacturer and the news that the supercharged Tesi H2 would be the first model created under the new partnership really hit the headlines. Production began in October 2020 at the rate of 20 bikes per month, thus reviving the Tesi name exactly 30 years after it first reached the marketplace with the Ducati-engined Tesi 1D. As Bimota’s strapline succinctly puts it: “The Revolution Continues!” The company’s goal is to bring the claimed benefits of enhanced handling – created by separating the suspension, braking and steering functions by means of the Tesi’s trademark hub-centre design – to a new generation of customers via the fastest street legal motorcycle the world may ever know.

That’s according to Dr. Tesi, aka Pierluigi Marconi, who conceived the design almost 40 years ago in conjunction with Roberto Ugolini, a fellow student at Bologna University. Kawasaki executive Hiroshi Ito, the new project’s mastermind, contacted Marconi in October 2018 to alert him to the possibility that Bimota might be revived and to sound out his availability to rejoin the company should that happen. If so, what kind of bike would Marconi like to build first?

Designed in the Mind 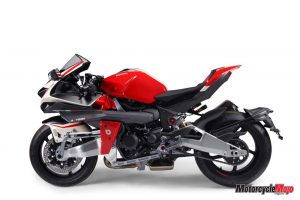 “The first thing Kawasaki asked me was ‘What about making a motorcycle with our H2 engine?’” recalls Marconi. “I said it would be a beautiful thing to use the most powerful engine in the market, but I’d need everything – not only the engine – so what else could Kawasaki supply me with? They replied, ‘You can use anything you like – we are completely open. Just tell us which kind of motorcycle you’d like to make.’ I told them I’d like to develop a Tesi with the H2 engine – and they said, ‘Great! Let’s start.’ So we did!”

Work on the Tesi H2 officially began in May 2019 and the finished product was unveiled at the EICMA show six months later – an incredibly short time span for an all-new model, achieved only because Marconi began sketching out the proposed layout in his mind ahead of time. “The previous December, I began to think how [the Tesi H2] could be made,” he says. “So when we began in May, everything was very clear. We got really great support from Kawasaki, which more than lived up to its promises and gave us everything we asked for. The entire Tesi H2 was designed in 3D before a single part was…