The Moto Guzzi V7 has been the brand’s bestseller since that edition was launched back in 2008. The bike remains faithful to the expectations of riders and the reputation of the legendary motorcycle maker, which sold its first units in Italy in 1967. The V7 has become a cornerstone of the product line, the ultimate Italian motorcycle that stands out for its content and design, and which remains highly popular with a wide variety of riders. Still, the smallest Moto Guzzi of the new age never really was a star: engine and chassis performance were not up to date anymore and the bike lacked a certain sex appeal.

But all that is supposed to change with the new 2021 Euro 5 edition of the V7. The engineers at Aprilia (which owns Moto Guzzi) in Noale, Italy, where the new V7’s air-cooled twins were developed, reached deep into their bag of tricks to transform the traditionally naked bike into a mature machine. The revamping is so profound that the marketing department opted to change the name too: just V7, without the progressive numbering with Roman numerals that characterised previous models. That move is a testament to the wide range of changes, which include the chassis architecture and the engine but leave the model’s character and authenticity unaltered.

There are two versions of the bike now: the timelessly elegant Special, with its classic style elements, such as spoked wheels, round instruments, a traditional headlight and lots of shiny chrome; and the Stone, which has a more fashionable “bad boy” image with black components and matt colours, cast wheels and a round TFT display as well as a full LED headlight. 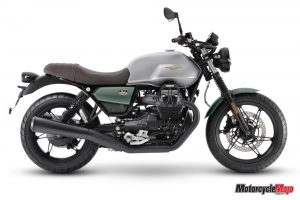 Apart from the differences mentioned above, the two ambassadors of the classic Moto Guzzi family feature the same technical platform. The core of the redesign is the 853 cc air-cooled twin cylinder V-engine derived from the dual-purpose V 85 TT model. The new two-valve engine pushes 65 hp at 6,800 rpm and 53.8 ft-lb of torque at 5,000 rpm through the single-disc, dry clutch to the six-speed transmission. This means a power increase of 25 per cent compared with the previous model.

A suction pump now draws oil out of the crankcase and passes it directly to the pressure pump, thus reducing splashing losses and oil foaming caused by the crankshaft rotating in a wet-sump engine case. The cylinder heads’ steel valves were redesigned, as was the crankshaft. The OHV valve timing is actuated by aluminium pushrods that run on roller tappets on the camshaft at the lower end. The engine features a compression ratio of 10.5:1 and is fed by…