It’s surprising what can come about with an open mind and a bit of ingenuity.

create the ultimate ultrabike or the perfect four-wheeled vehicle. So it’s no coincidence that so many major manufacturers of both two- and four-wheeled machines maintain SoCal design studios and engineering shops; out west is where unorthodoxy reigns, where the improbable achieves reality, and where today’s alternative design becomes tomorrow’s convention. It’s hard to imagine the Feuling W3 Cruiser, brought to market 20 years ago in February, 2001, by 56-year-old Jim Feuling, being built anywhere else.

That said, it’s not exactly true to say no one had produced a radial three-cylinder bike engine before the W3 – Moto Guzzi built just such a prototype in 1987, and there were a handful of such specials derived from radial aircraft engines back in the vintage era. But you could never buy a motorcycle powered by such an unconventional engine package until Jim Feuling decided to put into metal a what-if idea he’d had while working with Harley-Davidson on their Twin Cam 88 engine, which debuted in 1996.

The W3 is Released 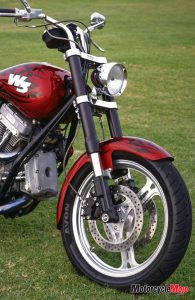 After two years of development, the Feuling W3 Cruiser hit the market, priced at a then-steep $40,000. Dallas star Larry Hagman was one of the first buyers of the improbable but innovative three-cylinder, pushrod, air-cooled bike. Very unconventional, very cool – but very California.

Feuling’s idea was simple and, by converting a Milwaukee engine to provide significantly more straight-line performance, pretty cost-effective. “It would have needed a total of 10 new parts, in terms of tooling,” he told me when I visited the Feuling Motor Company’s shop in Ventura, Calif., a few months before he tragically passed away in late 2002 after a battle with pancreatic cancer. With such relatively simple tooling, it’s a little surprising Harley didn’t take up the idea to expand its range.

The original W3 prototype mainly used Harley engine parts, but the production version almost exclusively employed components of Feuling’s own design. Feuling resolved some compromises inherent in converting a 45-degree Twin Cam Harley engine to a W3 format by cloning one cylinder and its camshaft and rotating them 45-degrees downward on the crankcases.

The only carryover Harley-Davidson component was the five-speed gearbox with belt final drive, which was coupled to a Barnett clutch, beefed up to handle all that extra torque. The 2.5-litre engine was geared to pull a top…