Crossing the New York state line from the east, I was surprised at how richly treed the region was. I had imagined that as I approached the sprawling monster that is New York City, I would face nothing but concrete and traffic. I had, in fact, considered using I-684 to avoid the imagined gridlock, but I was pleasantly relieved as I rode along Sylvan Route 202 and Sawmill Parkway, which rolled along nicely all the way to Tarrytown atop the Hudson River Highlands.

At Lyndhurst Estate, a groundskeeper noticed my licence plate. “Ontario? I’m from Kingston!” he gushed as he stepped out of a garden. We chatted for quite a while and he confirmed my suspicions: “You go five miles farther south and you’ll find exactly the traffic you’re afraid of.” Lyndhurst, built in Gothic Revival style for railroad magnate Jay Gould, is one of several tycoon-era mansions along the Hudson River in this retreat from the Big Apple.

From there, I attempted to visit Washington Irving’s Sunnyside, but, alas, it was closed on Mondays. So, beginning my northward exploration up the river, I stopped at Union Church in Pocantico Hills to view the little-known contributions of two artistic masters: Henri Matisse and Marc Chagall. This church’s prominent stained glass windows, commissioned by the Rockefeller family (who were among the church’s founding members), comprise Matisse’s last completed work (he died two days after completion) and the only cycle of Chagall church windows in the U.S. I was in awe at how much detail my untrained eye failed to see at first, and I thanked my insightful and inspiring guide. 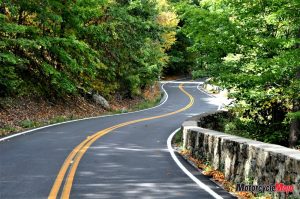 In Sleepy Hollow – yes, it is a real place – I stopped at the Old Dutch Reformed Church, around which centres rumours of ghosts and hauntings, and from which Washington Irving fashioned his Legend of Sleepy Hollow. In fact, several of his characters’ names were taken from tombstones in the surrounding cemetery. Fittingly, Irving is buried there.

While in the area, I had to bypass Kykuit, the Rockefeller mansion, which was also closed on Mondays. I was disappointed not to be able to view the opulent six-storey Colonial-style home with its Ming Dynasty porcelains and an art collection that includes originals by Picasso, Lautrec and Warhol – not to mention the adjacent coach barn filled with luxury horse carriages and automobiles. More to the point, I had learned during my tour of Union Church that John D. Rockefeller’s middle name was Davison – a family name shared by his mother and me.

John D.’s mother was raised in northern New York, and my family hails from the Bowmanville area in Ontario – not so far away. Quite likely there is a connection, I thought, and I wanted to ask someone if I was in line for money. (If anyone has any information leading to the acquisition of said inheritance, I am willing to offer a 10 per cent finder’s fee – and a crisp high five.)

I crossed to the western bank at Peekskill and began the climb into Bear Mountain State Park. I wandered…