Remember the days of turning the key, pulling the choke out and kick-starting your bike to life? You know things have changed when you plug your bike into a computer.

Most modern motorcycles are fuel-injected and equipped with ABS. While those two features are certainly welcome, they can pose some hurdles for home mechanics looking to perform their own maintenance.

Unlike modern cars that use the OBD-II (On-Board Diagnostics II) interface exclusively to connect to a scanner or computer, motorcycles use a multitude of interface systems. OBD-II is the second generation of on-board diagnostics, and in 1996 the Society of Automotive Engineers (SAE) mandated it in North America, thus standardizing the system. This mandate did not extend to motorcycles, so most motorcycle makers use proprietary diagnostic interface systems. Fortunately for me, Triumph is one of the few companies that uses the OBD-II interface. This common system uses a standardized OBD port, into which a diagnostic scanner can be connected. On cars, this port is located under the dashboard on the driver’s side; on motorcycles, the port is usually under the seat or the side cover. 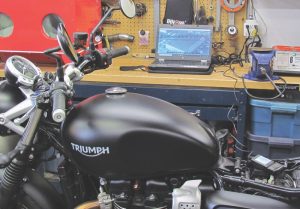 I do have an OBD-II scanner to service the cars in my household, and a quick test revealed that it does, indeed, work on my Triumph Street Twin to relay a multitude of data from various EFI parameters. This can prove useful should the engine light come on because the scanner can display fault codes, the description of which are available in the online Haynes and Triumph service manuals I discussed previously. However, as I discovered when I wanted to replace the three-year-old brake fluid in the Street Twin, that job is not possible to complete without a diagnostic computer that connects to the ABS module – which my scanner does not do.

To change the brake fluid, I had to acquire a DealerTool (dealertoolcouk.ipage.com). This tool is a diagnostic system designed to mimic most of the functions of Triumph’s diagnostic computer, which is available only to certified Triumph dealers. The DealerTool is manufactured in Britain and costs £60, plus £13 pounds for shipping (approximately C$125 in total). The DealerTool includes a computer interface cable, which connects your motorcycle to a computer, and the necessary software – which is the important part. The DealerTool kit also includes a digital key that permits access to one motorcycle. The key, which is unlocked after you buy the interface cable and uses ECU info gathered from the bike you want to register, is valid for as long as you use the tool. You can purchase individual keys for other Triumphs for £25 ($43).

The software requires a PC that utilizes a Windows 7, 8 or 10 operating system. The software will run on a Mac if you use Bootcamp software, which allows you to enable a Windows operating system, although the DealerTool manufacturer does not offer support if you do so. I use a Mac for most things, but I opted to buy a used Windows PC from a computer store for a mere $160.

After a relatively simple setup, I requested and received the digital key for my Street Twin, thus unlocking the DealerTool’s full functionality. Within the ECU is basic info, including the bike’s VIN and the most recent software update. Once connected, the screen prompts you to choose from among the various parameters to be read or various tests that can be performed. Among the things DealerTool can do is test the function of the digital gauges and operate various components, such as the fuel pump, cooling fan, relays and solenoids.

Important for me, the DealerTool has a brake-bleed function, which sends a signal to the ABS module, thus allowing a full brake-fluid change or complete system bleeding. By following the detailed instructions — all of which are outlined on the computer screen — I was able to replace all of the brake fluid – not just the fluid between the master cylinder and calipers, which is what anyone can do without access to the ABS module. 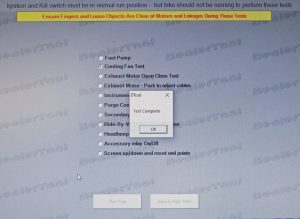 If you don’t own a Triumph, there are interface cables available for various brands that can connect your bike to an OBD-II scanner to diagnose problems, read trouble codes and erase fault codes.

Dealers have access to things that no one else has, including software updates issued by the factory that can resolve rideability issues or simply make the bike run better due to improvements discovered over time.

That said, no one other than me has ever worked on any of my motorcycles. And as long as I have that option, I’d like to keep it that way.