While touring in Kentucky and dealing with mechanical problems, Jeff Davison encountered some of the most genuine people he had ever met. And the roads were pretty good too. 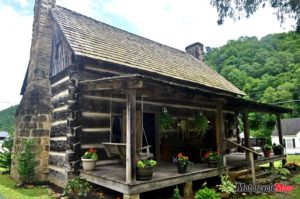 As my bike grumbled and began to lose power, that dictionary definition came to mind. Highway 9006 had begun to wind and climb as the landscape grew deeper and steeper, and the rock cuts were black as coal. I was arriving in beautiful Eastern Kentucky, a region so mountainous and remote that it had been among the last places in the U.S. to receive electricity. The sharp incline I was on revealed a developing mechanical issue with my 650 Suzuki V-Strom: at 5,000 rpm, the engine would bump up against no power, almost as if a governor were installed. With a twist of the throttle, the engine would just grumble and back off. I was beginning to slow traffic, and I recalled a wry observation once made by Neil Peart, the late Rush lyricist and drummer: adventures suck while you’re having them. The silver lining was that I was about to meet some of the most genuine and generous people I have ever known.

After an arduous hour, I limped into the small town of Hazard, where a local recognized the futility of giving me directions to the only mechanic’s shop within a wide radius via the tangle of local secondary roads and actually led me there. Weston, the mechanic, had never worked on a V-Strom before (a typical day consisted of dirtbikes and UTVs), and we spent the afternoon – me acting as passer-of-tools and partner-in-conversation – removing the fuel tank and checking the fuel filter, air filter and fuel pump.

We got to know about one another’s families and backgrounds, and I learned a lot about Suzi’s fuel system. Finally admitting defeat, Weston was all apologies and recommended the large Suzuki dealer 100 km to the north. When I asked Weston what I owed him, he said with a shrug: “I didn’t fix it.” And so that was that. 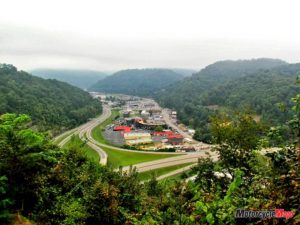 Rain was coming down in sheets as I thanked him and pulled away. But I didn’t go far. After the frustration of the day, a hotel was just too tempting. I found the Daniel Boone Motor Hotel, which, in spite of some frightening reviews, was clean and cheap. In the morning, when I asked the desk clerk (who turned out to be the owner), about a nearby place to get breakfast, he offered to drive me to the local McDonalds. Over Egg McMuffins, he explained how the local coal mines had closed: “Not so much due to politics, as everyone seems to say, but because all the easy coal has been mined.” He pointed through the window toward hills that were completely flat on top. “That’s the result of strip mining,” he said. With most of the readily accessible coal now gone, the mining companies don’t want to bore underground—that’s too expensive.

With no work and no hope…