No agenda and no attitude: This club is all about having fun and helping each other.

Boudreau started riding dirtbikes seven years ago, but with only her boyfriend to ride with, she often found it placed a strain on their relationship. When she couldn’t overcome a tough section of the trail, she found herself getting frustrated with her boyfriend, even though he was explaining things well and remaining patient with her. There was a part of her that felt embarrassed, and she worried that he might think less of her for being a less-skilled rider.
She soon met another woman rider. They became good friends, and bonded through learning to ride together, while having lots of fun. She also found riding with, and sorting through certain riding challenges, with another female rider lessened the strain on her relationship with her boyfriend.

In every sport MC tries, she always pushes herself to do her best, so it was no surprise that in her second year of riding, when she learned there was a local enduro race series through the Pacific Northwest Motorcycle Association (PNWMA), she jumped right in. There were only a small handful of women racing in the event at the time.

Jump in With Both Feet 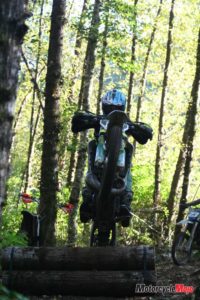 Because of her fantastic experience with riding with other women, MC was always hoping to meet more women who ride and race in her area, but this proved difficult. Realizing that something had to change – and that she could help change it – she decided to approach No Limits Motorsports, the local motorcycle shop in Squamish, BC. She was looking for sponsorship and support so she could go after the PNWMA championship, launch a racing team, and encourage more women to start riding and racing.

At the time, there wasn’t a big interest in racing for women, so MC started organizing fun rides and events in order to make connections, learn and have fun. In Spring 2017, she gathered all the women riders she knew to brainstorm and organize their first-ever event, the Spring Fling.

The Spring Fling proved to be an incredible fundraiser that brought the community together for an evening of motorcycle movies, prizes and music. As a bonus, it was an event that didn’t require their helmets. MC and her fellow organizers donated all the money raised to their local riding club, the Squamish Dirtbike Association (SDBA), and emphasized the importance of all women riders in the area becoming members.

The SDBA was extremely thankful, as they saw their membership quadruple that year, and half of the new members were women. At the following AGM, MC was asked to join the board of directors, as the SDBA were thrilled to see the women’s biking…