A look at the life of Patrick Godet and his exquisite Vincent recreations.

Ironically, the kind of motorcycle that in the past half-century has conceivably brought more fun on two wheels to more people than any other was created in safety-minded Switzerland. That’s the Big Twin café racer, the first of the Egli-Vincent 998 cc V-twins, that Fritz Egli invented in 1965. However, even more improbable, the most dedicated and capable restorer and re-creator of Vincent motorcycles, as well as the most successful Vincent exponent in topline Classic racing, is not an Englishman, but a Frenchman – the late Patrick Godet, French Vincent expert par excellence.

Godet passed away suddenly in November 2018 at the age of 67 at his home in the Normandy countryside north of Rouen, and his loss is keenly felt by Vincent owners and enthusiasts all over the world, as well as by his many friends in the Classic racing scene. Lots of those people have used a vast array of high-quality Godet Motorcycles parts to restore or maintain original Vincents, while other people are fortunate to own one of the 280 superbly constructed Egli Vincent V-twins manufactured by Godet Motorcycles over a 25-year period. These Egli-Vincents, up to 1330 cc in capacity, were produced with the approval of Fritz Egli himself. During that time, Godet produced the only officially recognized Egli-Vincent replicas, one of which Fritz Egli acquired and, thanks to the electric starter installed on all such Godet Motorcycle-built bikes, still rides today despite being well into his 80s.

When it all Began 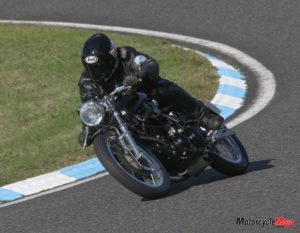 Godet purchased his first Vincent – a Black Shadow – in 1974 at the age of 22. “I saw a couple of British-registered Rapides in Rouen with Vincent Owners Club [VOC] badges and carrying all the gear for touring, and I thought, ‘That’s the bike I want,’” he once told me. “So, when I got back from doing National Service with the Army, I went looking for one. And although for a very short period I first had a Norvin [Norton-Vincent] café racer that was very unreliable, I found a Black Shadow. So, I was involved with Vincent from 1974 onwards.”

Owning, riding and maintaining the Black Shadow led Godet to become totally smitten with the British marque, and rather than go back to working for his dad’s large trucking company, he used his saved military pay to establish a restoration and tuning business concentrating on Vincents, which he also raced successfully in the early days of French historic racing. With the proceeds of this he bought a Black Prince which he used for solo touring, and as…