Checking out a few ghost towns along the Red Coat Trail on the Canadian Prairies.

“You’re joking… Aren’t you? Who goes on holidays to look at ghost towns in Saskatchewan?”

Several years ago, I purchased the book Ghost Town Stories of the Red Coat Trail: From Renegade to Ruin on the Canadian Prairies, by Johnnie Bachusky.

The Red Coat Trail was the route that the North-West Mounted Police – known today as the RCMP – travelled in 1874 through southern Manitoba, Saskatchewan and Alberta as they moved westward. After reading the book, I promised myself that I would visit the region someday.

Most years, I enjoy a touring holiday aboard my motorcycle. Due to the Covid crisis, my plan to ride through Montana last year was thwarted. So, remembering my vow to visit the ghost towns mentioned in Bachusky’s book, I packed camping gear on my bike and headed for southeastern Alberta.

Then, as now, the Red Coat Trail ran through an area with few people, although thousands once tried their luck at homesteading here. The remains of old villages, stores and schools along the trail are a testament to what the land was and remains: a harsh environment for dryland farming.

Flat But Not Always Boring 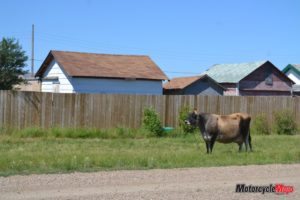 Those of us who have lived on the southern prairies for years enjoy the sweeping vistas and views of the distant horizon. I’ll concede that for some people, there is “nothing to see”; but, if given the chance, the land can grow on you. As I headed eastward along Alberta Highway 61, I rode alongside miles of parked hopper and tanker railcars on the railway tracks. Sitting there perhaps due to the economic slowdown because of the coronavirus?

When I found the village campground in Foremost, Alta., I discovered it was closed to tent campers due to fear of Covid. While the campground was almost deserted and the prohibition did not make sense to me, I grudgingly took a motel room. Although Foremost has a population of only 500 people, the Main Street Café (which I highly recommend) was open the next morning. I topped off the 27-litre gas tank on my bike, as I knew there would be little opportunity to fuel up to the east, where the deserted and near deserted villages mentioned in Bachusky’s book are found.

Highway 61 leads to Manyberries, where I stopped to take pictures. I had not been this way in 30 years, and even back then, the community looked to be on its last gasp. However, some of these old towns just refuse to die. After leaving town, I would not see anyone for hours.

Heading south on Hwy 889, I gloried in the solitude of the horizonwide vistas…