In just a few days, this couple rode from the heat of the desert to the cold and snow of mountaintops more than 3,350 metres high.

Wheeling up on my BMW F650GS to the U.S. border at Tecate on the Mexico side felt more like a “Triple Whopper with fries” drive-thru experience than the usual cacophony of queues and chaos surrounding the more southern fronteras. The two-year familiarity of my old, comforting Latin American life was about to leave me for a convenient New World one. An American immigration official greeted us formally at the barrier. Plenty of instructional “Pleases” and “Thank yous,” but few of the warm pleasantries to which I’d become accustomed in Latin and South American.

Upon inquiring where we might find the Mexican aduana to relinquish our temporary motorcycle permits, the American officer looked at me square on and in a reassuring tone remarked, “Don’t worry, ma’am, you’re safe now.” Having experienced months of colour and contrast, unscathed and far from intimidated throughout the length and breadth of Mexico – right from the southernmost tip of Argentina, in fact – I was curious about the context behind such a statement.
Onward we wended to savour a short but sweet taste of California. And, wonderfully, the hospitality of a San Diego-based family whose social circle comprised a couple of medicinal marijuana drug dealers, a female Olympic gold medallist windsurfer and a well-travelled Frenchman welcomed us. The experience exploded my typical order of things and showed me the endless possibilities through an eclectic mix of people who had been there all along. We then departed, grateful to our Californian hosts, who had warmly facilitated our assimilation back into the Western world. 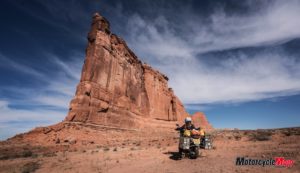 Ahead of us lay yellowish-brown, open country studded with cacti. Arizona was the first place I’d been in a while that turned out to look exactly as I’d pictured it. As we rode along a ribbon of road through rocky desert, slanting sunlight gleamed through an endless pile of white, fluffy clouds extending as far as the eye could see. The ingredients of the ride charmed me.

Without hesitation, I became immersed in the local offerings, including plopping ourselves in the stony Sonoran Desert not far from Gold Nugget Road, just outside of Quartzsite. This town, a magnet for rockhounds and a mecca for the RV crowd, is the boondocking capital of the world. Leaving the snowbirds to it, we parked our bikes and bottoms a respectful distance away in glorious seclusion to watch the sun commence its colourful descent. That sunset was a gem of La Paz County, and got under my skin as much as the rock dust did.

Prescott became our next go-to base, a city that usually boasts perfect weather at around room temperature. We rode among granite mountains and all the worthy lakes, streams and rolling meadows that accompanied them. The countryside is perforated with historical landmarks, and we were struck by the rich history of the Old West. Cowboy-style saloons dotted along Whiskey Row were…