Travel restrictions forced this trio to explore their own province on a five-day, 2,700 km loop.

Keith Tully, John Ritz and I have been doing an annual bike tour for many years now. We plan a trip at the beginning of July, during the world-famous Calgary Stampede, and seek entertaining roads outside of our backyard. For 2020, our plans were to head to the Mount St. Helen area of Washington state; however, everything changed with Covid-19, when borders closed and the Stampede was cancelled for the first time since its inception in 1912.

Alberta had entered its second phase of the pandemic restrictions, so out-of-province travel meant that we would need to self-isolate for 14 days upon our return. None of us were very comfortable with the idea of outside travel, so we planned a five-day, 2,700 km route that circled the province, with a focus on roads less travelled. The route was not the most technically challenging, but it proved to have a nice variety of scenery. 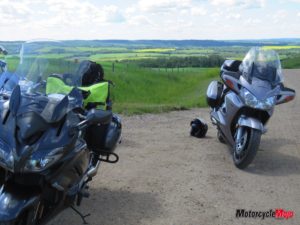 We had an early-morning start, leaving from southeast Calgary. Our decision to stick to secondary highways launched us east on Highway 22 toward 24. At about the 10 km mark, three young badgers crossed the road in front of me with their mother nowhere in sight. This was somewhat prophetic for the rest of the journey as we saw wildlife daily.

We rode south on 24 and 23 to Vulcan, and then east, making our way into the Cyprus Hills where we could see parts of the Palliser Triangle and far away areas of Alberta and Saskatchewan. I was riding my Yamaha FJR1300, Keith was on his Honda ST1300 and John on his Kawasaki Vulcan 1700. The Vulcan has the smallest tank and a comfortable range of about 250 km between fills. While the other two bikes could go farther, at our age, 250 km helps break up the day for our tired, old bodies.

We returned to Medicine Hat for the night and, with the bikes parked, we practiced some sanitary precautions using a brown, bubbly liquid as an internal disinfectant.

John has been considering a backup bike “sportier” than his Vulcan. So, after fuelling up he swapped with Keith and rode the ST1300 for 200 km to Oyen, where we fuelled up again.

From there, John took my FJR for 250 km while I rode the Vulcan. After much contemplation, and more bubbly liquid in the evening, we talked over the experiences, and each of us decided we liked our own bikes the best.

The skies were overcast to start the day but weather slowly improved as we rode north. The wildlife was in full force as groups of antelope scattered the field (and thankfully none ventured across the highway). However, we can’t say as…