Even 90 years after its introduction, the Ariel Square Four is still a well-respected machine.

It’s become a cliché to describe MV Agusta as the Ferrari of two wheels, with each marque dominant in its own form of Grand Prix racing, and each presided over by an autocratic despot. Likewise, its Benelli rival has been described as the Maserati of motorcycles, each the product of the impecunious but passionate endeavour of a band of brothers. But in Britain, there’s a couple of comparable analogies, with Triumph so very much motorcycling’s equivalent to its close neighbour Jaguar, thanks to its sporty Speed Twin and later Bonneville derivatives, while the fast, luxurious Ariel Square Four – whose showroom debut in 1931 marks its 90th anniversary this year – is most definitely a two-wheeled Aston Martin. Moreover, there’s a further connection between these two legendary motorcycle models in that a single man was responsible for creating each of them: Edward Turner.

Turner would later become the most powerful figure in the British motorcycle industry, but back in 1927, during the peak of motorcycling’s post-First World War boom years, he was an impoverished 26-year-old former merchant seaman who’d become a Velocette dealer in Peckham, Southeast London, and, without any formal engineering training, had designed a 348 cc single-cylinder OHC engine. He went through various means of driving its camshaft, but ended up with a vertical shaft and bevel gears for an engine powering the Turner Special, a motorcycle of his own construction.

Turner advertised the bike for sale through his small Chepstow Motors shop, but the £75 asking price was pretty steep at the time, and it’s unlikely he found any buyers – certainly, no such bike has survived the passage of time. But several articles about its design appeared in print, and it was as a result of one of those articles that, in March 1927, the Birmingham-based Ariel marque’s dynamic sales and promotions manager, Vic Mole, visited Turner’s shop to discuss it with him. Mole left unimpressed by the 350 single, but enthused by another quite different concept Turner had outlined to him, but which so far Turner hadn’t progressed beyond a rough outline: a 500 cc SOHC square-four engine. 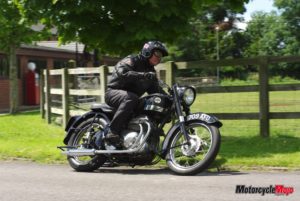 Mole reported back to Jack Sangster, the owner of Ariel – and one of the most astute figures in the history of the British motorcycle industry – who invited Turner to visit the Ariel Works factory in Selly Oak, just south of Birmingham. There, Turner duly convinced Sangster of the viability of his innovative square-four design in overcoming the disadvantages of a car-type in-line four…