It doesn’t take much effort to do the right thing

Motorcycle-related online web forums run ablaze when someone asks what kind of oil they should use in their motorcycle. Opinions vary widely, as do brands of oils, brands of motorcycles and the drain bolt torque specifications. Well, we’re not here to settle the oil argument. We’re here to tell you what you should do with the engine oil you’ve just drained from your bike.

The main thing to understand about used engine oil is that it is still useable, and it is still valuable after it’s done its job of reducing metal-to-metal contact in your bike. Used oil isn’t worn out; it’s just dirty. Therefore, it can be cleaned. But none of those reasons are why you shouldn’t be chucking it down the nearest sewer drain, spreading it into soil or throwing it out in the trash. I mention these improper oil disposal methods because I know a few people who’ve done so in the past. Disposing of motor oil in that manner is illegal and, more important, it is extremely harmful to the environment. 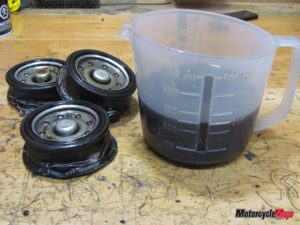 According to the U.S. Environmental Protection Agency (EPA), improperly discarded oil from a single oil change can eventually contaminate almost four million litres of fresh water. Oil takes a very long time to degrade and it’s toxic because it contains heavy metals. While oil is really good at keeping metal parts from destroying themselves inside your bike’s engine, oil is bad at pretty much everything else.

When I buy engine oil, I try as often as possible to buy it in larger four-litre containers rather than one-litre bottles. First, larger containers use less plastic, which is also harmful to the environment when thrown out, but also because the oil is easier to pour and used engine oil can be stored in the emptied container. I keep a couple of empty single-litre oil bottles handy, which I use to store the new oil that remains after an oil change.

But don’t forget to discard more than just the oil that came out of the drain plug; you must discard the oil in the oil filter as well. If the filter is a cartridge-type one, you can extract most of the oil contained within the filtering element by simply placing it in a funnel for about 10 minutes and letting the oil drain into the used-oil container. If the filter is a screw-on type, you can do the same by placing it open-end down in a funnel. However, screw-on oil filters often have rubber check valves to keep the oil from draining into the engine while it is at rest, and these valves will prevent the oil filter from draining completely. Stuffing a small screwdriver into one of the oil filter holes will open this valve and let more oil drain out.

If, like me, you’re really fussy when dealing with used engine oil, you can crush the oil filter to squeeze out the remaining oil. Admittedly, that last step isn’t easy if you don’t have access to a press. I have two presses in my shop, so I made a makeshift oil-filter crusher. I was surprised to discover that even after an oil filter sat in a funnel for 10 minutes with the check-valve forced open and no more oil dripped out, I was still able to squeeze another 100 ml of oil out of the filter. The metal from an oil filter can also be recycled, so don’t just chuck it into the trash bin. 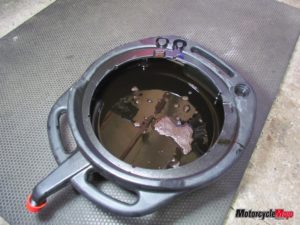 There are two ways used oil is treated. It is either filtered for contaminants and used in industrial furnaces and power plants or used in asphalt, or it is refined again and used to create new, unused oil. This latter process filters, distills and then refines the used oil, then uses it much in the same way crude oil is used. Refining used oil can produce the same final products that crude oil does – new, unused engine oil, other petroleum products and raw materials – but for about one-third of the energy used to refine crude oil. And because used oil is already a finished product — engine oil — it takes much less of it to make new engine oil than it would crude oil, so it’s less wasteful.

Once your used oil is in a sealable container – the repurposed plastic oil container you saved – the easiest part is getting rid of it. The Used Oil Management Association of Canada (usedoilrecycling.com) has links to each province’s oil recycling resources, so you can find out how to dispose of your used oil and filter. But remember, even dirty used oil is still relatively clean, so don’t mix other chemicals into it before disposing of it or it becomes truly useless.