After major modifications, this vintage BMW was transformed into the ultimate long-distance traveller.

Lawyer Moe Warren tells a joke about how he got involved in his law career, and it includes his first job and motorcycles. When he was just a teen, he rode around Calgary on his Honda 150 Benly, delivering prescriptions for Crooks Drugs.

“My friend Bob Hall – he’s a judge now – did the same thing,” Warren says. “So, we often tell the joke that we got our start delivering drugs for crooks.”
Warren has never been without a motorcycle since he was 14. After the Benly and his drugstore job, he rode a Ducati 450 but sold it to go to school. Over the years, he’s owned Harley-Davidsons and Honda Gold Wings. In 1999, he bought a BMW R1100GS and took up adventure touring.

“When those bikes fall over, picking one up is a big job,” Warren explains. “I think I’d just evolved to the point where I thought I’d like something to ride on a more relaxed basis.” 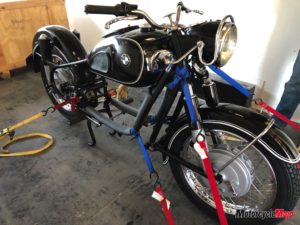 After reading a story in Motorcycle Classics magazine about a restored BMW R60/2, Warren took an interest in classic BMWs. And not just a solo machine; he wanted one with a sidecar.

Five years ago, he began talking to Dave Anderson at Anderwerks Motorrad Spezialist in Calgary about the possibilities. Anderson suggested looking for an older bike with a newer engine – the best of both worlds, as the bike would have a strong frame designed for hauling a sidecar and a more powerful engine to keep up with modern traffic.

Warren located a 1969 BMW R60/2 in Quebec. Its original 600 cc flat-twin engine had been replaced with a R90/6 900 cc powerplant from a 1976 BMW. However, although the engine ran, a major part of the conversion process had not been completed; the original BMW driveshaft, which ran through the right side of the swingarm, did not align with the newer five-speed transmission output shaft and would need some careful engineering and modification.

Nevertheless, Warren bought the BMW sight unseen and had it shipped to Calgary. Meanwhile, as he looked for a sidecar, he called Blue Moon Cycle in Norcross, Ga. Luck was on Warren’s side: Blue Moon had taken delivery of a brand-new Steib 500 for a customer who changed his mind and no longer wanted the sidecar.

“It was unpainted and unassembled, still in its original crate, and I had it shipped to Coutts, Montana, where I drove down and picked it up,” Warren says.
Anderwerks took…