Home / Issues / July 2021 / This Revolution is Just Getting Started

Harley-Davidson introduces a completely new motorcycle and a brand-new engine to a genre the company has never ventured into before.

Here’s a hard, cold fact for Harley-Davidson management: You deserve every bit of skepticism that greets this, your latest reorganization. When you look back at the last 10 years – even longer, in fact – you’ll find you’ve worked pretty darned hard to earn the disrespect of pretty much every biker who doesn’t self-identify as a “one-percenter.” Indeed, Harley history is littered with the “next great things” that the Motor Company seems to trot out every couple of years, only to be quickly cast aside whenever the new MBA gets bored or the winds off Lake Michigan change direction.

The V-Rod died for such a lack of commitment. So did the XRs. Did anyone ever think that Harley was really going to produce electric bicycles? Seriously? Hell, the LiveWire had barely turned a wheel before Harley’s latest management team was pulling the plug on the whole More Roads to Harley-Davidson debacle. And I’m pretty sure the Motor Company set some kind of new record when it managed to buy and sell an entire motorcycle manufacturer – MV Agusta, in case you blinked and missed it – in less than 15 months.

Nor is this anything new. Can you say Buell? Aermacchi? How about the Street 500 and 750? The list goes on. Indeed, the history of Harley-Davidson is rife with “next great things” first pumped, then unceremoniously dumped by the good folks in Milwaukee. Little wonder, then, that the introduction of the Pan America and its new 1250 Revolution Max engine was greeted with equal parts apathy, suspicion and cynicism. 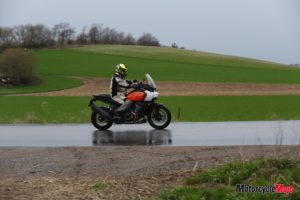 We – as in you, me and literally everyone who loves motorcycles – should be hoping this time is different. We need to pray to God, Allah or whatever god of internal combustion you worship that Harley doesn’t find yet another creative way to screw the pooch, because the new Pan America, is, no word of a lie, one of the very best adventure touring motorcycles you can buy.

More surprising still – you could literally have knocked me over with a feather after my first ride – is that the Revolution Max is, notwithstanding its rather pretentious name, the best engine in adventure touring. For one thing, it’s surprisingly powerful, the 1250 squeezing out 133 horses on Brooklin Cycle’s dyno, which – considering the typical 12 per cent loss between crank and rear sprocket – lends credibility to Harley’s claim of 150 hp at the crankshaft.

It’s never wise to compare charts from different dynos, but the most I’ve seen from a Multistrada 1260 on any dynamometer is 140 hp, and 1290 KTMs seem to range between 128 and…