Finding adventure in the most unexpected places.

Definitions of adventure have been bandied about — even hotly contested — for many years now in the motorcycle community. For me, adventure simply needs to involve surprise and discovery (and maybe a little danger). But having studied a little American history and geography, I was not expecting a great deal of it on this particular ride. My sights were set on Cambridge, Mass., to visit my daughter and son-in-law, where the latter was doing doctoral work at Harvard University — something I was admittedly proud of. I was looking forward to the visit, but I was not expecting “adventure,” and munching miles on uninspiring I-90 East across New York State was doing nothing to sway my expectations. 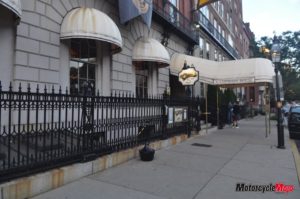 Approaching the Massachusetts state line, however, the increasing undulations of the Adirondacks and Berkshires sparked a smile, and the Mohawk Trail stoked an elated grin. Once a trade route for the Mohawk nation, Highway 2 was a beautifully winding secondary road that meandered over and through mountains abounding in hardwood and pine forests.

Hugging the banks of the Deerfield River, the Trail showed the remains of defunct textile mills, but was also dotted with outfitters, campgrounds, and quaint but unpretentious little towns such as Florida, Greenfield and Shelburne Falls. Perfect riding country.

To the north, I found wild camping in Northfield State Forest, very near the Vermont state line. The single lane of broken pavement soon became rolling dirt, and I was glad my Suzuki V-Strom was sporting Mitas E07 tires. I was less happy with the position of my handlebars.

Perhaps a little more closely related to the ape than most, with my long body and short legs, I had installed handlebar risers and pulled the bars back. This allowed me to sit more upright and comfortable while touring. However, it was when it came time to stand up on the pegs that I discovered a problem. For comfortable off-roading, the bars needed to be rotated up and forward, allowing me to take a (recently learned) correct body position, and also making it easier to reach the clutch and brake levers while standing. 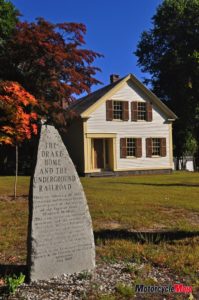 Cooking dinner on my camp stove, I considered how to strike the balance I needed to address both kinds of riding. I finally concluded that bar position could be put in the same category as tire deflation: something to do in extreme or lengthy off-roading, and this wasn’t that. I could make do. Surrounded by a forest of towering Tamarac trees, I nestled into my bivy sack and drifted off to the serenity of cricket-song. The seclusion was luxurious.

Riding toward Leominster (pronounced LEM-inster) the next morning, I noticed several road signs warning of moose and bear. Through the trees I also began to see homes built in the characteristic New England style, with their gabled roofs and dormer windows. While some houses were covered in clapboard…